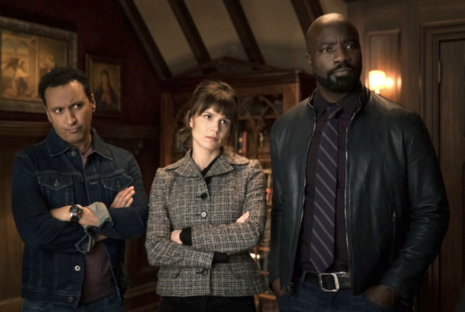 The episode opens with Officer Jim Turley (Corey Cott) pulling over and ultimately shooting a black woman, after he thinks he sees her reaching for a gun, which turns out to be a cell phone. The officer so genuinely believes he saw a gun that he is going to go with an insanity defense based on demonic possession.

That is where the main characters come in, whose job it is to determine whether or not those the Catholic Church brings before them are indeed demonically possessed. David (Mike Colter) is a black seminarian soon to be a priest, Kristen (Katja Herbers) is a lapsed Catholic and a forensic psychologist, and Ben (Aasif Mandvi) is a technology contractor. The three don’t even try to hide their assumption that Turley is racist once they find out he's white.

Bishop Marx: Wait. We need to discuss this.

Ben: What ‘this?’ A racist cop killed a Black mother, and now he wants the Catholic Church to give him a…

Bishop Marx: I want you to meet with him.

Bishop Marx: You don’t know if he’s a racist.

Bishop Marx: We have to learn to withhold judgment. David, as a man of God, you must withhold ju… Where are you going?

A polygraph test reveals that Officer Turley, in fact, did believe he saw a gun. David cynically asks, “Does it matter?” clarifying it “just means he expected there to be a gun due to the driver’s race.” Bishop Marx, however, cuts in to ask, “Is it not also possible that Satan uses racism as a form of diabolical oppression?”

Following up on a lead, David, Kristen, and Ben go to meet with Mick Carr (Fredric Lehne), the creator of the world’s most popular cop show, Justice Served. He’s supposed to be like Dick Wolf and his Law & Order franchise.

In a scene of dialogue that has David sounding like a representative from Color of Change, a Black Lives Matter partner which sees itself as being responsible for forcing television shows to change how they portray police, Carr brags about how he’s positively impacted the industry.

David: Do you think your show…

Carr: My shows. I have five.

David: Do you think they have any influence on the police or how they behave?

Carr: I love these questions, keep ‘em coming. Entertainment is the real issue, right. It has nothing to do with the behavior.

Ben: Yeah, but the lead character on your show, Cliff Locke, he’s a cop who doesn’t play by the rules.

Carr: But he gets the job done.

David: Even though he abuses suspects, badgers witnesses?

Carr: So if a kid plays a video game and shoots up a school, you blame the video game, right?

David: Kids don’t get a badge or a gun.

Carr: Ah, come on. My shows help people know good from bad. Cliff Locke, he-he’s a hero. He’s not an antihero. He’s not Tony Soprano or Vic Mackey, but a real hero, who is aspirational.

Carr: Cliffe Locke makes cops want to be better cops. That’s why the NAACP and the AFL-CIO gave us plaques. That is why there was a 30% increase in POC applications to the NYPD right after our first season. And I’ve increased diversity by 30% across all of my shows. I even pitched a show last year, three POCs in Park Slope, for crying out loud, and they passed on it. You see, I’m not the problem. The problem, I’m afraid to say, is what the, uh, public really wants. You see, you can go out there and scream ‘Black Lives Matter,’ and a whole bunch of people will be with you. Go and write a drama about people screaming ‘Black Lives Matter,’ you see how fast people switch you off.

In fact, MANY people wrote dramas (and comedies) promoting Black Lives Matter - an astounding 127 episodes in the year after George Floyd died - so they don't seem to care if people tune out. Ultimately, it doesn’t matter whether or not Officer Turley was demonically possessed, since he’s not indicted by a grand jury after all.

“That ended the way it was going to, didn’t it,” Kristen cynically asks. “Grand juries never prosecute cops,” David says, while Ben sighs and says it’s “onto the next” case. To top everything off, at the end of the episode, Kristen’s police officer friend, Mira (Kristen Connolly), helps her cover up the past murder of a serial killer named Orson LeRoux.

Mira is firm that Kristen does not admit to anything, also offering that “what happened to LeRoux was justice,” and “some people deserve to die…cops know that better than anyone.” She says she’ll explain away Kristen’s call to the police that night: “I’ll say we saw a black man back here. You came out and scared him off.”

Herbers (Kristen) was quick to talk to the media about her character’s white privilege and they were happy to agree. TVLine’s Kimberly Root opened her article with, “White people get away with murder — both metaphorical and literal — all the time,” before interviewing Herbers:

TVLINE | It’s striking to see her be so solidly allied with David and Ben throughout the episode, then the moment that white privilege can help her, she allows it to. Yes, she’s shellshocked, but she doesn’t stop Mira from letting her go. Do you think it surprised her that she’d so easily accept that unequal treatment?

Yeah. And I think when she said, “Mira, I’m guilty,” she, in that moment, she thought: “This is it. They’re going to now take me to jail. and that’s it. That was my life with my girls. I’m going to be locked away forever.” And then Mira says, “Stop talking,” and I still try to talk when she says, “You need to shush. You’re a white mom of four children, you’re going to be good, we’re going to beat this, and this guy deserved to die.” [Kristen] didn’t kill just anyone. [She] killed a serial killer. So, there’s something to say for that. But also, because we see this storyline of the white cop shooting the Black woman and getting away with that without too much trouble, now [Kristen] getting away with that? It’s an awful thing.

Herbers gave an interview with Meredith Jacobs of TV Insider as well in which she said there’s “a whole different level of guilt” for Kristen because “it’s her white privilege helping her get away with this.” As for Mira’s involvement and racism, Herbers said she’s “the common type of cop that we’ve seen in these situations over and over again in America.”

Over and over again on TV, maybe. Luckily, we don't need shows to help us know good from bad - or evil.