‘Patriot’ Julia Louis-Dreyfus: ‘This Past Election Frightened Me,’ GOP ‘Lost Their Minds’ 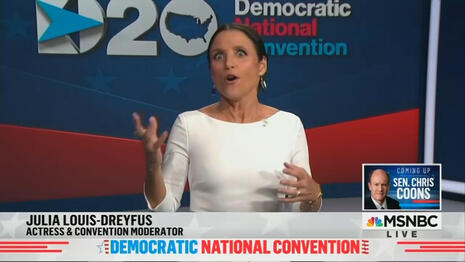 She was interviewed as part of Variety’s Power of Women issue in an article posted on May 6. Aside from covering her life and career in Hollywood, the self-proclaimed "patriot" detailed her efforts to "do [her] duty" shilling for the Democrat Party and fighting “voter suppression.”

The interview covered the DNC host’s work campaigning for Joe Biden and other Democrats in the 2020 election cycle. Louis-Dreyfus said:

I got really involved in the political campaign, the presidential election and all down ballot elections. And it became a kind of full-time, part-time job. I was doing a lot for multiple candidates in swing states, and to fight voter suppression. And it was intense, but it was gratifying, ultimately, because the outcome was good. Although I’m more aware than ever that we have our work cut out for us moving forward…

Obviously, many would disagree that the "outcome was good."

She also brought up the “just incredible” virtual table read fundraiser the cast of Veep did for the Georgia Democrats in the Senate run-off that centered around a past episode involving election recounts. This was after the cast had already raised $500,000 for Wisconsin Democrats in October. Of the absurdist political comedy, the actress said, “[T]here were so many parallels to what happened within ‘Veep’ to what happened in the last four years, it’s quite uncanny.”

Louis-Dreyfus, a cancer survivor, spoke a lot about fear as a motivating factor – how afraid she was during the last election and how the GOP still “scares” her:

I’ve always been politically active. But this past election frightened me. And so, I felt as a patriot I had to do my duty and use whatever tools I had for what I consider to be good. A lot was at stake in this last election, but we mustn’t rest on our laurels here, because a lot is going to be at stake in ’22 and ’24. The Republican Party, in my view, has lost their minds. And this is not even the party of Reagan anymore. It’s something different, and it scares me.

Yeah, I’m sure she was a huge fan of Republicans during the Reagan era.

The left tried to act like Trump was a unique threat, but the truth is, they view anyone right of center as deplorable. The hysterics didn't start with Trump and they certainly won't end with him. Watch Hollywood get progressively worse as they continue to beat the drum against the other half of the country.