In a move that should come as no surprise to Morning Joe viewers, the show’s co-hosts reserved the last ten minutes of Thursday’s MSNBC show for a couple of far-left guests to share their inspiring story about raising big bucks for Democrats.

Actress Julia Louis-Dreyfus, who now spends most of her time campaigning for 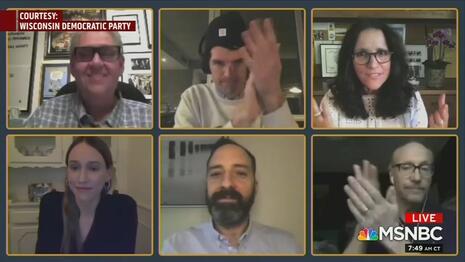 Louis-Dreyfus and Wisconsin Democratic Party chairman Ben Wikler (a former Senior Advisor at MoveOn were met with fawning from Mika Brzezinski and her co-hosts, who recently welcomed stars from The Princess Bride on the show after they similarly raised a big bucket of money for the Democrats in Wisconsin.

Brzezinski, who was clearly thrilled about the Democrats receiving a half-million dollars in the crucial swing state, remarked: “I appreciate all your efforts,” after which Louis-Dreyfus explained that it was hard for her to be funny and that she’s just working hard to “get this fool out of the White House.” When asked for her opinion about Wednesday night’s vice presidential debate, Louis-Dreyfus predictably praised Senator Kamala Harris, saying that “she hit it out of the park,” and “[S]he’s incredibly fabulous in every way.”

A lot of voters are facing [challenges] across the country from Wisconsin down to Texas and Florida. It seems that Republican governors, Republican politicians, Republican supreme courts are doing everything they can to limit access to voting. Especially for brown and black voters in states, again, across America. What is the situation that’s in Wisconsin right now? Do you feel comfortable that everybody that wants to vote is going to be able to get out and vote in this election?

Yawn. Unsurprisingly, Wikler conjured up a rehearsed spiel assuring viewers that voting is easy. Brzezinski and Scarborough asked Louis-Dreyfus for more political wisdom, and oblivious to any opposing viewpoint, she desperately stated:

I’ve got to—I choose to be optimistic. I choose to believe in the power of the people and vote. You know, the Republican Party is very good, or tries to be very good at voter suppression and, frankly, I think that’s really all you need to know… I’m really hopeful that Joe Biden will win. I know that he will lead this country out of this moment with class, with a mature, rational, and shall we say, calm approach to leadership and restore democracy to our nation.

Clearly, the folks at Morning Joe couldn’t be happier about crackpot celebrities raising quick cash for Democrat operatives, but only time will tell if regular Americans in Wisconsin are on the same page.

This echo chamber was brought to you by Skechers, Allegra, and Liberty Mutual. Click on the links for contact information so you can tell them how ridiculous it was.

MIKA BRZEZINSKI: And voters in Wisconsin are being treated to some pretty unique efforts to turn out the vote. We recently sat down with the lead actors from the classic 1987 film, The Princess Bride, who came together with nearly the entire cast to raise millions of dollars for Wisconsin Democrats. Now the cast of Veep has reunited virtually over the weekend to raise more than $500,000 for the Democratic Party in the crucial swing state of Wisconsin.

LOUIS-DREYFUS: For the Wisconsin Democratic Party. How fantastic is that? That’s a [expletive] load of money.

BRZEZINSKI: Okay, I have missed each and every one of those stars. Joining us now, the star of Veep, actress Julia Louis-Dreyfus and chairman of the Wisconsin Democratic Party, Ben Wikler, great to have you both. So Julia, I'm glad -- I appreciate all your efforts, I follow you on Instagram. Loved, loved Veep. I want to ask you, though, about how -- is it challenging to be funny at a time like this because it is actually so damn serious?

LOUIS-DREYFUS: It’s so damn serious, and it's very hard to be funny. And frankly, it's one of the reasons Veep ended when it did because we really couldn't compete with this White House. They were doing a better job at incompetence and buffoonery than we were. Except in their case, it wasn't funny. And so I'm working overtime right now to get this fool out of the White House and his minions and in so doing, perhaps we entertain, like we did raising money for the Wisconsin Democratic Party just a couple days ago which was incredibly fun, and I think people get a great -- get a great kick out of watching it. We did deleted scenes and we- from our show, and we listed a bunch of insults we never used on the show, and you can still watch it I believe, isn't that right, Ben? I think?

BEN WIKLER [WIS. DEM PARTY CHAIR]: You can watch it at Wis-- you can watch it right now if you go to wisdems.org/veep. The replay is there, and I would be remiss if I didn’t mention, on that page you can click to sign up for virtual phone banks and chip in to help get out the vote and end the Trump Presidency by turning Wisconsin blue this fall. Hey Julia, it's Willie, good to see you both this morning. Forgive me for asking the obvious question.

WILLIE GEIST: But since you did play the “veep,” what did you think about the vice presidential debate last night?

LOUIS-DREYFUS: You know what? I thought it was absolutely amazing to watch. I cannot get over how he -- with a smile on his face kept interrupting Kamala Harris. I think many people, women in particular, are astounded by that fact. And I think she hit it out of the park, per usual. She's incredibly fabulous in every way, and I was delighted to watch it. But I do wish the Vice President had, shall we say, better manners?

JOE SCARBOROUGH: So Ben, let me ask you about the challenge a lot of Democrats are facing across the country, and really not even Democrats. A lot of voters are facing across the country from Wisconsin down to Texas to Florida. It seems that Republican governors, Republican politicians, Republican supreme courts are doing everything they can to limit access to voting. Especially for brown and black voters in states, again, across America. What is the situation that's in Wisconsin right now? Do you feel comfortable that everybody that wants to vote is going to be able to get out and vote in this election?

WIKLER: You know, the Republican efforts to mess with the vote come from fear and desperation because they realize how powerful these votes will be for voters across race. White, black and brown alike. And in Wisconsin, there are a lot of ways to vote that are convenient and simple. You can vote absentee, you can vote two weeks early, you can vote on Election Day. Votes will count in Wisconsin. We have a huge team, and there are so many public servants dedicated to making that happen. So the question now is having, you know, summing up the energy to go and cast those ballots. And we're doing that. We have more than 750,000 absentee votes already --  excuse me, more than 550,000 absentee ballots already in, in the State of Wisconsin, which is a spectacular number and people are voting, I think shattering records across the board. So whatever the Republicans are going to try to do, they're doing it because they're afraid of voters and, frankly, Wisconsin is a pro-voter state. We believe in democracy and we’re going to make sure that those ballots determine the outcome of this election.

BRZEZINSKI: Julia, I’m curious about your plans for the final days of the election, and I think about places like Wisconsin, where, unlike the complete denial that is happening in the White House as the President, you know, bloviates around the place with coronavirus, and the numbers of people with coronavirus are really not even being released. We have to kind of guess. ABC has one number, 34. We have another, 26. We know of some at the super-spreader event who are ill right now. And in the hospital. And Wisconsin, for example, where you were doing this great work, they are setting up a field hospital. So it's hard to know where to go and what to do with your energy. But what in these final days will you be doing to try to get out the vote but also get out the facts?

LOUIS-DREYFUS: Okay, well, I'm doing everything that I can safely. And, which includes talking to you right now from my kitchen. And I'm doing all sorts of stuff with fundraisers. I'm doing another fundraiser to -- for the boundary waters wilderness in Minnesota later today with Senator Al Franken and this is in an effort to protect those -- that wilderness from a copper mining situation that the Trump Administration is trying to jam through this pristine watershed, and, which is unconscionable. And in supporting candidates who are in favor of protecting that wilderness. And so I'm doing that later today. And I'm out there trying to get on my social media pages the information about voting, how to vote early in your state, et cetera, et cetera, and how to register to vote and how to volunteer. And I'm raising money for candidates in the Democratic Party. I feel very strongly this is the election of my lifetime, and democracy is absolutely on the line.

SCARBOROUGH: Well, I was just going to ask you for -- final question, Julia, why you were getting so involved in what you believed, what was at stake in the next 25, 28 days. Your answer is the answer I hear from a lot of Americans. They believe the future of this democracy is at stake. Can you believe we could have ever gotten to the point that we're at right now?

LOUIS-DREYFUS: No, it's absolutely surreal. And you can -- I will admit, I have moments of real despair over it, but I can't stay there. I've got to-- I choose to be optimistic. I choose to believe in the power of the people and the vote. You know, the Republican Party is very good, or tries to be very good at voter suppression and, frankly, I think that's really all you need to know. Why would anyone want to take somebody's vote away? You know, I don't want to take a Republican's vote away. I don't want them to win, but I'm not about -- I would never think of trying to suppress their vote. And so I think that's really all you need to know. 210,000 people dead from this virus. There's absolutely no plan. There has never been a plan and there is no plan to mitigate this pandemic from this current administration. Appalling. Trying to take health care away in the middle of a pandemic. What the hell? I mean, it's just all so crazy. I'm really hopeful that Joe Biden will win. I know that he will lead this country out of this moment with class, with a mature, rational, and shall we say, calm approach to leadership and restore democracy to our nation.