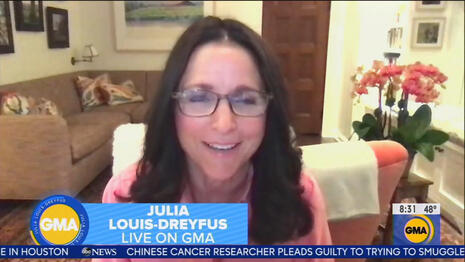 The former Seinfeld star video streamed in with GMA hosts George Stephanopoulos, Michael Strahan, and Cecilia Vega to announce that she and her co-stars on the HBO political comedy Veep are reuniting for a virtual table read to help raise money for Georgia Democrats. If that sounds familiar, it’s because they already did this in October to benefit Wisconsin Democrats.

This time, the cast will be reading from the script of a past episode involving election recounts and other lefty celebs will join in on the fun. Upon hearing the episode was election-related, senior White House correspondent and Trump-hater Vega gushed, "I'm very much looking forward to this!"

The fundraiser will benefit America Votes, which Louis-Dreyfus described as some kind of neutral voter education organization when, in actuality, it is a Soros-funded liberal network that works to elect “progressives.”

Anyone purchasing “tickets” to the Veep reunion presentation is donating to help Democrats take the Senate in January. So, it’s no surprise that former Clinton staffer Stephanopoulos and co. were more than happy to have her on to promote a benefit for their fellow libs.

Strahan: We know that you reunited with the cast of Veep for a virtual table read on Sunday to benefit America Votes. Can you tell us about that?

Louis-Dreyfus: Yes, that's going to be this Sunday and we're all getting together to read a particular episode of "Veep" that we made back in 2016 but has uncanny resemblance to this most recent presidential election and so we thought it would be really, really fun to get together and read an uncut version of it so there will be a lot of material in it that isn't actually in the finished version and all to benefit America Votes in Georgia which is a marvelous organization about educating voters, informing voters, helping people to -reminding people that if you're under the age of 65 you have to reregister to get your mail-in ballot. They're getting all that messaging out which is critical, of course. So we're really happy to be helping them out and it should be a gas just to get together and read it. It was a really funny, this episode in particular is really funny, the "Mother" episode from season 5.

Vega: As someone who is covering the election and still covering it because they're still fighting about it, I'm very much looking forward to this. A little break from reality. You have big guest stars joining us. Who is in the lineup.

Louis-Dreyfus: Yeah, we've got Stephen -- we have a few people come in to help read various roles. Stephen Colbert, Kumail Nanjiani, Beanie Feldstein. Don Cheadle and Paul Scheer are all kindly helping us out to have a good laugh.

Stephanopoulos: I think we're all surprised that reality is matching "Veep." [ Laughter ]

Louis-Dreyfus went on to bash Trump’s “outlandish behavior” as the reason for ending Veep and the possibility for a revival of the show in the future because Biden is a “real leader:”

I mean one of the reasons we ultimately served the end of the show, it was impossible to compete with the Trump White House. They seemed to be sort of outdoing us with this outlandish behavior… [Trump]’s just like doing a better version of our show except it's not even remotely funny -- but now I think with a more of a normal human being, shall I say, a real leader in the White House, Joe Biden, I don't rule out the idea of maybe getting back together to do some version of Veep at some point down the line.

At the end of the segment, Stephanopoulos worked in another plug for the liberal get-out-the-vote project, reminding viewers, “All of you at home can get tickets to the Veep live virtual table read happening Sunday, go to showupforgeorgia.com.”

ShowUpForGeorgia.com redirects browsers to an Act Blue donation page that says “Win Georgia & Attend Veep Uncut Hosted by Stephen Colbert! Chip in Now for Tickets!” Stephanopoulos pretty much provided an in-kind contribution by advertising it to millions of morning viewers. So, basically, it was a regular day on GMA.

This segment of GMA was sponsored in part by Giant, let them know what you think of the liberal media helping Democrats!