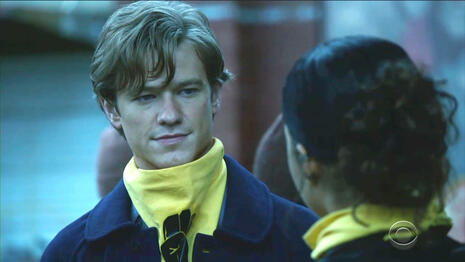 In the March 26 episode of MacGyver, “C8H7ClO + Nano-Trackers + Resistance + Maldives + Mind Games,” MacGyver/Mac (Lucas Till) and Riley (Tristan Mays) are in a fictional foreign country trying to assist their informants who are being repressed by their government.

The informants are said to be "protesting the authoritarian rule of their president and calling for his resignation" and one of them says, "[The president]'s violated our freedoms since taking office, jailing those who disagree with him, encouraging police brutality."

Turns out the “police brutality” line was a bit of foreshadowing.

Leading up to a protest, Mac ends up revealing to Riley that he engaged in the Black Lives Matter protests last summer. He’s “embarrassed” to share that with her, and not because of the terrorizing nature of Black Lives Matter, but because he didn't join the cause earlier. Somehow, Riley is touched that he sees her skin color (apparently she's black) and he's proud to tell her, "Of course I do, I see you," because colorblindness is out and anti-racism that emphasizes skin color is in.

Riley: Police are still out of sight.

MacGyver: This is the part of protests you don't see in news footage. Soon enough, they'll show up, escalate things, and the president will use that footage for spin.

MacGyver: Well, last summer, when I was helping out the CDC in Atlanta, I also went out protesting.

Riley: You were at the Black Lives Matter protests? How has this not come up before?

MacGyver: I was honestly embarrassed that it took me this long to join the cause.

Riley: Better late than never, I guess. I'm curious, though. What made you go?

MacGyver: After we defeated Codex, I had a lot of time to think about the world I wanted to be saving. And that world didn't prop up institutional racism and treat you and Bozer worse than me because I'm white and you're Black.

Riley: Honestly, I... I never really thought you saw my skin color.

MacGyver: What? Of course I do. I see you.

This network propaganda not only promotes Black Lives Matter, with lines about “institutional racism,” but also denigrates our police by implying that they escalated things at last summer's BLM protests so that President Trump could "use that footage for spin."

Sure enough, the police arrive and the protest turns chaotic as the police and protesters clash. Mac has to save the day by neutralizing tear gas equipped with nanoscopic tracking devices.The protesters ultimately win the day at the end of the episode and the president resigns.

BLM and their partnering organizations have infiltrated a growing amount of television programs. It's been the plan all along, not merely with CBS and MacGyver, but with other networks, including and especially with ABC and their most glaring example The Rookie.

Conservatives Fight Back: Advertisers for this episode included Flonase, Emgality, AT & T, Liberty Mutual, Claritin, Capital One, Otezla, H&R Block, and Subaru. Walmart was a repeat offender throughout this episode.