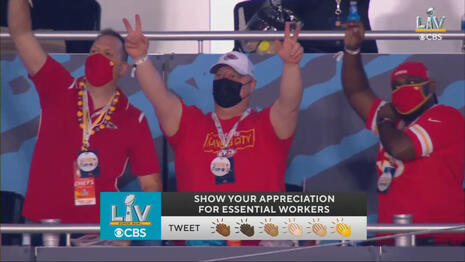 Epidemiologist, I mean, “chief TV critic” Caroline Framke, formerly of Vox natch, whined from her liberal bubble in Brooklyn that “The Super Bowl Shouldn’t Have Looked That Normal” in Variety.

Framke expected “to see a sports event as typically hyperbolic as the Super Bowl brought down to a simmer Amid Pandemic." Instead:

The reality of the event was almost stranger than the strangeness I’d expected. Instead of making obvious changes to reflect the fact that the entire country is in some version of lockdown while half a million people have died, the Super Bowl seemed to unfold basically the same as it would have in any other year. The stands of Raymond James Stadium appeared to be packed, thanks to a combination of cardboard cutouts and the more than 20,000(!) people who had traveled there to attend. While 7500 were reportedly vaccinated healthcare workers and masks were required, the visual of a crowded stadium was nonetheless strikingly normal in a year that’s anything but.

Of course, 22,000 fans were spread out over an outdoor stadium that holds up to 75,000. When someone pointed this out to her on Twitter she responded, “To head this rebuttal off: the piece is about the message the visual of normalcy sends, but also, let's go ahead and consider the ample evidence that 20,000 people traveling during a pandemic to attend an event might be less than ideal.” Ah, I see, it’s not about any actual science or facts (when tens of thousands, maybe more, traveled during a pandemic to protest for Black Lives Matter last summer this wasn’t a problem), it’s about “the message the visual of normalcy sends.” Yeah, wouldn’t want to give anyone any hope that we can get through this.

And let’s not forget, this was the first Super Bowl in history to take place in the home stadium of one of the teams playing, so travel was even more limited than usual. And at least a third of the audience was vaccinated. But, no matter, it’s the visual and it's dangerous! 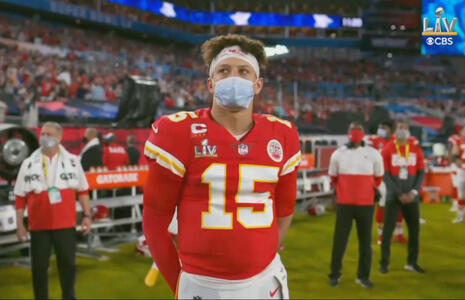 Further destroying any possible credibility a Brooklynite tv critic might have had left when discussing sports, Framke actually began a sentence in her piece with: “After months of watching European soccer...” Could she be any more of an elitist cliché? Anyway, she said European soccer “features fake crowd noise and has only sporadically allowed smaller crowds when local lockdowns permit.” If she had instead been watching months of American football, she would know that’s been the case for the NFL the whole season, too. Even her former employer Vox approvingly wrote about the success of the NFL’s COVID protocols. Again, facts don't matter.

She was even more hysterical on Twitter, tweeting, “Last year, we watched Liverpool win their first Premier League championship in 30 years inside an empty stadium. This year, we watched the Bucs win The Super Bowl in front of 20,000+ people. In between, the virus has only gotten worse. America is broken!”

In Variety, Framke continued to bemoan the visual, despite the reality: “there’s something perfectly, metaphorically fitting about the fact that the Super Bowl looked about the same as always — until you zoomed in to see the truer picture of people shivering in masks.” (Shivering? Once again, she brings her arrogant, uninformed New York City assumptions to Tampa where the weather was in the 60s and people were wearing short sleeves.)

Instead of appreciating all the steps that were taken to try to safely present as normal a Super Bowl as possible or admiring the human ingenuity that went into pulling it off during a once-in-a-lifetime pandemic, apparently, she would have preferred more misery on display because Ms. Sunshine pouted, “nothing’s the same, it’s not okay, and pretending otherwise isn’t going to be what gets us through it.”

Almost one year out and the pandemic scolds still don’t want us to have any hope of normalcy lest it inspire us to live our lives.