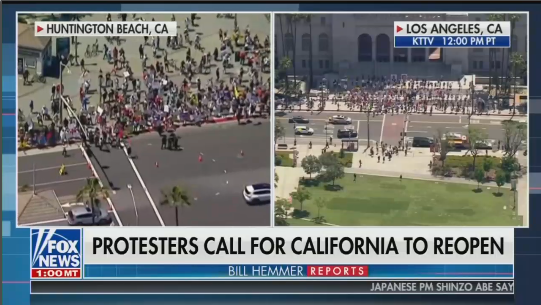 "Racists Are Going To Racist, And This Pandemic Is No Different," blared the headline on Twitter. "‘Reopen’ Protests Are Motivated By Racism, Lack of Concern for Black and Brown Lives," screamed the cover title. A helpful subtitle explained, “This op-ed argues that the calls to ‘liberate’ America are rooted in white entitlement.” All courtesy of everyone's favorite childish social justice warrior mag, Teen Vogue.

Author Kandist Mallett began by complaining about “mostly white bodies who were not wearing masks nor practicing social distancing” on Huntington Beach, California. These beachgoers, who actually were spread out despite deceiving pictures, were blasted over the weekend by online busybodies.

But this is a sign of a larger problem in Orange County, and the entire country, according to Teen Vogue (emphasis mine):

Huntington Beach is home to one of the “reopen" movements, an astroturf protest focused on reopening businesses across America as the COVID-19 pandemic still rages, in a rejection of all things science. A year ago protesters took to downtown Huntington Beach for an anti-immigration rally that turned violent. Huntington Beach and Orange County in general have a strong white nationalist presence. Whether it’s “taking back their country,” “making America great again,” or “reopening America,” the goals of these white Americans are rooted in a desire to return to their white dominance and white comfort.

Mallett blamed the fact that African Americans have been disproportionately affected by the virus on a “long history of government neglect and unequal access to health care” and said the reopening of some states “feels like a big ole racist F-you to Black Americans.” She continued, “It’s almost like once they found out Black people were the most impacted, they became even less concerned.” Yes, malevolent racism must be the problem.

In prime position for criticism in this article is Georgia, whose governor, they were sure to note, “has been accused of voter suppression and took a picture with a notorious racist during a campaign rally.” In some kind of tax dollar savings conspiracy, Mallett explained the reason behind the state opening up as because “ordering Georgia’s heavily Black and brown workforce back on the job relieves the state of having to pay unemployment benefits.” Saving the economic lives and jobs of “black and brown” people certainly was never a motivation!

Yet, according to Teen Vogue, “The same sort of callous logic is playing out at the federal level.” By using the Defense Production Act to keep meat packing plans open, “Largely what Trump is saying is that the country's desire to have meat — and these companies’ bottom lines — is more important than the lives of the workers,” many of whom “are Black and brown, including [illegal] immigrants.” “And screw the white workers affected, as long as we get to kill people of color!” is what I can only imagine Mallett thinks is going through President Trump’s head.

Mallett wants young, impressionable readers to think the protests are all rich white supremacists willing to trade the lives of people of color for their own comfort. As if millions of white people aren’t also out of work, thrust into dire economic straits and wanting to get back to their livelihoods:

The calls from white officials and their constituents to “liberate” America and get the country back to work are rooted in white entitlement. These people want to return to the comforts of their lives even if it costs the lives of the workers providing them. In some of the anti-lockdown protests, Confederate flags could be spotted among the signs reading, “I want a haircut.” The point of some of these protests isn’t that these white workers are eager to get back to their own jobs, but that they want “their help” to get back to work. The parallels to slavery raise themselves.

Because it always goes back to slavery.

After telling an anecdote about an African American health care worker from the Detroit region being repeatedly denied COVID-19 testing before ultimately succumbing to the disease, Mallett complained, “The Detroit area has long shown a lack of care for Black lives; whether it’s through environmental racism, economic failure, or mass incarceration, racists are going to racist,” without explaining that the city has been controlled exclusively by Democrats for decades, many of them African Americans. But, yeah, let’s blame it on white right-wing racists.

To conclude, Mallett cited her own socialist piece titled “The Coronavirus Pandemic Demonstrates the Failures of Capitalism” and declared, “the normal we knew before COVID-19 needs to remain in the past.” This normal was, of course, a racist society:

The society that these white protesters so desperately want to reopen is rooted in anti-Blackness. That society allowed for Black people to die at a disproportionate rate the way it has since we were brought to this country to be enslaved. We must build a new society where Black people are no longer the first to be sacrificed for the elites' mistakes and failures.

Race baiters are going to race bait, and this pandemic is no different.