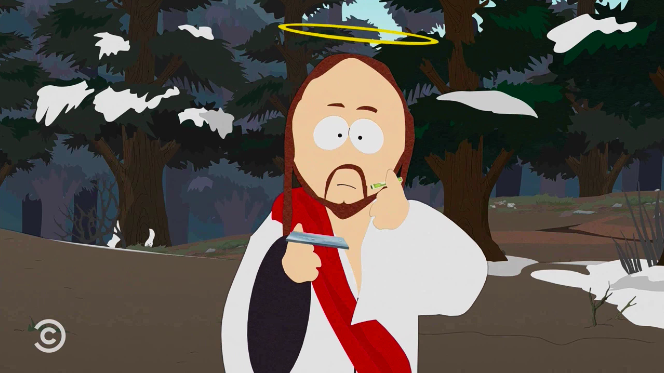 I know it’s South Park and nothing’s sacred, but come on! Did they really have to have Santa AND Jesus snorting cocaine in their season finale Christmas episode?

On Wednesday’s “Christmas Snow” episode, South Park had too many drunk driving crashes so Santa got a county ordinance to stop all liquor sales until January 2.

The people of South Park were in such a funk after losing their holiday spirits that they turned to Randy Marsh to come back to the town with his Tegridy weed. Randy made a special Christmas batch dusted with cocaine. That gave people their holiday spirit back but they started driving around and crashing their cars again.

After Santa got weed banned, Randy started selling pure cocaine to the town and petitioned to have it legalized. This led to Santa going into everyone’s homes at night, a la the Grinch, to steal all the town’s cocaine. Randy came to the rescue to chase Santa for his supply and they both went over a cliff.

Finally, Randy got Santa to try the cocaine and he marveled at how pure it is. Then Jesus appeared and was shown snorting cocaine, too, confirming, "It's a good high."

Jesus then performed the Christmas miracle of making it snow cocaine over the town so the people can go back to driving under the influence.