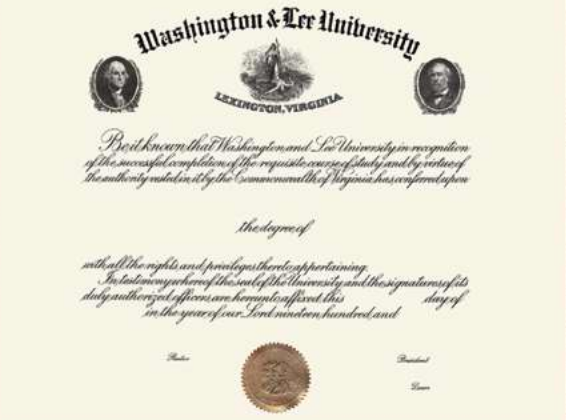 The students at the law school at my alma mater Washington and Lee University, named after George Washington and Robert E. Lee, find the portraits of the school’s namesakes to be so “controversial” and “offensive” that they want the option for them to be removed from the diplomas graduates receive.

In an online petition, the students note they “are not asking for a mandatory change” to all diplomas, but rather the “option” for students to choose to receive diplomas without the portraits.

The goal of establishing this option is to create a diploma that alumni are proud to prominently display in their homes and places of work. Given the aftermath of the 2017 Unite the Right Rally in Charlottesville and the heightened awareness of making Washington & Lee an inclusive and compassionate environment to all students, we believe this request provides alumni the ability to honor their alma mater without the presence of the portraits that some may find controversial or offensive.

As of the time of this writing, the petition has 201 signees, mostly current law students but including some law faculty and both law and undergrad alumni names.

The Generals Redoubt, a “cadre of concerned alumni and friends” who are “dedicated to the preservation of the history, values, and traditions of Washington and Lee University,” put out a statement on Monday opposing the petition. They noted, “Many in our alumni community who have supported the law school with generous financial contributions and jobs for graduates of the law school are very disturbed by this petition.”

Lee, who became the president of the college after his days as a Confederate General and turned the school around, is controversial, to be sure, but is the portrait of George Washington, the first U.S. president and school benefactor, really so offensive that diplomas can’t be displayed prominently with pride? Wait until these people find out who’s on the quarter and one dollar bill!

And if the portraits of the two generals are so offensive, how is having their names in huge letters at the top saying “Washington and Lee University” acceptable? Alas, that is the end goal: to rename the university entirely, which right now cannot happen without a complete alumni revolt and cratering of donations.

I am from the North so there are some ways in which I can never understand Southern veneration of Lee, but I respect and share my fellow alumni’s deep concern about the disregard for honor and tradition that removing Lee (and Washington) from the university would represent.

So while they wait for the rich southern alumni most dedicated to tradition and honoring our namesakes to die off, they chip away at the men in other ways, including equating the sins of Washington owning slaves to Lee owning slaves and fighting against the union in a bloody Civil War that freed the slaves.

First they came for the Confederate flags, then Lee. Make no mistake, if they are coming for Washington in tiny Lexington, Virginia, in the heart of the Shenandoah Valley, they will be coming for him everywhere. This ends here!