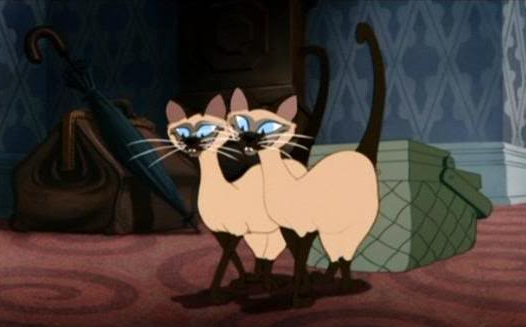 Amidst technical troubles, Disney+ launched Tuesday, including the release of a live-action version of the beloved canine classic Lady and the Tramp. But it wasn’t a glitch that left a song out of the movie, it was political correctness.

The music in question (maybe a better name would be Disney- for subtracting songs) was “The Siamese Cat Song” from the 1955 original, where troublemaking twin cats sing about being from Siam (modern day Thailand). You may remember the jingle, "We are Siamese, if you please."

Decider was all over it, declaring the song to be “problematic” and “reductive of Asian culture,” explaining:

The ‘Siamese Cat Song’ is a racist caricature of what white people thought of Asian people at the time. Their names are racist (“Si” and “Am”), their design is racist (those teeth), their voices are racist (that broken English and accent), and the music is racist (that gong). Their role in the plot is also racist: these Asian [sic] absolutely trash Lady’s home, and frame her for the whole thing. They’re outright villains.

Reading between the lines here, I think they’re calling the scene racist...

But, have no fear! Disney has righted the wrongs of its original by introducing a new song in its place that could not be accused of cultural appropriation, according to Decider:

Instead of having a gong-filled, vaguely Asian sound, “What a Shame” is an upbeat, ragtime-influenced blues number similar to what was popular with audiences in the early 1900s, when the film is set. Instead of this ragtime song, a genre with roots in turn-of-the-century African-American communities, being sung by a white performer (like Peggy Lee singing a vaguely Asian song in the ’50s), “What a Shame” is written and performed by Black artists, brothers and frequent Janelle Monae collaborators Nate “Rocket” Wonder and Roman GianArthur. And instead of the cats being the only characters in the film coded as “other,” the new Lady and the Tramp features a live-action and voice cast filled with performers of color.

This version of Lady and the Tramp is so woke, they’re conscious of the color of animal voice actors!

Decider notes for the Neanderthals out there, “But fans of culturally appropriative, inaccurate, and insensitive musical numbers from 60 years ago needn’t worry: the song is still included in the original animated film.”

So you can watch the original, if you please, or the remake, if you don’t please.