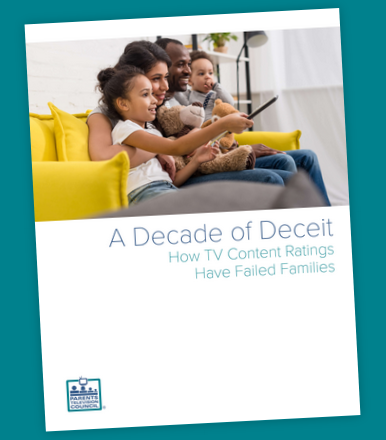 You haven't been imagining it. Network television has seen “a marked increase in offensive content” and “expansion of adult-themed content into shows rated appropriate for children to watch” the Parents Television Council (PTC) confirmed on Tuesday with the release of its latest report on TV content ratings.

Titled “A Decade of Deceit: How TV Content Ratings Have Failed Families,” the PTC’s research indicated that “Networks are packing substantially more profanity and violence into youth-rated shows than they did a decade ago; but that increase in adult-themed content has not affected the age-based ratings the networks apply.”

In other words, the TV ratings system has not changed in the 22 years it has existed, and yet, in only 10 years, the PTC has found that the content on TV has changed dramatically for the worse. The language and violence given a child-friendly rating is shocking.

Violence on PG-rated shows included use of guns and bladed weapons, depictions of fighting, blood and death and scenes of decapitation or dismemberment; The only form of violence unique to TV-14 rated programming was depictions of torture.

The overall number of G-rated shows in 2017-2018 was almost identical to that a decade earlier: five or fewer. Some “sweeps” periods contained no G-rated programming at all.

Despite a significant increase in violence and profanity, the TV ratings system has remained resistant to change. But the PTC says rather than getting less accurate, the ratings system has never been accurate. The reason is that Hollywood is wants to profit off of younger viewers.

There’s a financial incentive for Hollywood to incorrectly rate shows lower than what they should be. Major advertisers stay away from shows rated TV-MA as corporate policy so, according to the Parents Television Council, “By ‘under-rating’ episodes, the V-Chip will not screen out these episodes, allowing children to watch them, thus delivering more viewers to advertisers.”

When it comes to the oversight that is supposed to be provided by the TV Parental Guidelines Oversight Monitoring Board (TVOMB), it’s the fox guarding hen house. Broadcast and cable television networks put out inappropriate content, their own television network staffers rate that content lower than it should be, and those same staffers also serve on the TVOMB which has virtually zero transparency and prevents any changes. The PTC likens this so-called oversight to “Big Tobacco appointing the Surgeon General.”

Unsurprisingly, the PTC report has been buried by the broadcast and cable news shows.