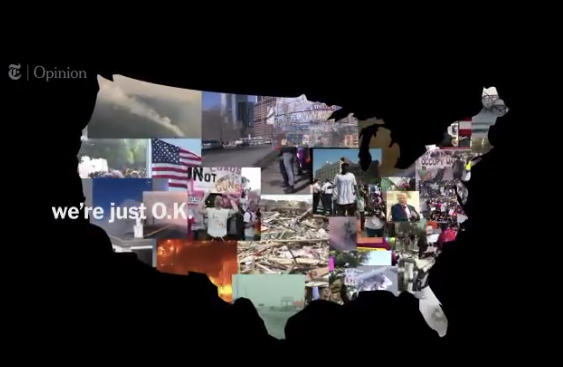 Just days before the celebration of our nation’s birthday, the New York Times tried to rain on our Fourth of July parade.

The Gray Lady posted a video op-ed to Twitter on July 2, along with the message, “The myth of America as the greatest nation on earth is at best outdated and at worst, wildly inaccurate. If you look at data, the U.S. is really just O.K.” The video spends almost 5 minutes explaining why America isn’t so great, interspersed with cheesy stock footage, movie clips, and animations to try to drive home its point.

The video narrator calls the concept of America being the greatest country on Earth “a narrative packed and sold to tiny patriots.” This is “a mythology so entrenched, our most beloved personalities urge us never to question it,” even (gasp) liberal luminaries like Michelle Obama have fallen prey to this awful lie! (They must have caught her on a good day when she was proud of her country.)

The NYT does acknowledge a few things as great: The U.S. “built a kickass democracy, walked on the Moon, and we built universities so prestigious that even Taliban warlords send their kids.” Of COURSE, they would tout our liberal university indoctrination system, mislabel our democratic republic as a democracy, and avoid mentioning how we’re undefeated in World Wars.

They lecture that we are number one in healthcare spending per capita, but we “live sicker and shorter lives, we’re fatter, and globally, we’re more likely to see newborns die – we’re even behind Bosnia. But we have freedom in America. And everyone’s jealous. Or something,” the video scoffs. Tell that to all the people risking their lives just to step foot in the U.S.

After a montage of Republicans talking about “enemies of freedom,” the narrator shrugs it off and says, “Turns out a lot of countries have freedoms.” Name me a country that better protects religious freedoms, free speech, or the right to bear arms. They scold Americans for not “using” our freedoms because of lower voter turnout compared to countries like Australia. Funny how they don’t mention that Australia has COMPULSORY voting! Thankfully, the right to voice your displeasure by staying home is still protected in America.

“So what, besides our economy and military, are we actually number one in?” the video asks. Hold up. That’s a pretty big “besides!” They seriously gloss over the fact that our military and economy are number one to mock that we’re tops on things like civilian gun ownership (apparently this is supposed to be bad), mass shootings, tv-watching, prescription drug abuse, and prison population.

How bad are things to the NYT? “It’s gotten to a point … where you can confuse America for a developing country.” As evidence for this, they beclown themselves claiming that in America, “elections are tampered with,” while showing footage of Stacey Abrams, and “citizens don’t trust uniformed officers,” with Black Lives Matter protests. “Jingoism is dangerous,” they warn while showing President Trump, “Especially when it’s built on old or fake news.”

They conclude by urging us to ”try a more truthful approach. America may once have been the greatest, but today America – we’re just ok.” Hmm, it's almost as if the New York Times is saying we need to Make America Great Again!