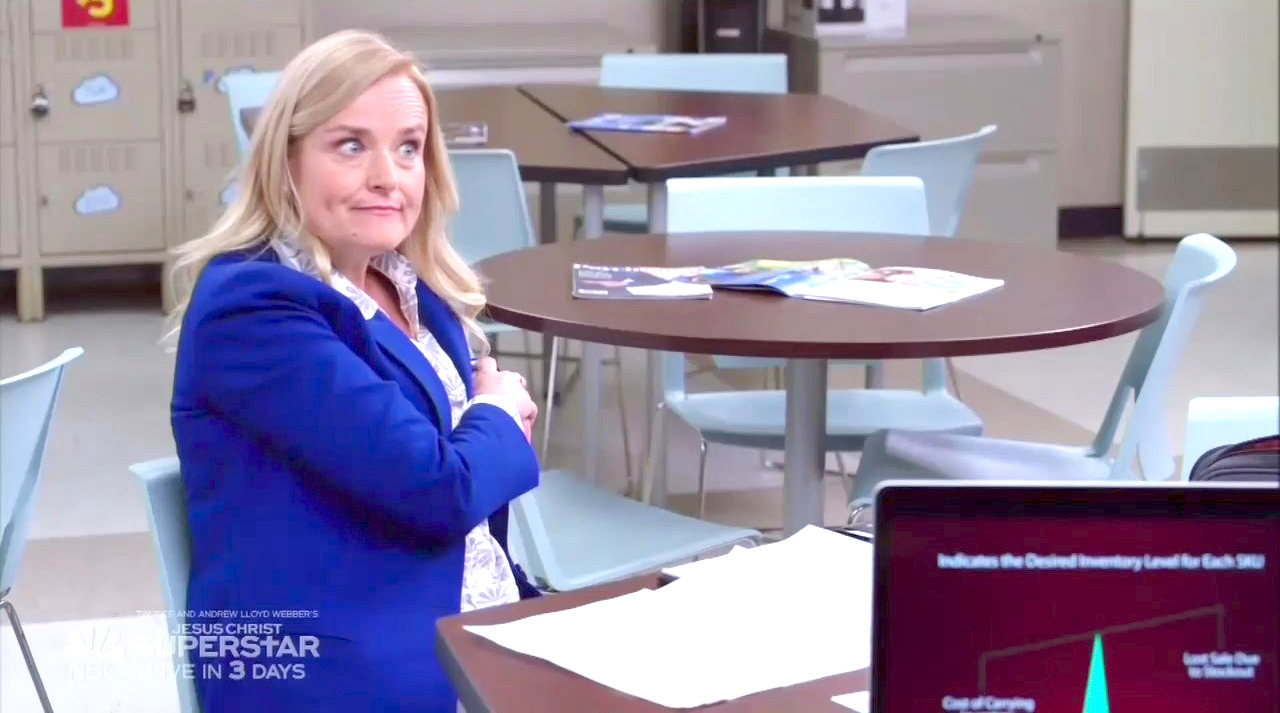 NBC’s Superstore leans in on sexism and falls flat on its face. On Thursday night’s episode, appropriately titled “District Manager,” after Jeff’s departure to be with Mateo, it is announced that for the first time Cloud 9 will have a female district manager, which leads the more liberal-minded employees to rush to celebrate the hire.

The new district manager Laurie is short with them upon introductions so the employees are immediately critical of their new boss, but uptight feminist Amy (played by uptight feminist America Ferrera) insists that the only reason people don’t like Laurie is because of sexism. Of course, liberal brown-noser Jonah (Ben Feldman) is right there with her, ready to declare that women are better than men.

Justine: Laurie seems like kind of a bitch, right?
Marcus: She's like this strict schoolteacher in a porn but nothing good ends up happening. She just, like, teaches.
Sandra: Yeah, and her shoes made a lot of noise. I mean, what?
Amy: Are you guys seriously weirded out by a female boss? It's 2018.
Sandra: You're right. To be honest, I really liked her shoes.
Jonah: You know, a lot of people think women make better bosses than men. It's like they say, uh-- Ginger Rogers did everything Fred Astaire did but backwards and in high heels.
Myrtle: That's total crap. When did Ginger dance backwards?
Jonah: Oh, uh, it's just an expression.
Myrtle: They danced in circles or side by side.
Marcus: You're only defending her because she's a woman. That's sexism.
Amy: If she was a man, there's no way we'd be standing around talking about her appearance.
Jonah: Exactly.

Amy tries to endear herself to the woman, going up to Laurie and striking up a conversation saying, “Hey, um, can I just say, it's-- it's really cool to have a woman district manager. I mean, it's about time, right?” Then she offers up some brutally honest commentary about the other workers, which leads to Laurie deciding Myrtle should be fired.

Amy immediately regrets her big mouth and enlists Jonah’s help in trying to stop Laurie from firing Myrtle. Jonah is visibly shocked upon finding out that Myrtle makes $20 an hour but, ever the good liberal, he recovers and says, “Dude, yeah, no, that makes sense. It's nice to see a woman not just making 79 cents on the dollar.” Ah, yes, that old wage gap myth again: a number – usually around 80 percent - that can only be found by comparing unequal work, i.e. not taking into account hours, experience, or safety.

The employees are all upset at Laurie when they hear that Myrtle’s going to be fired and this leads to a discussion about sexism and the use of the word “bitch” in the break room.

Marcus: It's because she's a bitch. Laurie, not Myrtle.
Amy: Please, Jeff did all kinds of crappy things, and no one ever called him a bitch.
Garrett: When Jeff changed the vendors for the vending machine, you called him a [bleep].
Amy: Yeah, well, that's because the vending machine didn't have any Takis.
Marcus: Sorry, if Laurie is being a bitch, wouldn't the truly sexist thing be for me to not call her a bitch?
Amy: No, that's not the point.
Jonah: Actually, I think I kind of agree with Marcus.
Amy: What?
Marcus: Yes! Red pill brothers.
Jonah: No, I just mean if we had true equality, you could call out women for doing something terrible when they're doing something terrible.
Marcus: Like being a bitch.
Jonah: See, there's that word again. Maybe let's not use that.
Marcus: Don't?
Justine: Yeah, only women can use the word "Bitch," 'cause we took that word back, right, ladies?
Mateo: No, bitch, the gays took that from you.
Amy: Okay, I think we're off track.
Jonah: To be honest, I'm not sure what ‘on track’ would look like.
Marcus: Hey, if Hitler was a woman, would you be defending Hitler?
Amy: No, obviously not.
Cheyenne: What if Oprah hosted the Holocaust?
Jonah: I'm not sure one hosts a holocaust.
Justine: Don't mansplain her!
Amy: Okay, I'm not in favor of any holocaust, but if there was a holocaust, then yeah, Oprah's who I would want to host it.
Marcus: And I actually agree with that.
All: Mm-hmm. - Me too. - Yeah. - That's a really good.
Garrett: I think we solved sexism, guys.

After Laurie tells them she will keep Myrtle if they can make up the money elsewhere, Amy and Jonah find almost $20,000 in savings in the store’s budget. They think that will save Myrtle’s job, but Laurie goes back on her word and fires Myrtle anyway, saying she only agreed to the deal because she didn't think they would actually be able to do it.

Amy becomes disillusioned. At the beginning she’s all “rah, rah, sisterhood,” but by the closing credits, she’s cussing the woman out the same as she would Jeff – in a “gender neutral” way, she proclaims proudly. They really did solve sexism!