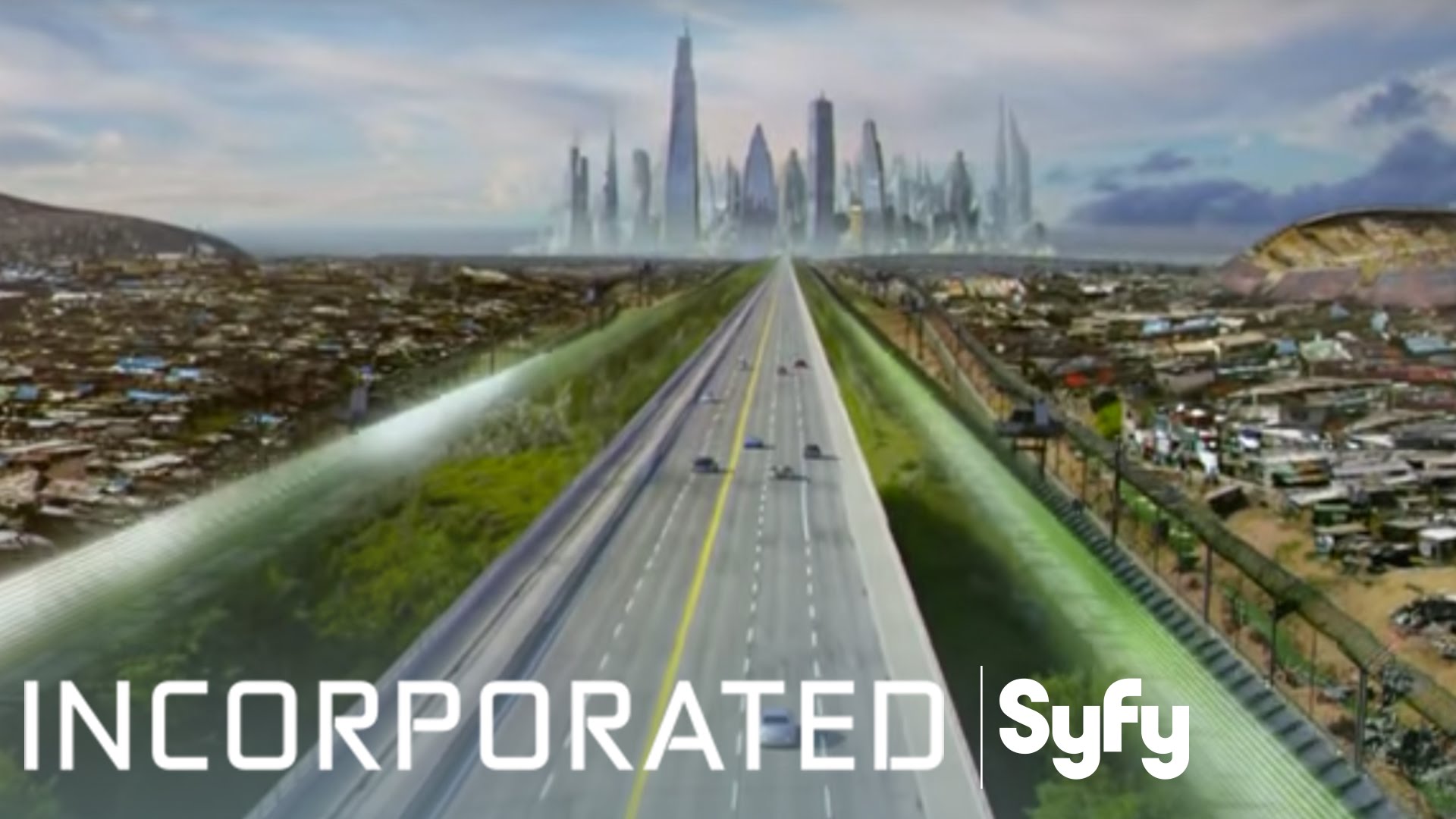 From the first seconds of the premiere, titled “Vertical Mobility,” the liberal agenda is made clear when these words appear on the screen, setting up the premise of the show:

“The year is 2074. Climate change has ravaged the planet, causing widespread famine and bankrupting governments. In their place, multinational corporations have risen in power and now control 90% of the globe. These corporations fight a covert war for market share and dwindling natural resources. Those who work for them live protected behind the walls of the Green Zones. Those who don’t are left to fend for themselves in the slums of the Red Zones.”

The polar ice caps have melted and New York City, half of Rhode Island, and all of Micronesia are said to be under water. The main character, Ben Larson (Sean Teale), watches the news and you can see on the screen the temperature is 82 degrees in Milwaukee in November, while the ravages of climate change are driven home.

News announcer: Meanwhile, Hurricane Zoe has finally made landfall on the coast of Rhode Island. It is yet unclear if the Providence levees will be able to sustain a category-five storm. The material damages could be in the billions of dollars. In other news, the Canadian Prime Minister today announced the construction of a new high-security fence, after 2073 became a record year for illegal immigration. It is estimated that already 12 million U.S. Citizens live in Canadian territory illegally. Gasgo Oil unveiled its third offshore platform on the former Arctic ice cap.

In this liberal fantasy world, murderous corporations run employees’ lives, from granting them permits to have children, to torturing “traitors” suspected of stealing trade secrets. As the head of Spiga Biotech Corporation says when one employee is found to be disloyal, “It's heartbreaking to watch someone bite the hand that feeds them. Spiga is a generous mother. It will feed you, dress you, protect you. In exchange, it only asks for hard work and loyalty.”

The lengths the company will go to protect its power at the expense of humanity knows no bounds. Theft of intellectual property and copyright infringement of genetically modified seeds are used to justify Spiga burning down farmers’ crops during a famine. When a senator tries to push back on Spiga’s methods against his constituents he is reminded he is beholden to the corporation.

But the anti-capitalist screed isn’t limited to corporations in the Green Zone. An underworld mob boss who controls the black market in the Red Zone uses capitalist language in justifying his monopoly as he threatens a man with torture who was caught selling cigarettes without his permission. Because, of course, from a liberal perspective, laissez faire economics can only be bad.

Terrance: MM. This is real tobacco, Theo. No sawdust. And where does a little shit like you get something like this? I like you, boy. Can't make a buck in this world without a bit of an entrepreneurial spirit and a big set of balls. Uh-huh.  But if I let any punk with a set of balls and a pack of smokes sell in my backyard... Well, then supply is gonna exceed demand. That creates what's known as a zero-profit condition. That's no good for anybody, especially me. So this-- This is what I like to call a strategic entry deterrent.

While some of the intrigue and corporate espionage may provide cheap thrills, ultimately the show is too predictable and heavy-handed with its liberal anti-business propaganda to be enjoyable entertainment.