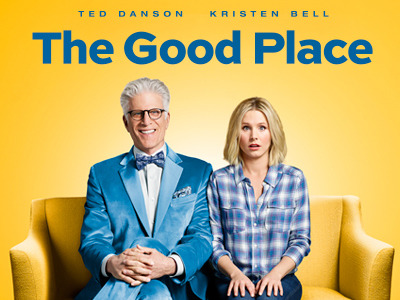 Just in time for Columbus Day coming up next month, NBC's new comedy The Good Place condemns the famous explorer to Hell for "all the raping, slave trade, and genocide."

The Good Place imagines what would happen if the wrong person were let into Heaven. Well, it's not really Heaven - they say Christianity and every other religion only guessed the afterlife only about 5% right - it's the "Good Place." But, just as there's a Hell, there's a "Bad Place" where people suffer eternal damnation.

In the third episode, "Tahani Al Jamil," we learn a few of the people who are in the Bad Place. One of them is Christopher Columbus.

Chidi: Exploring makes me nervous. I have what doctor's call "Directional insanity." I once got lost on an escalator. So not exactly Christopher Columbus.

Janet: Fun fact: Columbus is in the Bad Place because of all the raping, slave trade, and genocide.

Ah, yes, the annual left-wing Two Minutes Hate against the man who discovered America. Liberals just can't resist inserting their demonization of Columbus into our culture, even as they try to rewrite our children's history books.

I won't presume to know where Columbus ended up after he died, but I can definitely tell you where the liberal writers of this show can go...