Fox’s Lucifer has returned for a second season with its comic book version of Satan in the episode “Everything’s Coming Up Lucifer.” After last season’s cliffhanger that God’s wife/Lucifer’s mother escaped from Hell, Lucifer Morningstar (Tom Ellis) is on a mission to find her here on Earth, as he tells his therapist, Linda Martin (Rachael Harris). Lucifer explains the Creation to her and let’s just say it is a bit different from the Biblical one.

Lucifer: Very well. In human terms, once upon a time, a boy met a girl, and they fell in love.

They had sex. The only trouble was, they were celestial beings, so that moment created the universe.

Lucifer: Never knew how appropriate the name was until now, did you? Anyway, they became Mum and Dad. They had a whole litter of kids, including yours truly. And they built a house. They called it Heaven. They were happy. Dad was... Well, Dad, and Mum... Well, Mum was rather lovely in the beginning. But things change, don't they? Dad started going into the garage and tinkering with a little project he called humanity. Mum grew cold... Distant. And pretty soon, they were both neglecting their family.

Linda: And then one of his children started to act out?

Lucifer: Indeed. Yeah... So Dad got pissed off and tossed me out of the house.

Linda: And what did your mother do?

Lucifer: Nothing. She just stood there and let it happen. Anyway, a couple of thousand years later, Dad kicked her out, too. Cast her into Hell and put her in a cell. So, I did the same for her as she did for me. Zilch.

Yeah, God is just like every other Hollywood cliché of a suburban father who hates his life, neglects his wife and family for a pet project, and kicks out his trouble-maker son. Oh, and the Bible is false because it doesn’t include Lucifer’s mom, I guess.

Lucifer introduced a new character this season, a forensic scientist named Ella Lopez (Aimee Garcia), to be the token Christian of the show. You know she’s a believer because she wears a cross, you see. The only problem is, she thinks “the Devil gets a bad rap.” Rebelling against God and helping to bring sin to the world aren’t too bad in her book, apparently.

Ella: You must be Detective Decker's civilian consultant.

Lucifer: I was expecting a different reaction considering your choice of bling.

Ella: Oh. Dude, I had a friend named Adolf. Okay, Adolf. I didn't hold it against him. And besides, I think the Devil gets a bad rap.

Ella: Sure. I mean, what did he really do that was so bad? What, rebel against his dad? Ask some naked lady if she wanted an apple?

Lucifer: Be still my heart. Do go on.

Ella: I suppose he does run Hell. That's not so great, you know, with the torture and eternal damnation.

Lucifer: I’m retired. And besides, I didn't create Hell. I just worked there.

Ella: And now you're talking in the first person. Wait. Are you...

But then Ella does has an interesting response to Detective Chloe Decker’s (Lauren German) questions about God, saying that doubt is important to faith.

Chloe: Do you believe that it all really exists?

Ella: What do you mean?

Chloe: Say, angels. Or the Devil. That sort of thing. That's all a metaphor, right?

Chloe: Oh, okay. That’s pretty... I just thought there would be more faith in your faith, I guess. 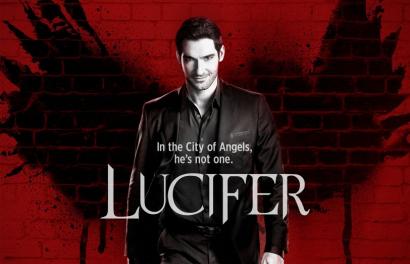 Ella: Oh. No, see, my aunt was a nun, okay? And she always taught me that doubt was really important. Right? I mean, if you don't question something, then what's the point of believing it? I doubt so that I can believe.

Chloe: So, then, if you had the chance to prove it was all real or fake, would you do it?

Ella: I mean, that kind of defeats the point, don't you think? It's faith...

Ella’s story probably reflects the background of the show writers. Their only faith experience is that one of them has an aunt who was a nun and therefore they think that gives them some kind of authority to speak on the topic. That also may be why every so often they hit upon a nugget of truth.

In the next episode it looks like we’re going to meet Lucifer’s mother and hear her story. Can’t wait for more amateur theology!