The women’s Norwegian handball team decided to wear spandex shorts instead of the required bikini bottoms during a Euro 2021 tournament game and were fined $1,700 for “improper clothing.” American singer and songwriter Alecia Moore (aka Pink) is supporting them in their fight against the restrictive guidelines by offering to pay the fine for them. 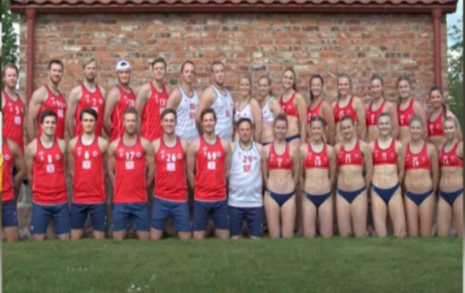 According to the International Handball Federation’s (IHF) playing rules which have been in place since at least 2014, men are permitted to wear a tank top and shorts while women are required to wear “tops and bikini bottoms.” Specifically, the bottoms must have “a close fit and cut on an upward angle toward the top of the leg.” The sport’s Norwegian federation president, Kåre Geir Lio, stated during an interview with NBC News that “it’s not [appropriate clothing for] the activity they are playing in the sand.” It is also different from the rules that they follow in Norway, which allows them to train and compete in “what they want, like the boys.”

The team petitioned to wear the uniforms that they train in at the beginning of the tournament but were threatened with possible disqualification, when it came to the bronze medal game however, they decided to make a statement.

Their actions gained wide attention from news companies all over the world, and Pink showed her support by Tweeting that she would willingly pay the fines for them.

I’m VERY proud of the Norwegian female beach handball team FOR PROTESTING THE VERY SEXIST RULES ABOUT THEIR “uniform”. The European handball federation SHOULD BE FINED FOR SEXISM. Good on ya, ladies. I’ll be happy to pay your fines for you. Keep it up.

The European Handball Federation released a statement about the penalty, saying that due to this “case of improper clothing,” the “Disciplinary Commission decided to impose a fine of €150 per player, for a total of €1,500,” or $1,765.

Norway’s Minister of Culture was angered by the commission's actions as well. She tweeted at the IHF saying “Dear @ihf_info. Can you please stop the forced bikini nonsense at your beach handball games? It is embarrassing, disgraceful and sexist. You are ruining both the sport and your own reputation.”

Lio explained that Norway has been campaigning against the revealing uniform regulations since 2006. They are expected to submit a motion for rule change during an extraordinary congress of the IHF in November 2021.

This is not the first protest in the name of clothing freedom this year. In February there were threats of boycotts from some beach volleyball players when the Qatar Volleyball Association proposed a ban on bikini bottoms.

The International Volleyball Federation also updated their rules ahead of the 2020 Olympics to allow women to play in shorts and t-shirts, or any form of bathing suit.

After years of women fighting for the right to reveal way too much in public, we now see backlash for them trying to cover back up. What an interesting time we live in.