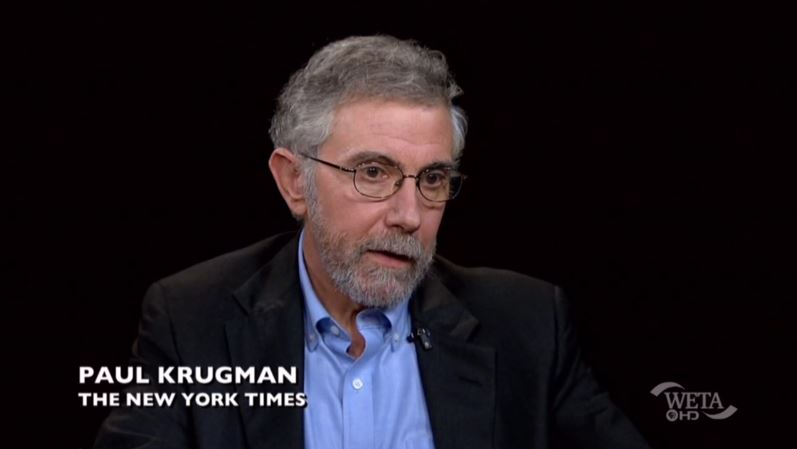 The New York Times wasted no time politicizing the massacre by white supremacist Dylann Roof at a black church in Charleston, S.C. Already reporters and columnists for the paper have soared beyond the tragic facts of the case to sharpen the issue into a political weapon, indicting Republican attempts to protect voting integrity, even comparing opposition to an Obama-care proposal to slavery. Classless columnist Paul Krugman on the U.S. states that are passing up the Obama-care deal on expanding Medicaid: "And what do these states have in common? Mainly, a history of slaveholding...."

Lydia Polgreen's inflammatory Sunday story, "From Ferguson to Charleston, Anguish About Race Keeps Building," made the leap from Charleston to incidents of cops shooting black citizens (even if those cops were later acquitted of wrongdoing), and even voter identification laws:

Over the past year in each of these American cities, an unarmed black male has died at the hands of a police officer, unleashing a torrent of anguish and soul-searching about race in America. Despite video evidence in several of the killings, each has spurred more discord than unity.

Grand juries have tended to give the benefit of the doubt to police officers. National polls revealed deep divisions in how whites and blacks viewed the facts in each case. Whites were more likely to believe officers’ accounts justifying the use of force. Blacks tended to see deeper forces at work: longstanding police bias against black men and a presumption that they are criminals.

Then, on Wednesday night, a young white man walked into a historic black church in Charleston, S.C., and joined a group of worshipers as they bowed their heads over their Bibles. He shot and killed nine of them. In his Facebook profile picture, the suspect, Dylann Roof, wore the flags of racist regimes in South Africa and the former Rhodesia.

The massacre at Emanuel African Methodist Episcopal Church in Charleston was something else entirely from the police killings. But it, too, has become a racial flash point and swept aside whatever ambiguity seemed to muddle those earlier cases, baldly posing questions about race in America: Was the gunman a crazed loner motivated by nothing more than his own madness? Or was he an extreme product of the same legacy of racism that many black Americans believe sent Michael Brown, Freddie Gray, Eric Garner, Walter Scott and Tamir Rice to their graves?

The debate has already begun.

Bryan Stevenson, a black lawyer who has specialized in death-penalty cases and chronicled the legal system’s unfairness to African-Americans, sees deep and systemic connections between Mr. Roof’s actions and the police killings of black males, as well as the rough actions of a police officer breaking up a pool party in McKinney, Tex.

Polgreen compared the shooting in Ferguson, Mo. of Michael Brown -- by a white police officer who was found innocent of wrongdoing by a grand jury in the case -- to the viciousness of the civil rights era. Then Polgreen went even further, making a revolting, inflammatory comparison of that history of violence to "state voter ID laws" of today.

Yet many black Americans today lament facing struggles reminiscent of the last century. Highly militarized police forces patrol their communities. State voter ID laws, along with laws barring felons from voting, are widely seen as efforts to disenfranchise black citizens. Some scholars argue that mass incarceration and harsh policing tactics have replaced Jim Crow laws as a way to control the black population.

Then there was the eternally classless Paul Krugman, economist turned hack columnist, who has never met a national tragedy he wouldn't jump on to help Democrats politically. On Monday Krugman lumped the racist shooter in with those who oppose Obama-care expansion of Medicaid and minimum wage hikes.

Yet racial hatred is still a potent force in our society, as we’ve just been reminded to our horror. And I’m sorry to say this, but the racial divide is still a defining feature of our political economy, the reason America is unique among advanced nations in its harsh treatment of the less fortunate and its willingness to tolerate unnecessary suffering among its citizens.

Then Krugman pretended to be fair:

Of course, saying this brings angry denials from many conservatives, so let me try to be cool and careful here, and cite some of the overwhelming evidence for the continuing centrality of race in our national politics.

Krugman cited two academic papers, one of which "concluded that race is central, because in America programs that help the needy are all too often seen as programs that help Those People: 'Within the United States, race is the single most important predictor of support for welfare. America’s troubled race relations are clearly a major reason for the absence of an American welfare state.'"

Now, that paper was published in 2001, and you might wonder if things have changed since then. Unfortunately, the answer is that they haven’t, as you can see by looking at how states are implementing -- or refusing to implement -- Obamacare.

According to Krugman, there is only one possible reason to oppose Obamacare. Not the loss of coverage promised by the president, or the disastrous incompetence of the roll-out, or the promise of higher premiums to come, but...slavery!

After wondering in amazement about how many states were passing up the wonderful Obama-care deal on Medicaid:

The answer is, 22 states at this point, although some may eventually change their minds. And what do these states have in common? Mainly, a history of slaveholding: Only one former member of the Confederacy has expanded Medicaid, and while a few Northern states are also part of the movement, more than 80 percent of the population in Medicaid-refusing America lives in states that practiced slavery before the Civil War.

And it’s not just health reform: a history of slavery is a strong predictor of everything from gun control (or rather its absence), to low minimum wages and hostility to unions, to tax policy.

The massacre of nine African-Americans in a storied Charleston church last week, which thrust the issues of race relations and gun rights into the center of the 2016 presidential campaign, has now added another familiar, divisive question to the emerging contest for the Republican nomination: what to do with the Confederate battle flag that flies on the grounds of the South Carolina Capitol.

And like some of their predecessors seeking to win the state’s primary, the first in the South, the leading Republican candidates for 2016 are treading delicately. They do not want to risk offending the conservative white voters who venerate the most recognizable emblem of the Confederacy and who say it is a symbol of their heritage.

Of course, Hillary is off the hook:

Even after online pictures of the suspect in the massacre, Dylann Roof, holding the Confederate flag and a gun surfaced on Saturday, none of the candidates who appeared on Sunday’s political television programs were willing to say flatly whether it should continue to fly at the South Carolina Capitol. The most prominent Democratic contender, Hillary Rodham Clinton, said in 2007 that the flag should be removed.

The carefully calibrated answers were a vivid illustration of the difficulties Republicans face in trying to broaden their party’s appeal to minorities while also energizing white conservatives.

But while the Republican presidential hopefuls are now mostly focused on a heavily white electorate for the primaries and caucuses, an increasingly diverse country looms for the eventual nominee.

Not until three days after it was reported that a young white gunman expressing hostility toward blacks had killed nine worshipers at Charleston’s historic Emanuel African Methodist Episcopal Church, including Clementa Pinckney, a pastor and state senator, did the Republican presidential campaign fully catch up to a country reeling from the gruesome display of racial hatred.

At least this bit of bipartisanship got a mention:

The fight over the flag’s placement has a long history in South Carolina. It was originally flown atop the Capitol during the administration of Gov. Fritz Hollings, a Democrat, in 1962 as the civil rights movement gained steam, ostensibly to mark the centennial of the Civil War.