When it came to covering issues voters cared about, the networks didn’t catch ‘em all, especially the most important one.

According to the Pew Research Center, voters ranked the economy as their highest priority in July. But the media had different priorities in its coverage. It spent twice as much time reporting on Pokemon Go, a mobile game in which players caught cartoon monsters, than it did on the state of the economy.

In the month of July, ABC, CBS and NBC evening news programming spent at least six minutes more on Pokemon Go than the U.S. economy (731 seconds vs. 338 seconds). During that time, the shows failed to cover major economic indicators, including a GDP estimate which the Wall Street Journal called “disappointing,” but aired 11 stories on Pokemon Go.

Reporters played Pokemon Go on camera, appeared next to cartoon monsters while reporting and hyped Nintendo’s “soaring” stock -- embracing a game rather than major economic issues.

“Pokemon, pocket monsters jumping from the Game Boy right into the palm of your hand,” Wright said.

Wright then reported that “Pokemon Go uses the GPS data from your cell phone to let you track pokemon in the real world.” He concluded his story by tapping his phone as if he was playing the game and cheered “Pokeballs at the ready!”

Evening shows didn’t report on dismal second quarter economic growth, but they did make time to report on the growth of Nintendo’s stock thanks to Pokemon Go.

Thanks to stock in Niantic, the company that created Pokemon Go, Nintendo’s market value shot up by billions of dollars. NBC Nightly News anchor Lester Holt reported on the company’s success in a June 19 report. 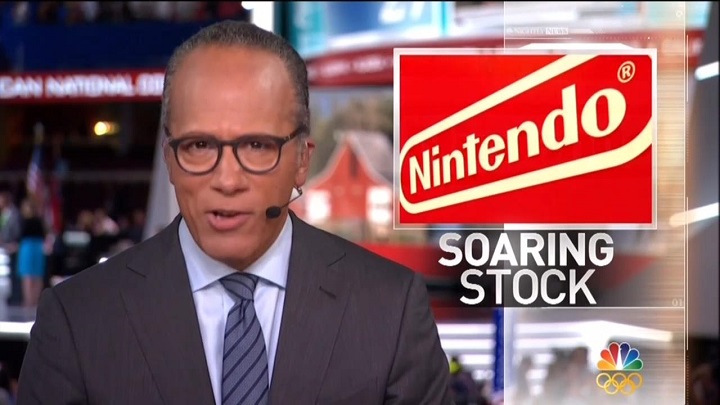 “The mobile game where players catch little monsters is a monster hit,” Holt began as a graphic that read “SOARING STOCK” appeared next to him. Holt then reported that Nintendo’s value doubled since Pokemon Go was released.

World News Tonight correspondent Gio Benitez reported on Nintendo’s stock, and appeared next to Pokemon on-screen during his July 13 report.

“Nintendo, a part owner, saw a sudden and steep rise in its stock all to catch these little guys,” World News Tonight reporter Gio Benitez said as various Pokemon monsters appeared behind him.

Hyping the games’ ability to place Pokémon in real life environments was a common theme in evening news shows. Evening News correspondent Don Dahler did that during his July 11 report, as did Nightly News reporter Jo Ling Kent on the same day. 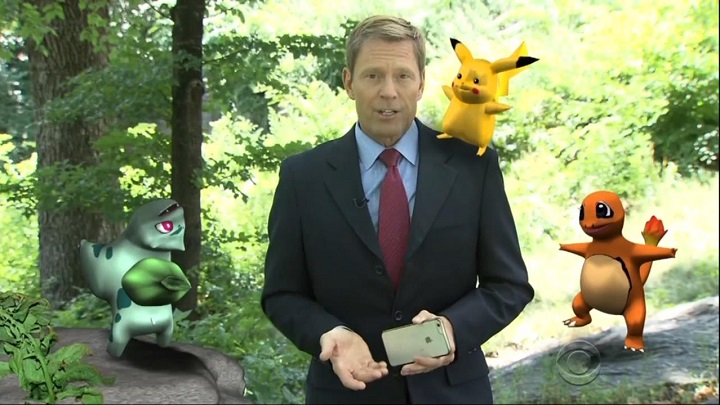 What the media failed to cover, however, were June jobs numbers and extremely slow GDP growth in the second quarter of 2016.

On July 29, The Commerce Department estimated the economy grew at a 1.2 percent rate for the second quarter of 2016. CNBC asked that day, “How slow is US economic growth? ‘Close to Zero.’”

The “close to zero” quote came from Paul Ashworth, chief U.S. economist at Capital Economics, who saw the potential for a near zero growth rate.

"What is really worrying is that pace has still been enough to reduce the unemployment rate further, suggesting that the economy's potential growth rate could conceivably be close to zero," Ashworth said.

The evening news programs should have covered an issue of primary importance to voters in an election year. At the very least, it should have devoted more time to the state of the economy than a popular pocket monster video game.

Methodology: MRC Business watched episodes of ABC, CBS and NBC evening news shows for the month of July and counted the time for stories about the state of the economy or economic issues. If a story covered politicians’ positions on economic policies, the time for that comment or mention was not counted. MRC Business counted the number of seconds the networks spent reporting on Pokemon Go as well. The July 30, 2016, episode of CBS Evening News was unavailable in video archives.