Hillary Clinton made herself look like the out-of-touch elitist she is often criticized for being, but rather than reporting that, broadcast networks hyped her “historic” nomination.

When Clinton spoke against income inequality during a April 2016 speech, she wore a jacket, reportedly costing $12,495, from high-end designer Giorgio Armani. The New York Post reported on the jacket and its price on June 5, 2016, but none of the broadcast networks -- ABC, CBS and NBC -- picked up the story.

New York Post writer Leah Bourne wrote that Clinton’s victory speech after the New York state primary “was a clear attempt to position herself as an everywoman.” “But an everywoman she is not — she gave the speech in a $12,495 Giorgio Armani tweed jacket,” Bourne commented.

Instead of covering that glaring irony, the networks hyped Clinton “making history,” as Good Morning America (GMA) put it on June 7, by becoming the first female democratic nominee. CBS This Morning called her nomination “historic.” 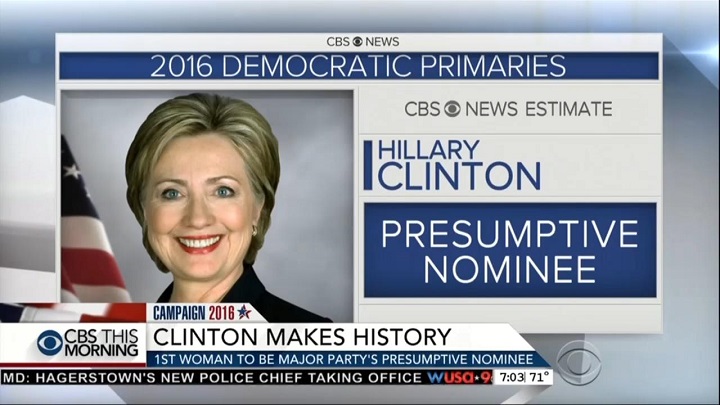 In morning and evening news shows after the Post’s report, networks reported on Clinton’s expected nomination and played clips of her commenting on it.

GMA, for example, played a clip of Clinton declaring, “We are on the brink of a historic, historic unprecedented moment.”

While the media didn’t cover Clinton’s out-of-touch choice of dress, it did report on Muhammad Ali’s death and controversy surrounding Donald Trump’s comments about the judge in his Trump University lawsuit.