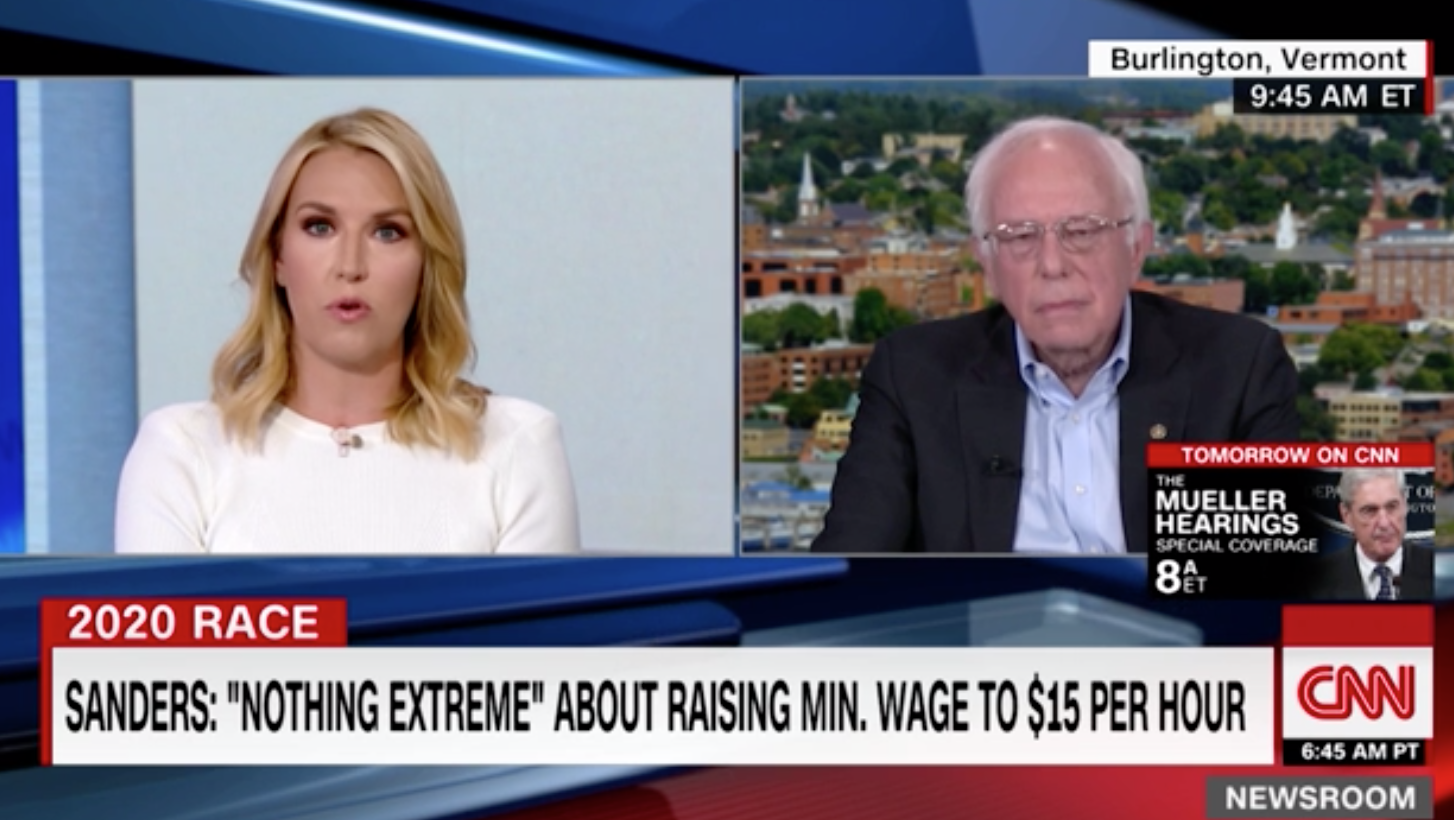 So much for the Fight for $15! Sen. Bernie Sanders, (I-VT), campaign created a PR crisis for himself after staff complaints that they were being paid “poverty wages” got leaked to the press.

That hypocrisy might have hurt him politically — if journalists had actually reported it. Although The Washington Post reported that his unionized campaign staff was upset over their pay, the networks and three national newspapers ignored the story. Staff were fighting to get the same $15-an-hour wages Sanders wants federally mandated. But all three network evening news shows as well as The New York Times, USA Today and the Los Angeles Times ignored the story between July 18 and 21, according to Nexis.

The Times credited Sanders on July 18 and 19, for pushing the idea of a $15 minimum wage “to the fore” in 2016, as it reported on the House vote on a minimum wage increase. Nowhere did those pieces acknowledge his staff’s fight for higher wages which The Post broke that day.

The Post reported that Sanders unionized campaign staff were “battling with its management, arguing that the compensation and treatment they are receiving does not meet the standards Sanders espouses in his rhetoric, according to internal communications.” Bloomberg Law added a new detail on July 23, reporting that an unnamed individual in Indiana also filed a complaint against the campaign with the National Labor Relations Board.

Sanders is a millionaire and a democratic socialist who has bullied companies over wages for years. He’s advocated a $15 federal minimum wage regardless of the consequences. In June, he attacked Walmart and its shareholders meeting for paying “starvation wages.”

Now his staff has called their own pay “poverty wages.”

A draft letter the Sanders 2020 campaign staff wrote said field organizers “cannot be expected to build the largest grassroots organizing program in American history while making poverty wages. Given our campaign’s commitment to fighting for a living wage of at least $15.00 an hour, we believe it is only fair that the campaign would carry through this commitment to its own field team.”

The Post said organizers were working at least 60 hours per week, bringing their salaries to below $13 an hour on average.

Organizers complained to campaign manager Faiz Shakir that on their $36,000 salaries they were “struggling financially,” some were getting “payday loans” to get by, and needed more money “to be able to feed myself.”

On July 19, Sanders defended himself telling The Post he was “very proud” to have been the first campaign to unionize its staff, and claiming they provide “unprecedented benefits and protections” to their workers.

The same day he told the Des Moines Register he was unhappy people were “going outside the process and going to the media,” calling it “improper.” Instead of increasing salaries, Sanders told the Register he would restrict staff hours to around 40 hours per week so that their salaries were equivalent to $15-an-hour.

In other words, Sanders had to make a choice based on finite resources: pay more (and perhaps cut staff) or reduce working hours. The same kind of choices every business has to make in order to stay in business.

Conservatives had a field day with the wage dispute news. Rep. Dan Crenshaw, (R-TX), tweeted, “Does this fall under the category of hypocrisy, irony or poetic justice? All three?” Fox host Charles Payne said on America’s Newsroom Sanders "blew a hole in his own $15 an hour minimum wage argument," adding that he is paying his staff "what the market would bear."

The same week that the Sanders’ campaign hypocrisy became known, the Democratic-controlled House of Representatives passed a bill to gradually raise the minimum wage to $15 by 2025. It was not expected to pass the Republican-controlled Senate.

After a couple days of mockery and criticism, Sanders’ campaign announced it struck a new deal with its unionized staff to increase salaries for field organizers to $42,000 and increase their workweek to six days/50 hours, according to The Post. That deal got more widespread attention than the wage dispute itself.

Even The Post was aware of the stakes, but was soft on Sanders about them writing on July 23: “The complaints by his workers threatened to undercut his argument that he is best positioned to fight for working-class Americans.”

Sanders and other left-wing advocates act like a $15 minimum wage can only help workers, not harm them. But that’s not reality.

Norm Brodsky is the owner of a chain of fast-casual restaurants in New York City. He wrote in Inc. magazine in 2016, that “If $15 per hour becomes our entry-level wage, there will be consequences. We will have to make significant changes to our operations to stay in business. Jobs will be lost.”

He explained that his restaurants “will not be viable if labor costs rise above 35 percent of revenue.”

So under a $15-an-hour mandated minimum wage, Brodsky said his options would be to “automate and outsource” and every business with minimum-wage employees would face similar choices.