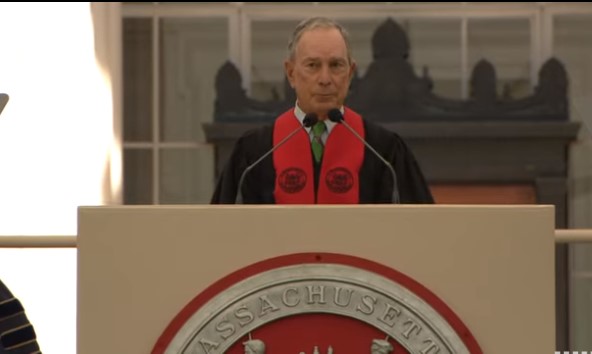 Former Mayor Michael Bloomberg reannounced a $500-million effort to eradicate coal and natural gas use in the U.S. on June 6. ABC, CBS and NBC news didn’t even flinch.

That night the three broadcast evening shows made no time for the billionaire media mogul’s massive spending to shut down the rest of the nation’s coal plants by 2030 and start targeting natural gas plants. They also haven’t reported it since, much less scrutinized it even though he’s a high-profile liberal donor, media owner and maybe former politician.

“We’re in a race against time with climate change, and yet there is virtually no hope of bold federal action on this issue for at least another two years. Mother Nature is not waiting on our political calendar, and neither can we,” Bloomberg said of his Beyond Carbon initiative.

His foundation committed an additional $500 million to “move the U.S. toward a 100 percent clean energy economy as expeditiously as possible.” He already spent $100 million on past “Beyond Coal” efforts in partnership with the liberal Sierra Club. He has also extended grants to other environmental groups including Advanced Energy Economy, Earthjustice, Environmental Defense Fund, League of Conservation Voters, and the Natural Resources Defense Council (NRDC).

He called the latest effort a “moonshot” goal and unveiled the plan at commencement for MIT’s graduating class.

Bloomberg’s own media outlet promoted the campaign in spite of that being a massive conflict of interest. In addition to Michael Bloomberg’s self-promotional piece about “our next moonshot,” Editor Mark Gongloff wrote an opinion column on June 7. It proclaimed “The Climate Crisis Is Here. It’s Time We Started Acting Like It.” Gongloff called “saving the world from catastrophic climate change” a “heroic effort,” and one that can start immediately as the former mayor plans to do.

MSNBC anchor Stephanie Ruhle practically celebrated Bloomberg’s efforts on her Velshi and Ruhle program June 7. She interviewed proponent Gene Karpinski of the League of Conservation Voters, without noting that Bloomberg Philathropies has funded the group in the past. Ruhle also defended Bloomberg’s latest campaign from a left-wing critic of philanthropy and capitalism: Anand Giridharadas.

Giridharadas said, “If he’s willing to change how capitalism works so that you’re not allowed to make money by ruining the planet, I’m all in.”

“I’m pretty sure he wants to make it smarter or better. That’s what his goal is, we’ll soon find out,” Ruhle said, defending Bloomberg. Those Beyond Carbon focused interviews took up a combined 8 minutes and 39 seconds of her show that day.

After interviewing Karpinski, Ruhle commented, “The planet is not political. We all want to breathe clean air and drink clean water” as if that’s what the Bloomberg plan was planning to accomplish.

Obviously, environmental groups are psyched for Bloomberg’s plan. Earthjustice (which has been funded by Bloomberg in the past) promoted Beyond Carbon calling it “the largest-ever coordinated campaign against climate change” in the United States. It also said Bloomberg’s efforts will “employ advocacy, legal and electoral strategies” to eradicate coal plants, oppose new gas plants and elect “climate champions.”

Other liberal groups he has funded touted the new campaign including the Natural Resources Defense Council (NRDC) and the Sierra Club.

To truly get “beyond carbon” would take more than the end of coal and natural gas since U.S. energy consumption still includes vast amounts of petroleum and the three sources combined made up 80 percent of total energy consumption in 2018, according to EIA data.

Bloomberg’s efforts were blasted by Gov. Jim Justice of West Virginia who said in a press release, “This singlehandedly destroys West Virginia — our great coal mining families, our great pipeline people, our great oil and gas people, everything.”

“His end goal is to extinguish fossil fuels,” Justice said. “And if that happens to us, we’re back in the Dark Ages.” West Virginia Sen. Joe Manchin (D), also criticized the initiative that would “punish” his state.

Climate Depot’s Marc Morano told The Washington Times, “Bloomberg has it in for blue-collar workers and affordable energy.”