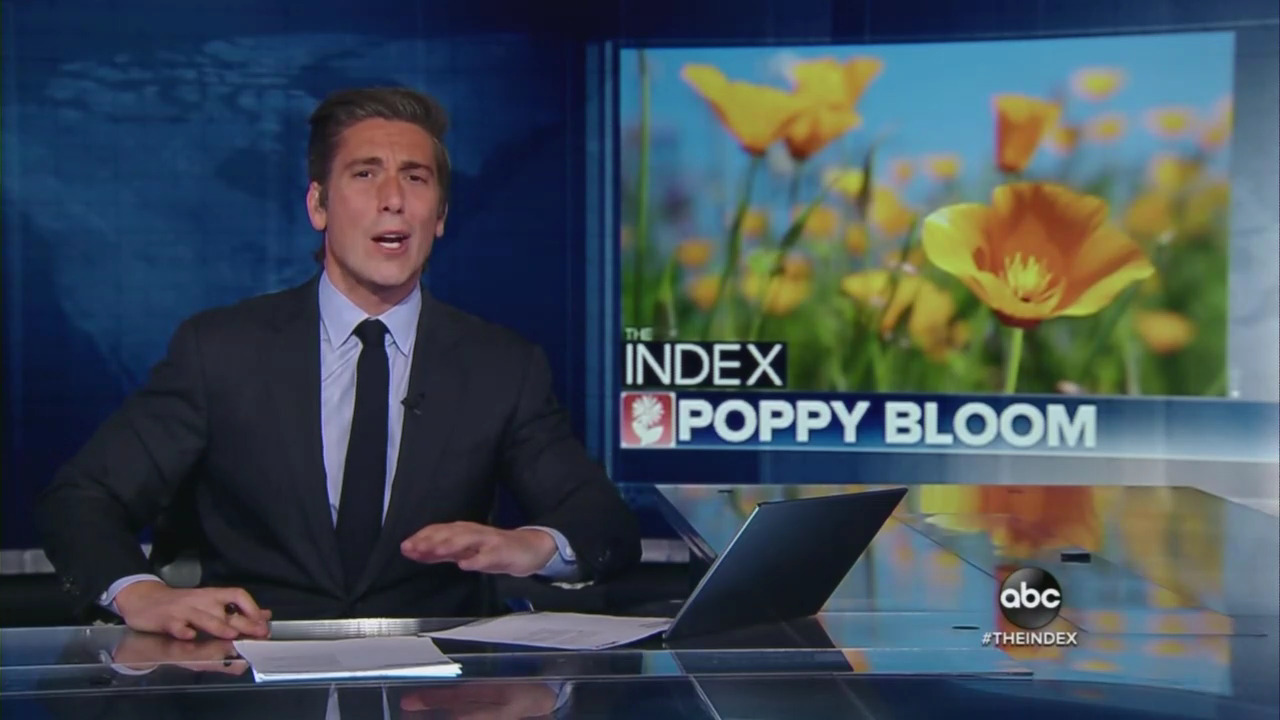 California’s “Mediterranean climate” gets attention when it can be used to leverage panic over climate change and when people’s lives and properties are at risk. But the broadcast networks have proved that when it cycles back around thanks to a wet winter, they won’t always report it.

If a wildflower superbloom hadn’t sprouted in California and drawn thousands of visitors, it’s doubtful any of the three evening news shows would have actually announced California was finally out of its long drought. None of the three did a standalone drought story, and ABC failed to report the end of the drought in spite of covering the wildflower bloom.

USA Today reported on March 15, that the entire, enormous state of California is now officially out of drought for the first time since 2011. That was the word from the U.S. Drought Monitor on March 14. But on the six nights after the Drought Monitor announced that good news for California, ABC's World News Tonight skipped the drought altogether — even when it covered the “superbloom mania” on March 18.

CBS Evening News took until March 19, to mention the state was drought-free, saying in its tease: “The drought is over and the desert comes alive.”

CBS correspondent Jamie Yuccas opened the story saying, “Seven years, California is drought-free and the earth is celebrating,” before going on to report record crowds and Instagrammers getting too close to the flowers for their pictures.

NBC Nightly News was the earliest evening newscast to announce the end of the drought.

Sunday anchor Kate Snow said, “A sign of spring now with truly stunning pictures from southern California. It’s called the superbloom, following weeks of rain, California has finally emerged from its drought and wildflowers have begun to blossom. These poppies are drawing crowds of thousands of people.”

The end of the drought is good news for California, at least for now.

“If we have a few more years of this, then maybe our groundwater conditions will be in much better shape and we might be in a better shape to deal with another potential drought, which will come, Stanford University’s director of urban water policy Newsha Ajami told USA Today. “California has a Mediterranean climate so we do experience a lot of ups and downs in our weather conditions.”

In 2017, when winter storms also helped California pull out of the most severe drought category — “exceptional drought” — the broadcast networks barely acknowledged the change. Only NBC’s Today mentioned it between Jan. 24, and Jan. 31, of that year.

The liberal media claimed for many years that droughts like the recent, protracted drought in California was due to man-made climate change. They also portrayed it as unusual, labeling it “historic” in more than 60 percent of their California drought stories in early 2014. But according to some experts, they were wrong about claiming it was “historic” and unprecedented that year.

NOAA scientist Martin Hoerling disputed the assessment in a 2014 New York Times op-ed, saying California’s drought “resembles the droughts that afflicted the state in 1976 and 1977. Those years were at least as dry as the last two years have been.”

Although he accepted that global warming occurred, he argued in that op-ed that “scientific evidence does not support an argument that the drought there is appreciably linked to human-induced climate change.”

ABC, CBS and NBC also connected “hundred-year forest fires” and “periods of severe drought” to climate change in many morning and evening shows in the spring of 2014, without questioning that supposed link. Some other media even claimed it would go on getting worse for a very, long time. Wired magazine warned in May 2016, “California’s Drought is Probably Forever.”