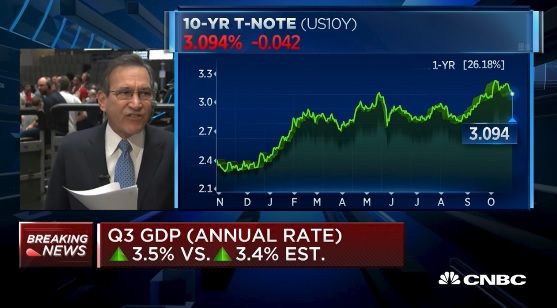 The economy “charged ahead in the third quarter,” according to The New York Times.

But the good news didn’t make it into the broadcast evening news coverage on Oct. 26, even though it was one of the final big economic announcements before the 2018 midterm elections.

The Bureau of Economic Analysis announced that day that the economy grew by 3.5 percent. Although lower than the prior quarter of 4.2 percent growth, it was higher than expected according to CNBC.

The reviews of the results were quite positive. The Times reported that 3.5 percent was “keeping it on track for the best annual performance since 2005.”

Marketwatch described it as a “solid clip” and also reported that “The economy looks like it will expand above a 3% rate in 2018. That hasn’t happened since 2005.”

President Donald Trump set a goal of 3 percent annual GDP growth, but the economy didn’t quite get there in 2017.

All too often, the networks have ignored economic growth reports like this. Although all three noticed the initial estimate of 4.1 second quarter growth, Evening News was downbeat in July saying it was “not expected to continue at this pace.” CBS consulted an economist who called it “a bit of a mirage.” When the growth rate was revised up to 4.2 percent in August, the broadcast shows ignored the update.