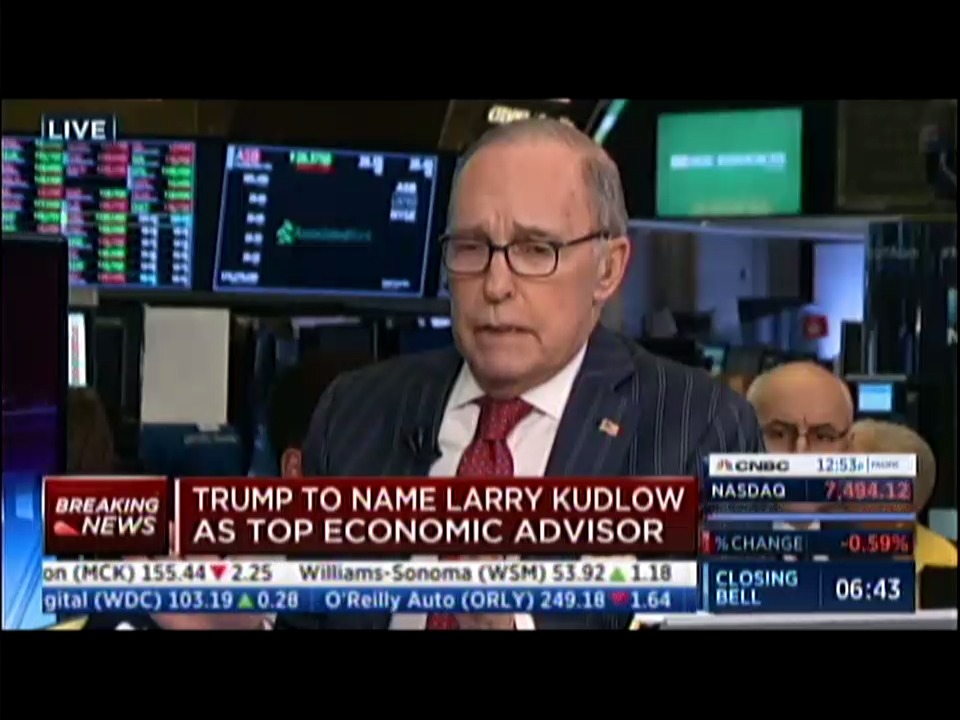 Many liberal media outlets raced to attack the vocal free trade proponent who was the latest prominent person to join the Trump administration. Kudlow had previously served as an informal adviser to the campaign. They attacked him over his support for tax cuts and supply-side economics, as well as failed forecasts.

Condescension, jeers, and insults were common in news and op-eds about the new director of the National Economic Council. Fair reports or interviews with Kudlow supporters were rare exceptions.

Washington Post columnist Dana Milbank derided Kudlow as a man who “may have been more wrong about the economy than anyone alive.” Similar insults and complaints about forecasting fails were hurled by New York Magazine, Vanity Fair and The New York Times. CNN host Brian Stelter sneered that it was “one of the best examples yet of that Trump TV feedback loop.” CNN’s political director called Kudlow a “cable TV personality,” but CNN’s Wolf Blitzer attempted to rein in the statement by saying Kudlow is an economist.

“In any other White House, the news that Kudlow was a frontrunner to become the president’s top economic adviser would be cause for despair,” so Weissman’s condescending logic went. “A highly paid mouther of ‘80s-vintage supply-side platitudes, the man has spent decades yapping in favor of Wall Street-friendly tax cuts and deregulation while blowing calls about the direction of the economy. He’s the human embodiment of an overpriced power tie — a loud throwback that bankers really like.”

But since it’s the Trump administration, Weissman decided “given the alternatives, I’m rooting for Kudlow to get the job.”

After labeling him “perpetually wrong” in its headline, Vanity Fair proclaimed on March 14, that the “ongoing joke that is the Trump administration” “outdid themselves, hiring a Reaganite TV economist who blew the financial crisis — along with virtually every other call he ever made — as the president’s top economic adviser.”

It’s easy for journalists to point fingers now (years later). But according to Wharton Business School at the University of Pennsylvania, many Wall Street bankers, banking regulators, the Federal Reserve, politicians, journalists AND economists failed to see the financial crisis “brewing.” The article “Why Economists Failed to Predict the Financial Crisis,” noted that many missed it and even economists who spotted the housing bubble still “failed to fully understand the implications.”

On March 15, MSNBC co-anchor Stephanie Ruhle remarked with a grimace that it was “interesting,” Kudlow brought up “God’s will” in his CNBC announcement that he’d accepted the position.

Kudlow is a Catholic who credits his conversion with getting “clean and sober.” He tweeted at her, “Sneering at faith, and God’s will, @SRuhle @MSNBC. Why still on air? She apparently believes people in business & economics should not have faith.”

Ruhle later tweeted an apology saying, “As a reporter, a mom & a Catholic, I know words matter & I want to clear something up. I meant no offense when discussing @larry_kudlow’s WH appointment. I apologize if my comments came off as dismissive of his faith. I would never question another person’s believe in God”

Kudlow publicly thanked her and accepted the apology and tweeted, “Let’s move on.”

One of the criticisms — aside from having made failed predictions (like missing the financial crisis/housing bubble) — was that Kudlow supports tax cuts. This is no surprise, he is a pro-growth, supply-sider and former Reagan official. But to the left that is bad policy.

Liberals hate tax cuts which is why the media reporting ahead of the Trump tax cuts was overwhelmingly against them, and good news related to them was so often ignored since their passage.

Slate proved that tax cuts are part of the left’s beef with Kudlow writing, “He has occupied himself for the better part of a media career calling for regressive tax cuts of the sort that Trump and the Republican Party just enacted. He is no great economic light.”

Business Insider wrote that Kudlow represented “Reagan administration replays” who “champion eternal tax cuts” and have “been deaf to decades of evidence that their trickle-down policy Gospel doesn’t work.” The headline to that BI news story was “Larry Kudlow is the perfect person to keep Trump’s economic sham going.”

Bloomberg complained for much the same reason, claiming Kudlow’s pick means the “GOP has little to offer beyond tax cuts for high earners” and argued that “fundamentally” the GOP “brain trust’s bench is getting thin.” The new site owned by liberal Michael Bloomberg provided the typical left-wing arguing that tax cutting doctrine get “poor marks from economists.”

Perhaps this says more about which economists the media turn to?

The refrain from the left that tax cuts don’t spur economic growth is ideological and monotonous. But it’s one the liberal media continue to embrace.