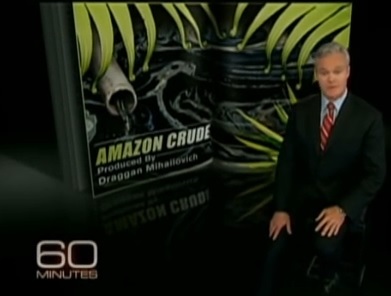 refused a lawyer’s appeal trying to force Chevron to pay almost $9 billion for pollution in Ecuador. Earlier courts ruled the decision against Chevron was obtained through corrupt actions.

Reuters reported on June 19, that the court’s decision not to take the case leaves earlier district and appellate court victories standing for the nation’s second largest oil company. Chevron’s court victories were previously ignored by the liberal news media years after CBS promoted the attack.

"Today's decision is an important step toward bringing this illegal scheme to a final conclusion," said R. Hewitt Pate, Chevron's vice president and general counsel, according to Reuters.

Bloomberg.com’s headline was slanted against the company declaring, “Chevron Shielded from $9 Billion Verdict.” But at least the story admitted anti-Chevron attorney Steven Donziger “was found to have committed fraud.”

The three broadcast network evening shows failed to report Chevron legal victories in 2014 and 2016. It was particularly egregious of CBS to ignore the story since 60 Minutes famously boosted the case against Chevron with a biased report from now-anchor Scott Pelley.

Pelley’s report from 2009 made New York-based attorney Steven Donziger look like a hero helping Ecuadorean tribes fight the big, bad oil company. His story included six anti-Chevron voices versus just one company spokesperson. In spite of winning an Edward R. Murrow award for the hit job, it was so obviously biased Columbia Journalism Review’s blog “The Audit” criticized its failure to check facts and described the piece as “an exercise in innuendo.”

Pelley also left out huge problems of corruption in Ecuadorean courts and used misleading video evidence including a well polluted by fecal matter, not oil.

In 1998, the government of Ecuador certified that Texpet, an oil company partnering with PetroEcuador, had met the country’s and international standards for pollution remediation releasing the company from future claims and obligations.

Donziger originally sued Texaco over pollution in 1993, but Chevron acquired the company in 2001. In 2011, Donziger finally won a judgement in Ecuador against Chevron.

The oil company countersued in a civil racketeering lawsuit arguing Donziger won by “repeated acts of fraud, bribery, money laundering” and other means. In 2014, U.S. District Court judge ruled in Chevron’s favor saying that Donziger’s legal victory had been “obtained by corrupt means.” That court decision also blocked U.S. courts from being used to collect billions from the company.

Back then, The Wall Street Journal review and comment section noted that the judge called the case “extraordinary” and called Donziger’s team’s actions “offensive to the laws of any nation that aspires to the rule of law, including Ecuador.”

In 2016, a federal appeals court also upheld the 2014 ruling which prevented U.S. enforcement of the $8.65 billion claim against the company.

Even after the court decisions against Donziger, some liberal media outlets continued promoting his attacks on Chevron.