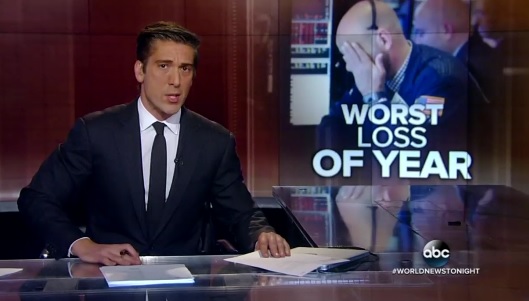 The Dow Jones Industrial Average dropped sharply on May 17. The broadcasts networks all reported it that night, attributing the drop to accusations of potential wrongdoing by the President.

ABC World News Tonight with David Muir blamed “turmoil” in Washington over the fact that a special counsel had been appointed that day for the Russia investigation. Former FBI director Robert Mueller was selected to lead that probe.

The networks quickly connected Trump to the market dive, although when the stock market was rallying the networks minimized the new record highs and often omitted any connection to Trump.

On May 17, 2017, all three broadcast evening news shows reported the Dow Jones Industrial Average drop. NBC Nightly News reacted with the question “Is the Trump bump over?”

World News said onscreen that the drop of 372.82 points for the Dow Jones Industrial Average was the “worst loss of year.”

All three networks connected the selloff to the Trump administration and how it would be impacted by the Mueller appointment and the Russia investigation. The argument was that the market dropped due to concerns the controversies would prevent pro-economic growth policies from being implemented.

Many CEOs and experts credited the Trump administration’s plans for tax reform and pro-growth policies for the post-Election Day record setting rally. The Dow set 16 new closing day record high between the election and Dec. 13, 2016. Yet, the evening shows mentioned the market records in only 11 stories — fewer stories than records! Forty-five percent of the reports also ignored Trump, even as other liberal media outlets including The New York Times credited Trump’s pro-business posture.

In 2017, there were more records including a 12-session streak of record highs. That incredible “historic run” was covered in only seven network evening news reports between Feb. 9, and March 2. On Feb. 27, that streak tied a 1987 milestone for “longest record-setting streak,” according to Marketwatch. And that night, World News, Evening News and Nightly News said nothing about it.

Clearly, the networks would rather report on stock market declines if they can attach them to the administration.