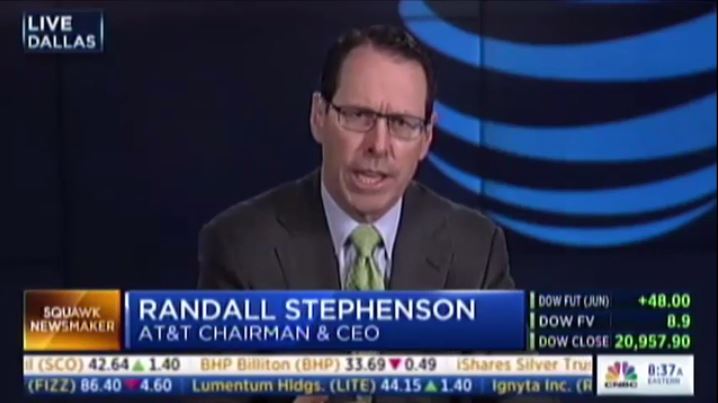 The CEO of AT&T insisted that tax reform spurs business investment, which will lead to hiring and wage growth in an interview with CNBC’s Squawk Box a week after the president proposed reforms.

AT&T CEO and chairman Randall Stephenson sat down with the Squawk Box crew on May 4, to discuss several issues including the possibility and impact of a tax reform plan on the U.S. economy. Although specifics regarding President Donald Trump’s tax reform proposal was not mentioned, it seemed to underpin the conversation.

Stephenson is one of many CEOs who are part of the Business Roundtable, which released its most recent CEO survey the same day.

Co-anchor Joe Kernen led the conversation and asked Stephenson to begin with a “macro” look at the issue of tax policy.

Stephenson agreed, telling Kernen he was “spot on.”

“Look, it all ties together. We just reported GDP growth in the first quarter of 0.7 percent. Simultaneous we’re investing — corporate America is investing, as a percentage of the economy, at the lowest level since — you can go back to World War II. So those go hand in hand,” the CEO said.

“I know exactly what AT&T would do [if taxes went down from 35 percent],” Stephenson told CNBC. “We would invest more. We invest more in the U.S. than any other company and we would invest more. And Joe, to your point, the arithmetic for us is simple. Every billion dollars of additional investment we make is 7,000 additional jobs we have to put on to put that capital into the ground or on cell towers and so forth.”

He also make it clear that investment leads to hiring, which leads to productivity growth and higher wages. When co-anchor Andrew Ross Sorkin pushed back on the idea that all kinds of businesses would respond to lower tax rates the same way, Stephenson was adamant.

“We all have a lot of friends who are small business owners. They have not been investing as replacement levels. There is pent up demand for investment. They want to buy a new forklift or they need to buy a new truck for their, for their small business. You drop the tax rates down as we’re talking about here, there will be a step up in investment,” he said. 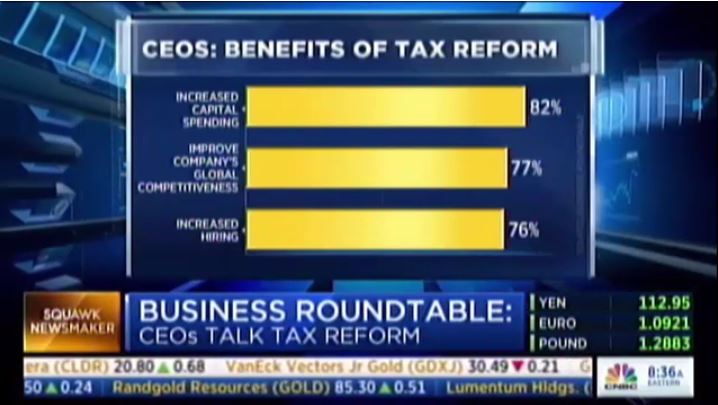 The implication was that without tax reform, companies will continue sitting out of investment and hiring. That was the same thing Business Roundtable found in its latest CEO survey.

The survey found 90 percent of CEOs thought “delaying tax reform” would harm the economy through slower economic growth, hiring and less investment. More than half (57 percent) of CEOs who responded said their company specifically would invest less and delay hiring if tax reform was delayed.

In a statement about the survey, Business Roundtable President Joshua Bolten called the Trump administration’s recent tax proposal “a significant step forward” for pro-growth legislation. Bolten was also a CNBC guest on May 4, discussing the survey and potential impact of tax reform policy.