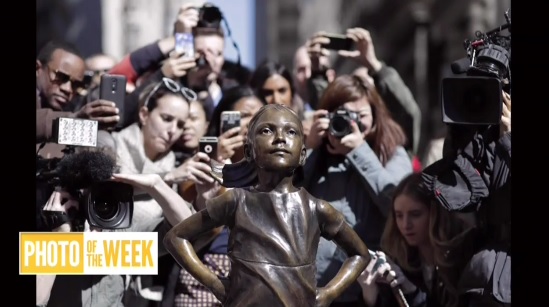 The media were thrilled when a statue of a defiant little girl was placed opposite Arturo Di Modica’s famous “Charging Bull” on Wall Street. To the networks, it became a “symbol,” a “sensation” and female empowerment.

The networks didn’t seem to mind that “Fearless Girl” was really a clever corporate advertisement for “SHE” — an exchange traded fund offered by State Street Global Advisors.

Fortune reported that until April 2, a plaque at the girl’s feet read “Know the power of women in leadership. SHE makes a difference.” The petite statue became a social media and tourist sensation, in spite of being a work of art paid for by State Street Global Advisors to coincide with International Women’s Day. It was part of its campaign for more women to be on corporate boards, ADWeek reported.

The debut was around the same time the networks were promoting the Day Without a Woman protests against Donald Trump. CBS anchor Scott Pelley called her a “pint-sized toreador” before correspondent Alex Wagner claimed the statue was a “tribute to the resilience of women” and “part of a movement that’s grown since President Trump’s inauguration.”

Since the installation, CBS mentioned the statue in six morning or evening news stories, NBC in just three and ABC one, according to Nexis searches. CBS This Morning anchors gushed over the statue, talking about how much they loved it and siding with liberal Mayor Bill de Blasio when “Charging Bull’s” creator complained and argued for relocating the new statue. 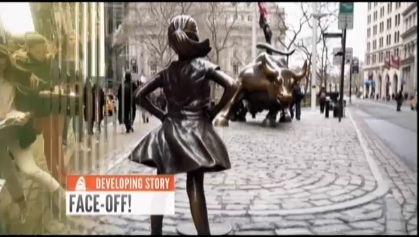 When the statue got an extension to remain in that space until 2018, CBS This Morning co-host Gayle King was thrilled.

On March 8, Wagner set the scene of female empowerment telling Evening News viewers, “A young girl, head held high, hands firmly planted on her waist, stares down an icon of Wall Street, an arena long dominated by men. She is called ‘Fearless Girl’ and she is taking a stand for women’s equality by facing off with the ‘Charging Bull.’ People young and old are flocking to her.”

That perception and way of interpreting the new statue along with the existing sculpture is precisely what upset Arturo Di Modica, the creator of “Charging Bull.”

Di Modica was upset, not by the existence of “Fearless Girl,” but by the way it has appropriated and redefined his work of art. “Charging Bull” was created and installed after the 1987 stock market crash as a symbol of American resilience and power, not only of Wall Street.

But, the Post noted “Contrasted with the soft, altruistic characteristics of the bronze girl, though, ‘Charging Bull’ now appears menacing and aggressive.”

Di Modica is considering a lawsuit to try to get “Fearless Girl” moved elsewhere. His attorney Norman Siegel wrote, “The statue of the young girl becomes the ‘Fearless Girl’ only because of the Charging Bull: the work is incomplete without Mr. Di Modica's Charging Bull, and as such it constitutes a derivative work.”

His legal chances are being debated and Fortune writer Jeff John Roberts claimed it isn’t a good case. But the CBS reaction to Di Modica’s concerns wasn’t been favorable.

Mayor Bill De Blasio completely distorted the artists’ complaint on Twitter: “Men who don’t like women taking up space are exactly why we need the Fearless Girl” and “We wouldn’t move the Charging Bull statue if it offended someone. The Fearless Girl is staying put.”

Those tweets got “snaps” and calls to “drop the mic!” from This Morning co-hosts Alex Wagner and Norah O’Donnell on April 13.

On March 18, This Morning downplayed Di Modica’s downplayed argument as Charlie Rose and Gayle King insisted there was a place for “both” sculptures. Norah O’Donnell chimed in saying, “We can all agree that we need more girls on Wall Street.”

In contrast to CBS news personalities who were obviously on the side of “Fearless Girl,” NBC’s coverage of the controversy was generally balanced. Today anchor Matt Lauer said “Fearless Girl” “absolutely changes the meaning of his statue, because she looks like she’s standing up to something menacing.” Still he and others on Today didn’t think Di Modica had a legal case to challenge the new sculpture.

ABC never reported the controversy and had only mentioned the “spunky” statue of the girl on March 8, as a lead in to its brief about women’s protests on World News.

Methodology: MRC Business searched Nexis transcripts of ABC, CBS and NBC morning and evening news shows for reports containing the names of each sculpture as well as statue and girl to find all the coverage between March 7 and April 17.