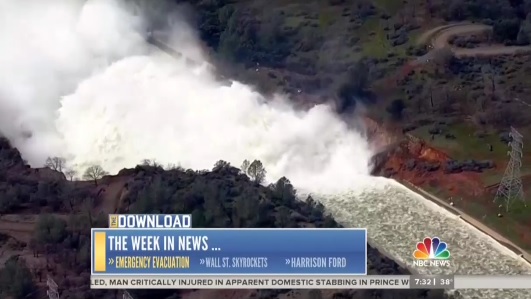 Authorities ordered the temporary evacuation of almost 200,000 people living near the Oroville Dam in California after spillway damage and erosion caused fear of death and devastation.

However, as The Mercury News reported Feb. 12, this spillway erosion might never have happened if federal and state officials heeded 2005 warnings and reinforced the emergency spillway with concrete.

ABC, CBS and NBC morning and evening shows have mentioned those 2005 warnings in less than one-third (7 out of 22) of their stories and news briefs about the Oroville Dam flooding and spillway failures between Feb. 13, and Feb. 18.

Most network reports failed to mention the 12 year old appeal to authorities to reinforce the emergency spillway to avoid dangerous erosion.

NBC’s Today delivered a recap about Oroville on Feb. 18. Anchor Craig Melvin called it an “anxious week” for area residents and correspondent Miguel Almaguer reminded viewers that the situation was “so serious” about 190,000 people had to evacuate. But that report did not mention the failure of government or the environmentalists’ warnings at all.

The night before, NBC Nightly News reported that storms were still battering California and could douse the “already-waterlogged” state, causing the Oroville Dam authorities to continue operating “under an emergency situation.”

Like both of those stories, a CBS This Morning report by senior correspondent Anthony Mason warned of additional storms moving through Northern California which would test “recently repaired spillways at the nation’s tallest dam.” Mason told viewers why residents were evacuated, but not about the calls for concrete reinforcement which had been rejected by the Federal Energy Regulatory Commission (FERC) — the government agency which licenses dams.

In the few stories which mentioned the warnings, there was little to no outrage. NBC’s Matt Lauer merely stated on Feb. 14, that environmentalists’ request to have the spillway reinforced was rejected by the government. CBS correspondent John Blackstone reported on Feb. 13, that “The crisis should come with little surprise to California officials” given the 2005 appeal to reinforce the spillway.

It is difficult to imagine that if a private company ignored such serious warnings and came so close to a deadly failure the networks would have mentioned it so infrequently. 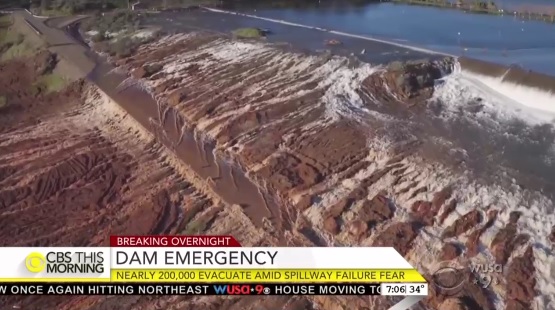 While winter storms are helping bring California out of its drought, all that rain filled the Oroville Reservoir to capacity and damaged the concrete-lined main spillway of the Oroville Dam in early February. A “gash” in the main spillway forced the first ever use of the dam’s emergency spillway, which in less than a day also appeared in danger of failure — or even collapse.

That potential spillway collapse forced the state Department of Water Resources to order the evacuation of nearby residents on Feb. 12, The Washington Post reported. CNBC said the order was lifted Feb. 14.

The emergency spillway was essentially a hillside and had not been reinforced with concrete even though environmental groups filed a motion to make that happen many years earlier.

Those groups expressed concerns that in the case of extreme rain and flooding, use of the emergency spillway could cause heavy erosion and “loss of crest control” which would threaten lives downstream. That newspaper also found that FERC rejected the motion after California’s Department of Water Resources and various county and state water agencies said the upgrades were unnecessary.

The Mercury News also found a May 26, 2006, filing from the attorneys representing the association of State Water Contractors and Metropolitan Water District of Southern California which urged FERC to reject the expensive request.

“The emergency spillway was designed to safely convey the Probably Maximum Flood, and DWR has reviewed and confirmed the efficacy of the PMF hydrologic analysis for Oroville Reservoir,” that filing said.

However, according to The Mercury News, the flows which caused severe erosion and threatened the emergency spillway were 6,000 to 12,000 cubic feet per second — or “less than 5 percent of the rate that FERC said was safe.”

On Feb. 13, 2017, FERC ordered California to put together an independent review board to examine the Oroville Dam and spillway failures to perform a “forensic analysis” of the cause and recommendations for the dam’s safety, according to the Bay Area News Group.

Methodology: MRC Business used Nexis to find all ABC, CBS and NBC news reports between Feb. 13 and 18, which included the word “Oroville” and then analyzed them. Headline reports and weather forecasts were not included in the tally, although news reports about the impact of storms in California were included.