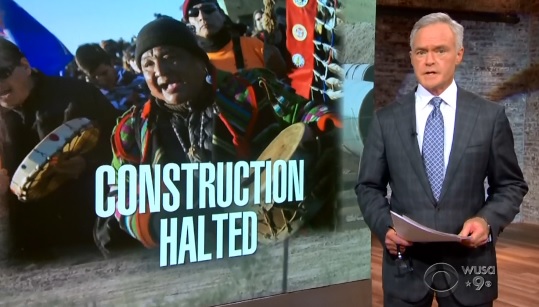 If you scream loud and long enough for a liberal cause, the media listen. Pipeline opponents dominated network reporting of the Obama administration’s decision to refuse permission for a section of the Dakota Access Pipeline (DAPL).

#NoDAPL Protesters cheered the Army Corps of Engineers’ Dec. 4, announcement that it would not grant an easement allowing construction of the pipeline across Lake Oahe and the Missouri River, near the Standing Rock Sioux Reservation. None of the reports pointed out that the Corps. granted permission for the crossing in July 2016.

ABC, CBS and NBC morning and evening news reports were heavily skewed in favor of the liberal protesters on Dec. 4 and 5. B-roll footage showed jubilation among the occupiers in Cannon Ball, N.D. who embraced, cried and sang following the decision. Combined, the networks cited eight of them including an instagram video reaction from actor and activist Mark Ruffalo. No videos or interviews were included criticizing the administration or advocating for the pipeline.

That 8-to-0 ratio was even more biased than earlier reports which quoted pipeline opposition 7 times more often than DAPL proponents.

The only criticism for the Army Corps of Engineers’ decision came in snippets of a statement from Energy Transfer Partners (ETP) — the company building the pipeline — and a vague reference to a “GOP lawmaker” who will be happy to see Donald Trump change the decision. Reporters acknowledged Trump had spoken in favor of the pipeline, but his remarks weren’t shown. None of the networks mentioned ETP’s claim that the Obama administration decision “abandoned the rule of law in favor of currying favor with a narrow and extreme political constituency.”

That use of labeling revealed the double standard that when a company verbally disagrees with a government decision they are defiant, but when thousands of people occupy land that is not theirs for months in order to block a government approved project somehow that’s heroic. The protesters were far more defiant, actually refusing to comply with the orders of local and state authorities in North Dakota.

CBS Weekend News and NBC Nightly News both presented misinformation about the pipeline fight. NBC’s Lester Holt indicated that the pipeline was being built across reservation land. The route is near, but not on that Sioux reservation.

The networks also continued promoting the NoDAPL movement by refusing to connect “violent clashes” to some of the protesters who were more like rioters at times destroying property, committing vandalism and arson and throwing rocks and Molotov cocktails at police. One ABC and one NBC report mentioned there had been past violence, but refused to say which side was violent.

In late October and early November, the networks downplayed protesters’ violence by avoiding criminal language like trespassing, vandalism and arson. A report even described the act of vehicles being set on fire by protesters as a “bonfire.” Networks also turned to activists and protesters who claimed the police should be charged with “human rights violations” for using pepper spray, rubber bullets and “weapons” to try to clear protesters from private property.

No proponents of the pipeline were interviewed on Dec. 4 and 5, following the Obama administration’s decision. Only pieces of the ETP statement were read by some reporters. ETP’s response called the move “purely political” and said it still expects the project will be completed without rerouting.

The company defended its own actions saying, “For more than three years now, Dakota Access Pipeline has done nothing but play by the rules. The Army Corps of Engineers agrees, and has said so publicly and in federal court filings. The Corps’ review process and its decisions have been ratified by two federal courts. The Army Corps confirmed this again today when it stated its ‘policy decision’ does ‘not alter the Army’s position that the Corps’ prior reviews and actions have comported with legal requirements.’”

The networks didn’t include any other critics of the administration’s decision such as the Institute for Energy Research (IER).

IER President Thomas Pyle released a statement criticizing the “strong-arm” move by the Obama administration. Pyle called it a “violation of the rule of law that will chill investment in safe energy infrastructure.”

“Much worse, it will unnecessarily escalate the tense situation on the ground between law enforcement and the protestors,” Pyle added.

The reason that courts ruled against the Standing Rock Sioux Tribe’s complaints about the pipeline route because the U.S. Army Corps of Engineers reached out to the tribe many times over two years without response.

MRC Business watched ABC, CBS and NBC morning and evening news coverage after the Dec. 4, (afternoon) decision of the Army Corps of Engineers through the evening of Dec. 5. Voices were only counted on either side of the controversy if they were shown on video. Statements including a Bernie Sanders #NoDAPL tweet which was read on air was not counted. Neither was Energy Transfer Partners’s statement, which was read in part by some network reporters.