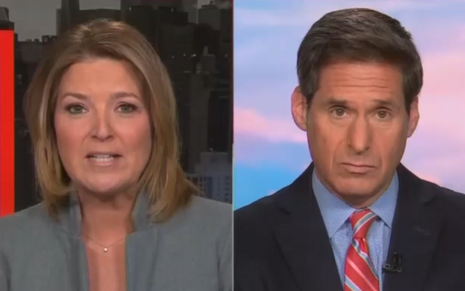 The Bureau of Labor Statistics released an awful jobs report showing that the economy only added a “dismal” 199,000 jobs against a 422,000 projection by economists. That’s a miss of 223,000. The labor force participation rate remained stagnant from November at a low 61.9 percent. CNN scrambled to spin the news in it’s write-up headlined, “Jobs disappoint in December, but unemployment falls to 3.9%.” After conceding that the “fewest jobs added in any month of 2021” was a “major disappointment,” CNN put asinine spin on the news: “Even so, 2021 will go down in history as a year of record-breaking jobs growth: America added 6.4 million jobs last year, the most since records started in 1939. Every single month brought jobs gains.” Ironically, CNN included a graph in its article that undercut its entire argument. [Emphasis added.]

Another dismal jobs report with just 199k jobs added in December - less than half the 422k forecast.

The graph tracked the trend of the recovery of the jobs market following the February 2020 freefall. However, the caption for the graphic read, “The United States lost a total of 22 million jobs in March and April of 2020. By December 2021, the number of jobs were 3.6 million shy of February 2020 levels.” CNN is saying the quiet part out loud. No, the jobs market is not experiencing “growth” because it hasn’t even fully recovered the jobs it lost in 2020. In fact, Biden’s disastrous economic policies may be why the jobs market still hasn’t been able to fully recover. 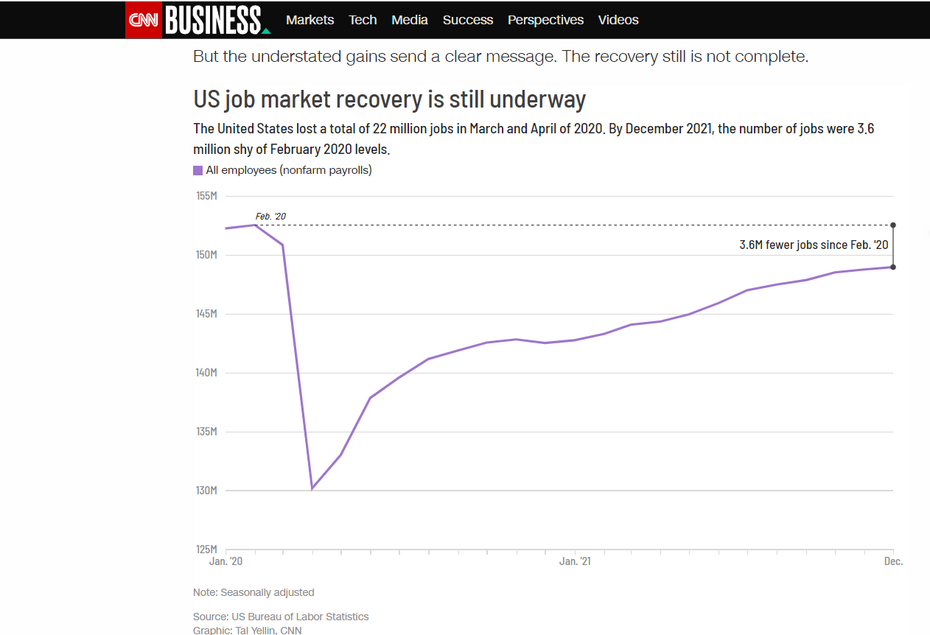 Fox Business reported in February 2021 that “‘The US economy will bounce back to its pre-pandemic size by the middle of the year without any emergency stimulus, the US Congressional Budget Office [CBO] projected Monday [February 1].”  The CBO report specifically stated that if “current laws governing federal taxes and spending (as of January 12) generally remain in place and that no significant additional emergency funding or aid is provided,” the economy will continue to strengthen "during the next five years." Even more revealing was the report’s projection that many people will “rejoin the civilian labor force who had left it during the pandemic, restoring it to its pre-pandemic size in 2022,” if no significant additional "emergency funding" or aid was added. CNN’s graphic shows that 3.6 million people who lost their jobs after February 2020 have still not yet returned as of December 2021. How is this “record-breaking growth?”

CNN tried to gild this week’s poor labor numbers by injecting a pro-establishment quote bellowing from the pith of corporate America: “In a sense, even the labor shortage that is hamstringing businesses is a relatively good problem to have,” CNN paraphrased [Wells Fargo senior economist Sarah House] as saying. "'That's the opposite of what we saw two years out of the Great Recession,'" House said.

Conservatives are under attack. Contact CNN at (404) 827-1500 and demand the outlet stop trying to spin the anemic jobs market to benefit Biden.