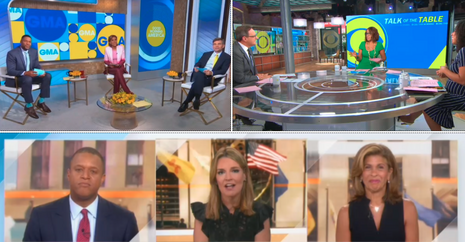 The Bureau of Labor Statistics (BLS) reported at 8:30 a.m. July 13 that the “Consumer Price Index for All Urban Consumers (CPI-U) increased 0.9 percent in June on a seasonally adjusted basis after rising 0.6 percent in May.” The dangerous spike was the “the largest 1-month change since June 2008 when the index rose 1.0 percent.”

The statistic destroyed the median 0.5 percent increase forecast by a Bloomberg News survey of economists. If the inflation news wasn’t bad enough, “Over the last 12 months, the all items index increased 5.4 percent before seasonal adjustment,” the BLS said.

It continued: “[T]his was the largest 12-month increase since a 5.4-percent increase for the period ending August 2008.” In addition, core CPI, which excludes food and energy, “rose 4.5%, the sharpest move for that measure since September 1991 and well above the estimate of 3.8%,” CNBC reported.

Guess what? ABC Good Morning America (GMA), CBS This Morning, NBC Today and NBC 3rd Hour of Today gave the BLS report zero coverage during their July 13 broadcasts. The networks have now spiked bad news on the monthly CPI data to protect President Joe Biden’s economic image for the second time in a row. Tressis Gestión Chief Economist Daniel Lacalle Fernández tweeted the important note that June was the “first month” without the “base effect,” a data distortion that the liberal media have used to downplay inflation fears in recent months. He also mocked earlier assertions that the spiking inflation would only be “transitory.”

United States. Big rise in inflation in the first month without "base effect".

Almost all items rising fast, with shelter, energy, used vehicles, and utilities as most concerning.

GMA did find the time to run a 140-second segment teaching viewers how to build their “summer sandwiches.” A sandwich appeared to be more important than informing readers about the inflation data for the network.

Over at CBS This Morning, the network spent 99 seconds on a segment promoting a Barbie doll modeled after tennis star Naomi Osaka. Perhaps if the CPI data were represented as a feminist Barbie doll, the network would have expressed more interest.

NBC's Today was no better. The network ran a whopping 347-second segment on the “big bargains” in fashion. None of that ridiculously long airtime was spent covering the inflation news.

NBC's 3rd Hour of Today had a chance to clean up its preceding program’s journalistic malfeasance on the inflation news, but chose to spike it as well. The network instead spent 53 seconds talking about “National Fry Day.”