We’ve reached the point in America where leftist network MSNBC actually tried to hoodwink people into believing that the huge price spikes caused by inflation are a good thing.

MSNBC had the audacity to tweet out a nutty op-ed celebrating COVID-19 and downplaying the threat of inflation with the caption: “Why the inflation we’re seeing now is a good thing.” Yikes. The op-ed, headlined, “How Covid became the unlikely hero of our inflation crisis,” was written by MSNBC opinion columnist James Surowiecki. After significant backlash on Twitter, MSNBC deleted the tweet.

Surowiecki attacked CNN for its segment on a family of eleven struggling with inflation because of their weekly purchase of 12 gallons of milk. Surowiecki whined: “the segment succumbed to one of the media’s worst tendencies: taking a real issue [of inflation] and overhyping it beyond recognition.” Question: how can you overhype inflation if it’s projected to “Get Much Worse, Even if Shortages End,” as Barron’s magazine warned in an Oct. 20 headline? Surowiecki then took a page out of New York Times senior economic correspondent Neil Irwin’s book and tried to make the overtly disastrous implications of high inflation seem like an exaggeration: “American consumers are, relatively speaking, flush, and it’s that strong demand for goods and services that is sending prices higher.” 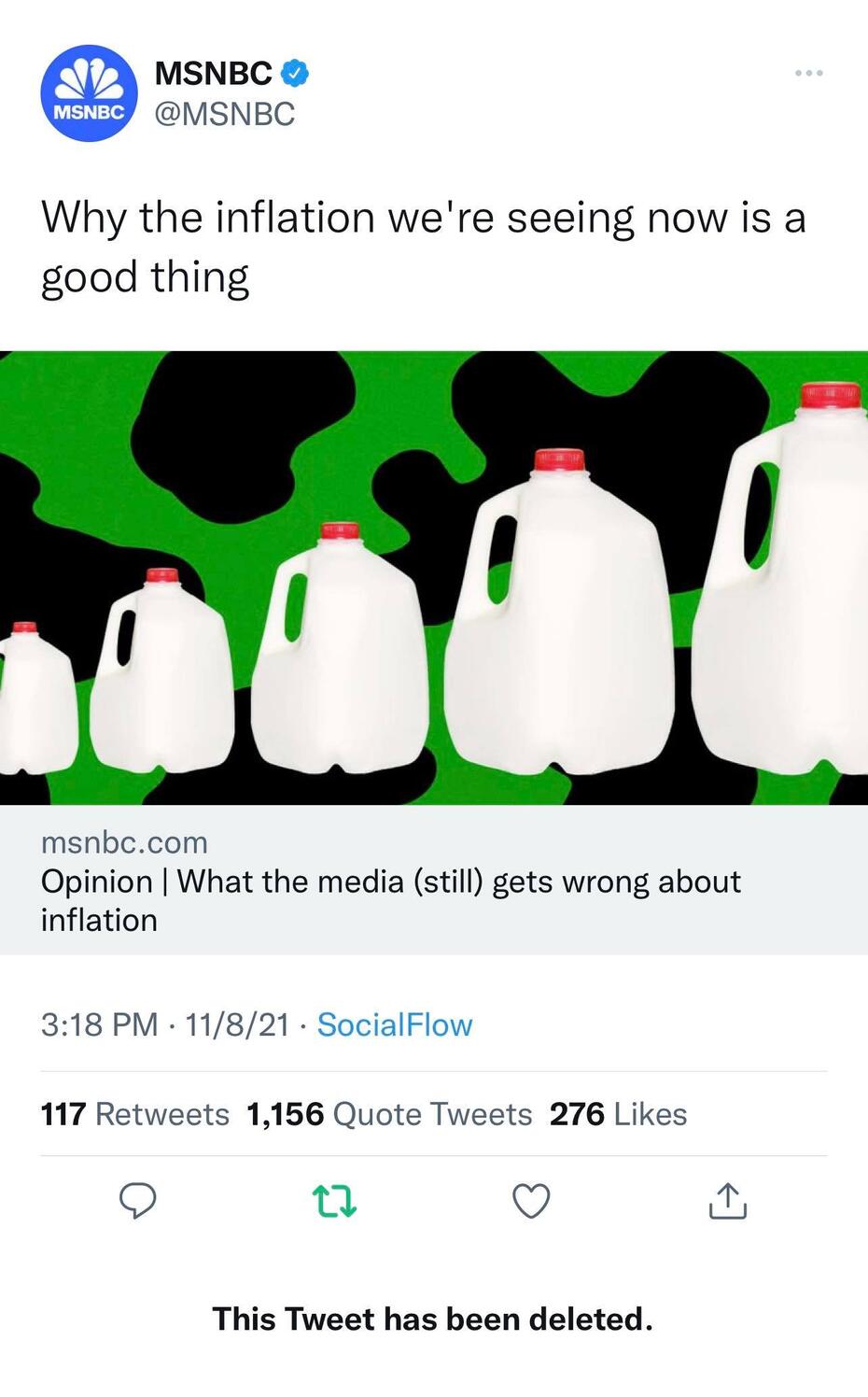 Surowiecki turned economics on its head and tried to paint the current inflation as a sign of healthy economic recovery. “The inflation we’re seeing is not, then, some mysterious affliction that’s descended on the economy. It’s the predictable product of the economy’s rapid recovery, and its costs have been offset, to a large degree, by robust wage growth and government policies,” he bleated. Is that why the Society of Human Resource Management wrote in September that “rising prices mean higher salaries aren't likely to keep pace with inflation” Surowiecki? Of course, he never mentioned anything about the low labor participation rate (61.6 percent), “the lowest since the 1970s (except for during the lockdowns of 2020).”

And CNN just reported Nov. 8 that “there is a realization that inflation will be sticking around longer as supply struggles to keep up with surging demand.”

Erick Erickson Show Host Erick Erickson slapped Surowiecki’s argument down on Twitter: “Another reminder that progressives hate you and think you are stupid. All you have to do is respect the voters and you people are not even capable of that.”

Another reminder that progressives hate you and think you are stupid. All you have to do is respect the voters and you people are not even capable of that. https://t.co/mG1TW1zbde

Conservatives are under attack. Contact MSNBC at (800) 952-5210 and demand it report accurately on the disastrous economic implications of high inflation.