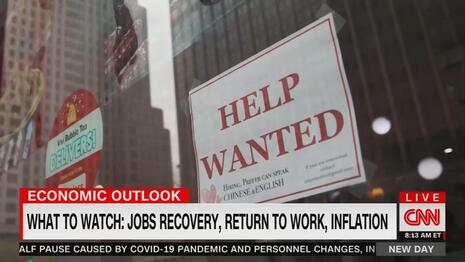 CNN reporter Matt Egan wrote yet another propaganda piece in an apparent attempt to protect President Joe Biden. The Sept. 17 piece masqueraded as news, and was headlined: “Forget inflation. This billionaire investor worries about democracy.”

The hot take babbled how Carlyle Group co-founder David Rubenstein was “shrugging off fears of runaway inflation and concerns about looming tax hikes” because he was “far more worried these days about the state of American democracy.”

Egan boosted Rubenstein’s red herring fallacy that he instead viewed COVID-19 and the Jan. 6 riot “as two significant ‘stress tests’ of American democracy — ones that have further divided the country.”

Egan must have missed Civics 101 in college: The United States of America is a constitutional republic, not a democracy. Perhaps he also missed the inflation report by Bloomberg News that Americans were “seeing the worst buying conditions in decades on high prices.” The Bloomberg News report was released the same day Egan published his drivel.

Egan’s latest drivel gaslighting Americans on the threat of inflation was just as asinine as when he tried to protect Biden by saying he “isn’t to blame for high gas prices – and has few options to lower them.”

Egan even admits in the sixteenth paragraph of his latest piece that “price hikes have in some cases wiped out pay raises for workers.” “Some cases” Egan? Really? His downplayed characterization of inflation eating into pay raises flies right in the face of economic reality. The Washington Post released a damning story on inflation released the same day as Egan’s, headlined: “Inflation Has Turned $15 an Hour Wages Into a Setback.” The Post was more forthcoming in its reporting on the dire inflation situation:

Many Americans have been delighted to see wages rising since the end of the pandemic. But whether they realize it yet, inflation has already eaten up all of those gains — which highlights the fact that the U.S. economy has no system for making sure that wages keep up with inflation.

But Egan attempted to shift focus away from the sour inflation news under Biden and instead played on Rubenstein’s dismissal that there “are bigger things to worry about than the monthly inflation rate.”  Progressive economist Larry Summers would likely disagree. He warned recently that “the primary risk to the U.S. economy is overheating — and inflation.” [Emphasis added.]

Egan also took the time to randomly point out Rubenstein’s support for the reappointment of Federal Reserve Chairman Jerome Powell because “‘[h]e stood up to Trump.’”

Conservatives are under attack. Contact CNN at 1-(404)-827-1500 and demand Egan report economic news fairly and stop attempting to protect the Biden administration from the disastrous policies it is inflicting on the U.S. economy.