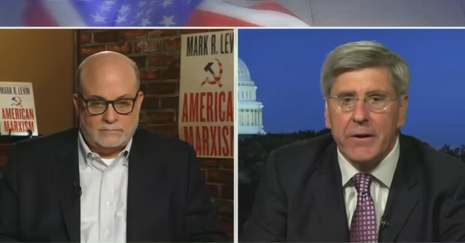 Moore likened every leftist wish list item in the phony $3.5 trillion infrastructure bill that Democrats are pushing to “World War III. We cannot allow them to do this. Every bad idea — you know, they want to re-regulate the economy.” Moore continued: “They’ve got critical race theory in here. They’ve got this Modern Monetary Theory [MMT] idea that they can just keep borrowing and borrowing forever, and it’s not going to cause a collapse. It is so bad.”

Moore further assessed that “every bad idea that you talk about every night on the radio — it’s in this bill!” The famed economist concluded that we would be spending decades “undoing the [economic] damage that the Biden Democrats want to do over the next three or four months.”

Levin questioned the efficacy of a “representative system” that involves congressional Democrat staffers writing massive bills where the contents are generally unknown by GOP congressional members by the time of voting. Moore broke down the multitrillion-dollar spending agenda into layman's terms by referencing the more than $28.6 trillion national debt. He concluded that the burden being laid on the backs of future generations because of the left’s gargantuan spending is the equivalent of “fiscal child abuse.” As Moore stated:

Every time a baby is born in the United States in the maternity ward and the parents are holding this newborn infant, that child is being tagged with a $750,000 share of the national debt. Seven-hundred and fifty — it’s like adding a mortgage onto the toe of a young child every time they’re born in this country. I mean, this is fiscal child abuse what’s happening.