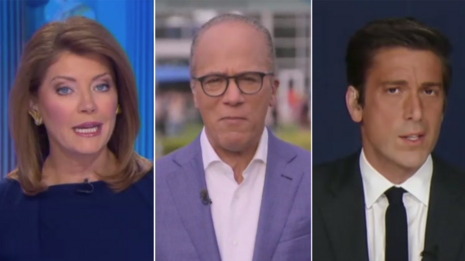 The Associated Press (AP) reported that Monday disclosures revealed Cuomo was “paid a $3.1 million advance to write his COVID-19 leadership book last year.” In addition, “under his publishing contract, [Cuomo] will make another $2 million on the memoir over the next two years.” AP stated that the windfall “inflamed critics who have said it was inappropriate for Cuomo to personally enrich himself with a self-congratulatory book, published just as the state was seeing a deadly resurgence in infections last October.” The scandal-plagued Cuomo was already under fire for his aides reportedly burying COVID-19 death toll data following his mandate that nursing homes be forced to accept COVID-positive patients.

ABC's World News Tonight, the CBS Evening News and NBC Nightly News ignored the story during their May 17 broadcasts. ABC, in particular, was brazen enough to report that Cuomo said, “we have to get back to life and living,” concerning his state lifting its “indoor and outdoor mask rule.” ABC did this while censoring news on Cuomo’s book cash flows.

Also, Cuomo was reportedly hesitant to disclose how much money he was making off of the book:

Cuomo, a Democrat, had for months declined to say how much money he made from writing ‘American Crisis: Leadership Lessons From the COVID-19 Pandemic,’ published by Crown Publishing Group, a division of Penguin Random House. The book largely recounts the governor’s once-daily press conferences on the COVID-19 pandemic.

Nnaemeka continued to hammer Cuomo’s nefarious leadership when the pandemic was at its peak: “Last June, millions of New Yorkers were struggling to keep their families safe, and thousands of seniors were struggling to survive in the state’s nursing homes, while the governor was having his staffers write a book that would make him millions off of the still-raging public health crisis.”

The Big Three were apparently more concerned with pretending the story of Cuomo making millions of dollars off a book didn’t exist.