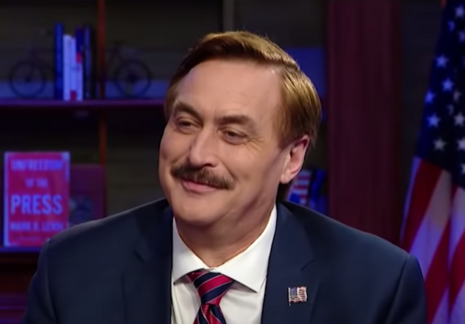 Lindell stated in a video promotion of his venture — called MyStore — on the MyPillow website: “For years entrepreneurs and inventors have came to me with products and ideas, and they don't know how to market them. Or I haven't had the time even to show them.” In addition, “I am going to put vetted products from great entrepreneurs up here, like you see a sampling of them here today, that are going to change this country.” Business Insider billed MyStore as “a patriotism-themed e-commerce platform.” In Lindell’s assessment, “We're finally going to be able to see these products and be able to get these great entrepreneurs, their great ideas, out to you, the public.”

Lindell announced his plans on "[Steve Bannon’s podcast War Room: Pandemic] that he was launching a company called MyStore as a rival to Amazon,” Insider noted.

Insider reported that the MyPillow website “features a version of MyStore with 81 products. These include ‘freedom flags,’ ‘freedom coffee,’ and an ‘uncommon US flagpole.’”

The announcement of MyStore came after Lindell suffered a steady barrage of seemingly endless attacks by the media and censorship at the hands of Big Tech between 2020 and 2021.

Just recently, both YouTube and Vimeo removed Lindell’s documentary Absolute Proof. The documentary called the results of the 2020 presidential election into question.

The Washington Post celebrated Dominion Voting Systems launching a lawsuit against Lindell for his election claims in a news item that read like a venom-spewing op-ed: “Mike Lindell made his bed with Trump’s bogus conspiracies. Now, he gets to lie in it.”

In January 2021, Twitter banned Lindell from the platform “due to repeated violations of our Civic Integrity Policy,” a spokesperson told MRC Free Speech America.

But Lindell’s election claims are not the only reason why he’s been attacked by the far left. His faith as a Christian has also come under heavy fire.

Lindell discussed the importance of faith when he gave a speech at the White House during the height of the coronavirus pandemic in March 2020. He also announced his pledge to produce “50,000 medical face masks a day to distribute around the country.”

It's obviously above my pay grade. I don't make the call that we take them [Trump's coronavirus briefings] or not, but it seems crazy to me that everyone's still taking them when you got the MyPillow guy getting up there talking about reading the Bible.

Conservatives are under attack. Contact Amazon at (206) 266-1000 and demand it mirror the First Amendment while providing transparency, clarity on “hate speech” and equal footing for conservatives. If you have been censored, contact us at the Media Research Center contact form, and help us hold Big Tech accountable.