Here’s a rule of thumb for ABC’s, CBS’s and NBC’s evening news shows: If President Donald Trump’s economy gets good news at all, the Big Three either downplay or ignore it. 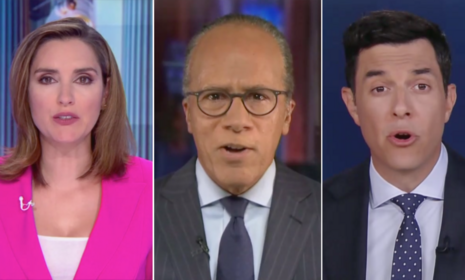 Jobless claims had fallen beneath the 1 million mark for the first time since mid-March, according to CNBC. This is great news. CNBC noted that this was “a sign that the labor market is continuing its recovery from the coronavirus pandemic.” Also, the total claims of 963,000 for the week ended August 8, “were well below the estimate of 1.1 million from economists surveyed by Dow Jones.” [Emphasis added.]

Fill-in anchor Tom Llamas slapped the good news down by arbitrarily noting that the numbers were “still far above the worst week of the Great Recession.” Comparing a pandemic-induced economic downturn with a recession that occurred because of bad government policies is a false equivalency.

Llamas proceeded to fling out the statistic that “15.5 million American are still collecting benefits.” He ignored mentioning that this was “a decrease of 604,000 from a week ago,” according to CNBC.

Fill-in anchor Margaret Brennan immediately minimized the news by saying that the jobless claims number “dipped slightly below 1 million” for the first time in 20 weeks. That’s a less than positive take when compared toCNBC’s positive note that the fall was in fact “well below the estimate of 1.1 million.” Brennan then gutted the good news further with a dark pivot: “One sector still suffering historic losses is the leisure and hospitality industry.”

CBS News correspondent Mireya Villarreal then went on a 95-second propaganda ramble on the leisure and hospitality sector woes, completely blunting the good news. CBS then shifted to a clip of Grant Thornton Chief Economist Diane Swonk, who grumbled that “[w]e traded quick reopenings for what could be much larger and longer term pain — and many more of these restaurants and bars having to shut for good.”

Anchor Lester Holt wasted no time in beginning the jobless claims segment with negativity: “With those talks on new relief on hold, millions of Americans are still in limbo, while unemployment claims dip below 1 million last week. So many families are still suffering.”

NBC News business and technology correspondent Jo Ling Kent took the reins and pushed propaganda for 101 seconds, smashing any positive takeaways from the good news. She said, “Although jobless claims dropped below one million for the first time last week since the pandemic began, it’s still nearly four times more than early March, and there’s no relief in sight.”

Both Holt and Kent diverted attention away from the jobless claims report to the ongoing gridlock in Congress to extend unemployment benefits. One chyron even appeared as an attack against Trump: “Where is unemployment relief promised by Trump?”

CNBC noted that the decline in jobless claims “‘provides some fuel for the argument that the enhanced benefits were providing an incentive for people to stay away from returning to work if they had the option,” according to a note by Jefferies Financial Group. Jefferies continued: “The data of the past two weeks will not help the arguments of lawmakers fighting to extend the expired benefits.” [Emphasis added.]