Patricia Arquette to Followers: Cause ‘Economic Shut Down,’ ‘#RESIST’

The lefty co-star of the third installment in the Nightmare on Elm Street series is apparently trying to help force a nightmare on Wall Street.

Patricia Arquette felt it worthy of the #RESIST movement to summon her inner Bill Maher and implore followers to tank the U.S. economy. How? She told her followers to not buy anything on March 2nd. Really.

Arquette took to Instagram to post what appears to be a screenshot of a February 15 tweet that read: “A REMINDER: please contact everyone you know. On Monday, March 2nd, we’re going to have an Economic Shutdown.” The babbling continued: “ #Shutitdown It’s easy. DO NOT SPEND ANY MONEY ON ANYTHING ANYWHERE. Our goal is to cause a $238.2 billion dollar blip on the federal government’s records.” [Emphasis added.]

Arquette reiterated the call to action in her caption:

“March 2 there is an economic shut down action. Don’t purchase anything on this day. #RESIST” [Emphasis added]. 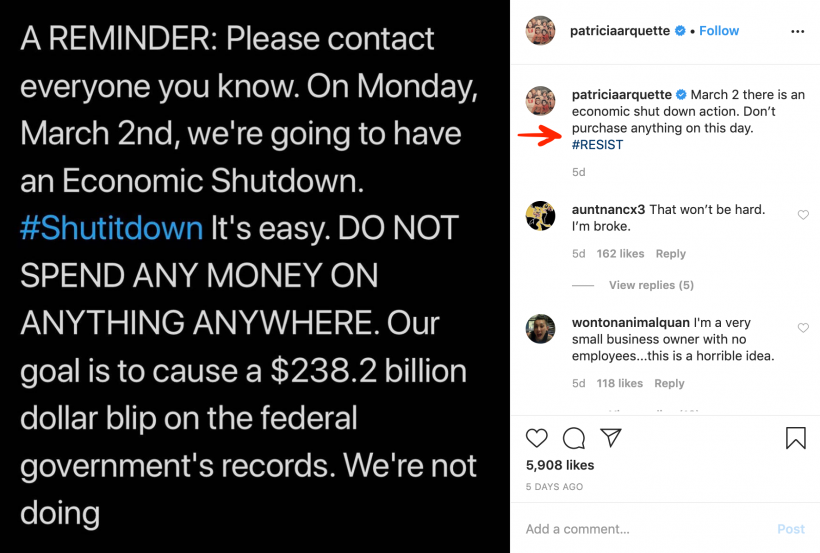 Did she take into account that people spend money on things like medication? What about other necessities?

As Instagram user nimrod_ney wrote in response to Arquette: “The stupidest thing ever, purposely trying to hurt the most vulnerable, for what?”

But for the sake of #RESIST, any deleterious effect such a foolish proposal would have on small businesses is apparently inconsequential. Arquette might not mind anyway, given that she enjoys a net worth of approximately $24 million.

Arquette did not stop there though.

“Modified 3-step plan to take control of the US. 1. March 2nd, do not spend any money on anything. Don’t change autopays, etc. Just don’t initiate any purchases period. Our goal is to cause a 1-day $238.2 billion ripple in the US GDP. It’s a semi-economic shutdown. #Shutitdown.” [Emphasis added.]

But then again, this is the same actress who turned her Golden Globe Awards acceptance speech into a get-out-the-vote plea and anti-war screed against Trump:

“We will see a country on the brink of war, the United States of America, a president tweeting out a threat of 52 bombs including cultural sites, young people risking their lives traveling across the world, people not knowing if bombs are going to drop on their kids' heads.”

Maybe she should heed comedian Ricky Gervais’ advice: “You're in no position to lecture the public about anything. You know nothing about the real world.”