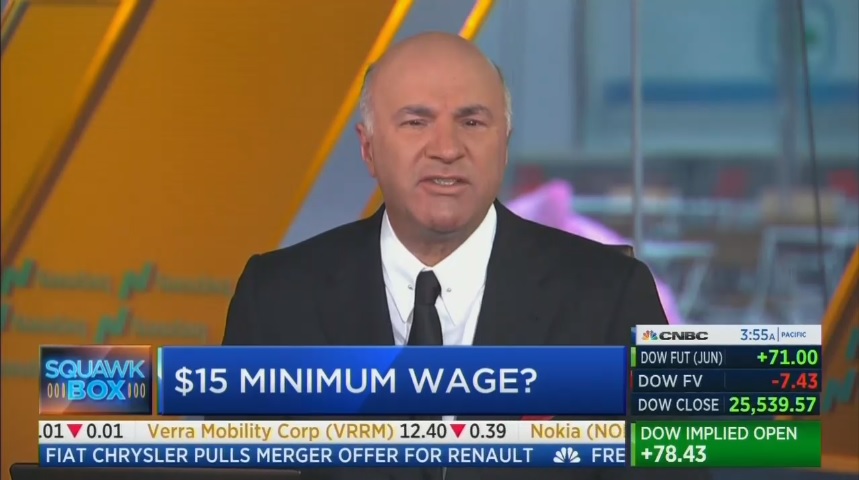 Sanders went to Arkansas to attack Walmart over wages and demanded at its annual shareholders meeting that it raise wages even more on June 5. O’Leary and Storch both opposed a wage mandate, saying markets do a better job of setting wages than the government.

The Storch Advisors CEO insisted that “if you force wages up you know, to $15-an-hour,  there will be fewer jobs, fewer higher paying jobs,” because companies will look to do more automation and outsourcing. And with a currently strong labor market, wages are already going up — sometimes as high as $15-an-hour.

Co-anchor Becky Quick pointed out that Walmart led retailers with wage hikes only to be followed by Amazon, Target and others.

O’Leary also jabbed at Sanders saying, “You can’t blame him for doing this. He can’t get much press anymore.” He also dismissed Sanders’ presidential chances entirely “at full employment.”

“My question is this whole metric of having imposed minimum wages at all,” O’Leary said. “Well, the problem is it takes a state like New York to boast this $15 and makes it uncompetitive. Amazon decided not to come here.” Amazon decided not to put a headquarters there after being opposed by Democratic socialist Rep. Alexandria Ocasio-Cortez (D-NY).

O’Leary also asked Storch, “If you could wave a magic wand, do you think the market really is a better way to determine minimum wage? Just let the market be the market, and let people compete.”

“Of course I do,” Storch replied. He said that as long as the economy was strong, “it’s going to keep growing.”

O’Leary cheerfully replied, “It’s wonderful to have a free market voice like that. It’s just refreshing and it cleanses.”

“I think the other side is, what’s the right number?” Sorkin said.

O’Leary pushed back, “The market determines the right number.”

Sorkin tried to use China as an example, saying it “determines a terrible number” there.

Such a defense of free markets was indeed refreshing and cleansing compared to the typical liberal media environment.