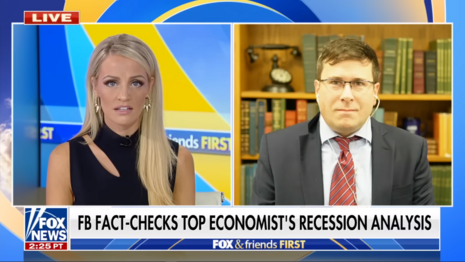 Facebook sparked outrage among free speech advocates when it fact-checked a senior economist with the American Institute of Economic Research for spreading so-called misinformation. The platform flagged the economist for — get this — correctly defining the word “recession.”

“It is absolutely Orwellian,” economist Philip Magness said on Monday's Fox & Friends First. What was Magness’s heinous thought-crime, exactly? Magness said he posted a screenshot of the White House’s attempts to redefine the word “recession” in a now infamous July 21 blog post.

The White House released its post just days ahead of the July 28 Bureau of Economic Analysis report revealing GDP fell for the second quarter in a row, which meets the main description of a recession used during the “past century,” Magness said.

Even comedian Conan O’Brian mocked the White House in a viral post on Twitter July 27: “The White House now says it’s only a recession if you see a salamander wearing a top hat.”

The White House now says it’s only a recession if you see a salamander wearing a top hat.

PolitiFact, a fact-checking partner of Facebook, flagged Magness’s post, he said. This Pravda-like organization stepped in and began “carrying water on behalf of the White House for political reasons, not economic reasons,” he added.

This is the same PolitiFact that engaged in a battle of wits with the artificial intelligence-powered Siri on the true definition of the word “recession.” At the time this article was published, Siri still defined a “recession” as “a period of temporary economic decline during which trade and industrial activity are reduced, generally identified by a fall in GDP of two successive quarters.”

Magness explained that he simply posted a screenshot of the White House’s own blog post on recession. He later added that his post going viral was an example of “sunlight” being “the best disinfectant,” in this case, for PolitiFact’s political defense of the Biden administration. Facebook did not respond to MRC Business’s request for comment.

The economist said his post “drew attention to the fact that [PolitiFact is] using political talking points in lieu of actual fact-checking. They’re stepping in and becoming partisan actors here.”

Magness also commented on President Joe Biden’s so-called “Inflation Reduction Act.” The plan will cost a mammoth $670 billion if passed, according to Forbes.

Whether it’s recession or inflation, this is just more of the same for the Biden administration's ineffective economic policy, Magness said. “The real problem here is they ignored inflation as an issue for basically the last year,” he said. “They were calling it ‘tranistory,’ they were pretending it would just magically go away.”

"Now, they’re finding themselves above nine percent year-over-year [as] the projected inflation rate and they're trying to play catch-up, but they're playing catch-up very ineffectively, just going back to the old tax-and-spend habits that have been the Joe Biden agenda from the beginning."
Conservatives are under attack. Suggest to PolitiFact that it fact-check its own website for wrongly defining the word “recession” using this form.