Shame On NewsBusters! A Screenwriter's Rebuttal on 'House of Cards'

I am the enemy.

Well, that’s what you tell me.  Based on the comments here at NewsBusters, I’m “evil,” a “corrupt ideology peddler,” and an “atheist anti-God hater.” We’ve never met, yet you despise me…

Just because I work in New Sodom itself!  As a producer/writer of television dramas for over 12 years, it seems I’m part of the Liberal-Homosexual Agenda spreading Marxist God-Hating propaganda through quality television like Netflix’s House of Cards.

Now I don’t produce the show, but after reading “Shame on Netflix,” I immediately emailed NewsBusters to defend it: “How dare you besmirch quality television like House of Cards!  Your words are LIES!”  But instead of kidnapping me for enhanced interrogations, NewsBusters executive editor Tim Graham offered to post my rebuttal. Which puts me in a jam…I have to tell my liberal-Nazi neighbors some conservatives really are fair and balanced.

Now before you brand me a mindless drone for the LHA, you should also know: I’m a Church-belonging, Bible-obeying, saved by His blood, Christ-follower sent from a Fort Worth church with my wife as missionaries to Hollywood.

Nor am I the only one. Conservatives and Christians produce the shows you follow, the films you see, and make the decisions at networks and studios. Every one striving to get the values and messages we all care about faithfully portrayed on our screens.

It’s from this perspective, I thank Netflix and House of Cards for showing President Frank Underwood spit on a statue of Christ. And you should, too!  Allow me to explain.

1. First of all, understand no one committed or exploited real blasphemy for this scene. The statue is fake. It’s a light-weight, half-finished, and non-consecrated prop.

3. The scene wasn’t designed “to shock viewers and loosen lips,” as Mr. Graham asserts. If it was, Netflix would’ve teased it, but they didn’t. Because out of context it would’ve repelled, not increased subscriptions…which is Netflix’s only agenda.

Networks or actors do not create these scenes, writers and producers do. So if you must, attack Beau Willimon, creator & showrunner (boss) of House of Cards…but you’d be wrong to. Because his intention isn’t to blaspheme, undermine Christians, or promote a liberal agenda…it’s the opposite!  Willimon wants you to see —

Frank Underwood is a villain… Of Shakespearean magnitude! Nor does he want you to approve Frank’s actions — especially here. This scene echoes another from last season, where Frank begins to pray to God but stops, “No, I pray to myself.” Making himself God’s equal. He says he doesn’t believe, but yet he’s threatened by God’s power.

Frank cannot erase his sin(s)…  When Frank tries to wipe away his spit, the statue falls before he even touches it. A falling crucifix traditionally means God’s blessing is gone…so we can’t help but see this as God’s answer: “I will not forgive your crimes or (allow you to) blot out your sins from my sight” (Jeremiah 18:23).

Frank is not God’s President…  Playing Samuel to Frank’s Saul, the Bishop tells Frank the only way to lead is “serve the Lord and through that you serve others. Two rules: love God, love each other. Period." (Mark 12:28-34—Christ’s greatest command!) You weren’t chosen, Mr. President, only (Christ) was.” So when Frank spits—disobeying God’s first rule—and the statue falls, it’s clear: God does not choose Frank (in every sense of the word).

Frank is going down…  What really chaps Frank’s pride is the Bishop's words: “no such thing as absolute power for us, except on the receiving end.” Warning him Christ rose by dying, not by “serving himself” as Frank does.  Reminding us when ‘Christ’ falls (dying), it doesn’t mean Frank wins…it’s foreshadowing Christ will kick Frank’s ass! 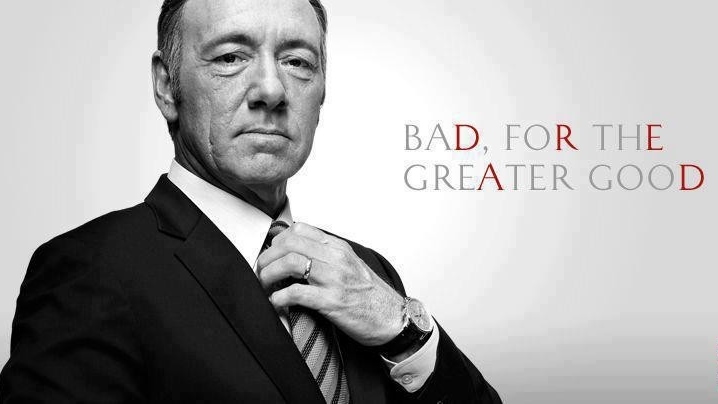 But we already know Willimon is weaving a tale of hubris…the show is called House of Cards!  Like in Richard III, Citizen Kane, or the story of Saul, we must see the wicked sow to enjoy the reap…so at the end, we’ll ask ourselves what Christ asks in the Gospels, ‘What does it benefit someone to gain the world, but lose their soul?'

The only shocking thing about this scene, is the writer…Has a religious leader correctly quote New Testament scripture in a positive way; gives the Christian big balls (he rides a motorcycle) to boldly speak Biblical wisdom to a dangerous President; bends over backwards to portray God is not silent, loudly answering the wicked; And, for bonus points, he made the bad guy a Democrat.

I for one REJOICE!  What I don’t understand is, why aren't NewsBusters and its readers?

Because when you complain about the very thing you say you want, you shoot yourself in the foot…and people like me in the back! Let me show you one of my scars:

While writing on a cop series for CBS, I convinced the showrunner (a lesbian, so there goes the agenda theory) one of our main characters should explore Christianity, eventually becoming ‘saved.’ But CBS balked. No agenda, they just didn’t want to offend their Christian and conservative viewers, who send hate-mail (very hateful, I’ve read them) whenever a show depicted faith -- even positively. So religion was off the table!

And you say I’m the enemy…

If you really want to influence ‘Hollywood’ for the better, here’s how to do it:

1. Spend more time pointing out positive portrayals than negative ones.  Whether in articles or emails, thank the networks and studios when you see something you like. Ask them for more. Here’s a tip for NewsBusters: Write one praising Rectify on Sundance.

2. Learn to identify themes and elements you can applaud in any story. Like in HoC, what at first blush appears negative, may be very positive.

3.If you must complain, make sure you know what you’re talking about. Research the creators. See what others say online…maybe you misunderstood something. You save yourself from looking like a fool.

4. If you do complain, never attack!  I don’t care if they've attacked you. They won’t hear you; or worse, they’ll misunderstand you. Politely point out their error and thank them for reading. Read Proverbs for some pointers.

5. Stop saying there’s a monolithic liberal agenda in Hollywood.  It’s a lie!  Yes, some here hate Christians and conservatives. Some are vocal about it. But most don’t care.

Articles and hate-mail like “Shame on Netflix” only make it harder for those of us trying to create the stories you want to see. But if we work together, we’ll all have a lot more of what we want on our screens.