The last year or so could be described as The Year of Transgender Propaganda. The Hollywood and news-media push on the latest frontier of  “gender fluidity” demonstrates the libertine left’s absolute arrogance that the LGBT revolution is an unstoppable juggernaut.

Time placed  Laverne Cox on a “Transgender Tipping Point” cover last June, and the aggressive culture-tipping took off. Amazon created a series around a retiree and father of three deciding he was a woman in “Transparent,” and won Golden Globes. Fox’s “Glee” had their female football coach grow a beard and be celebrated by a “historic” 200-member transgender choir.

The cherry on this vomit is Bruce Jenner. 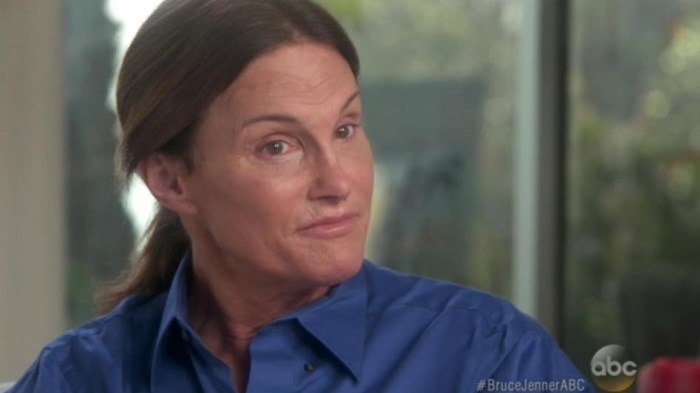 The one-time Wheaties-box superstar of the 1976 Olympics has become the real-life 65-year-old retiree and father of six who announced “For all intents and purposes, I am a woman.” This “moment” was marked by a big two-hour ABC News special. Jenner pointed to his 1976 Olympics pictures and said “That is me. That is her.”

Sawyer began by suggesting Jenner was in “a white-hot vortex of cameras, questions, speculation, jokes, and ridicule.” But ABC was only there to bathe him with empathy and celebrate the New Normal.

Jenner said he told his children the Lord gave him good qualities, but then “God looks down and chuckles a little bit. And goes, you know, hey, let's give him the soul of a female and let's see how he deals with that, you know?” Sawyer the educator-enabler proclaimed “And people have to know that you can want to identify as a woman, and still?” Jenner replied on cue: “Kick butt.” And then he cackled.

ABC – and the rest of the mainstream-the-fringe media – aren’t going to allow traditionalists in for a debate as Jenner dabs his eyes with a tissue and unfurls his “truth.” The only skepticism Jenner faced was whether this was just another spectacle for the Kardashian-Jenner reality-show racket. After all, the E! channel is doing a new reality series dragging out this “educational” exercise.

Jenner insisted the idea that this was a business was ridiculous: “what I'm doing is going to do some good and we're going to change the world.”

In the second hour, Jenner’s family was brought in to shake pom-poms for the transition. His son Brandon claimed “I feel like I'm getting an upgraded version of my dad.” Daughter Cassandra said “I just held his hand and I cried with him and I just told him how proud of him I was and how inspired I was.”

His 89-year-old mother Esther announced “I was very proud of you when you stood on that [Olympics] podium in Montreal. I never thought I could be more proud of you, but I'm learning I can be.”

Over and over again, Jenner was honored for his “courage.” Sawyer ended her show by proclaiming, “For centuries, so many transgender people living in the shadows. Hard to imagine the courage it took for a few brave people to come forward and speak.”

Some transgender advocates suggested Jenner wasn’t an ideal advocate. But in fact, he is – smack dab in the center of the “white hot vortex” of celebrity gossip and reality TV. That’s what brought the crowd to ABC, for this dialogue demonstrating the decline and fall of our culture and our common sense.