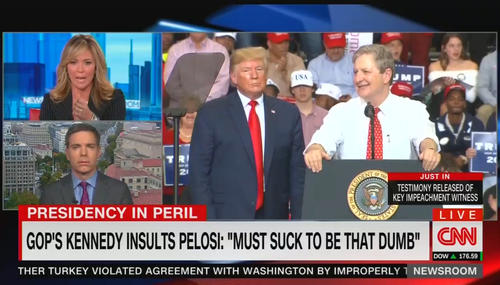 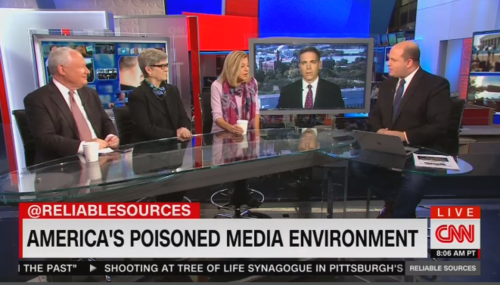 Nicholas Fondacaro
October 28th, 2018 5:31 PM
It’s no secret CNN has a great disdain for Fox News and right-wing media in general, so it was no surprise that during Sunday’s so-called Reliable Sources, host Brian Stelter and his panel (made up of largely liberal and anti-Trump commentators) blamed both for the political violence and death from the past few days. Only one, the Daily Beast’s Matt Lewis, dared to admit that blame for the super-… 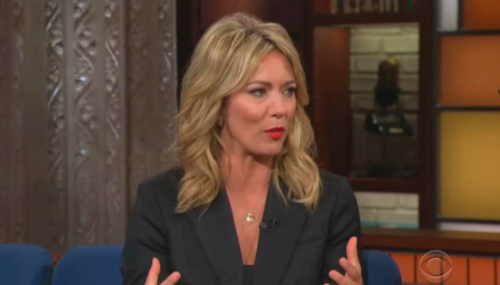 Randy Hall
October 17th, 2018 6:20 PM
While a guest on Tuesday night’s edition of The Late Show With Stephen Colbert on CBS, Brooke Baldwin, host of the weekday CNN Newsroom program, doubled down on her contention that liberal protesters shouldn’t be described by using the “m-word” or “mob.” Colbert began the discussion by condescendingly stating: “You got in a little trouble from ‘the Twitter people’ because you said one of your… 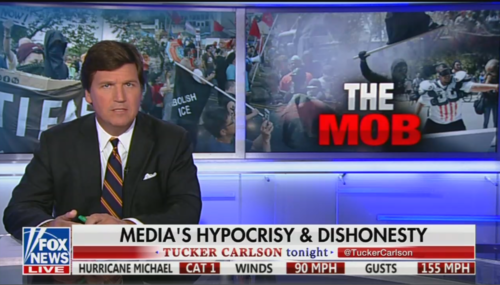 Nicholas Fondacaro
October 10th, 2018 11:41 PM
Following the Senate’s confirmation vote to elevate Brett Kavanaugh to an associate justice of the Supreme Court, a radical pack of leftist protesters descended on the highest court in the land. Together, some scaled the statues while others clawed and banged on the historic building's massive bronze doors. By all reasonable accounts, it was a raging mob but the liberal media despised that term.… 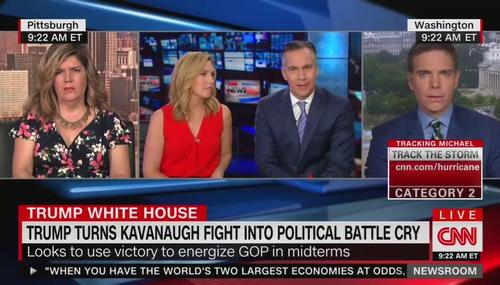 Kristine Marsh
October 9th, 2018 12:15 PM
CNN Newsroom hosts Jim Sciutto and Poppy Harlow tried to interrupt and combat their two right leaning guests Tuesday during a segment on the public’s opinion of Brett Kavanaugh. As each guest gave an answer the two liberal news anchors didn’t like, they immediately questioned their responses before they could even finish them. Sciutto even tried to trap one guest with a loaded question that put… 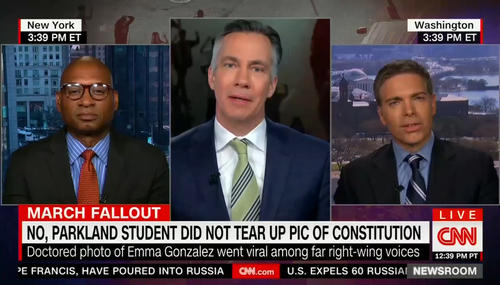 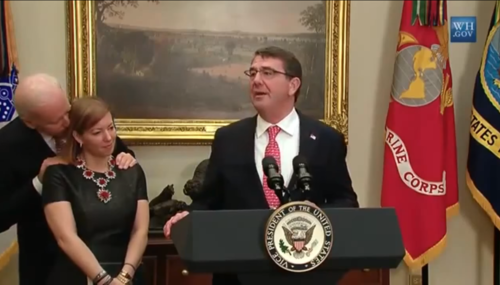 Nicholas Fondacaro
November 14th, 2017 12:00 AM
With former Vice President Joe Biden making the rounds on his book tour, many in the media have been fawning over the idea of him running for president in 2020. But during HLN’s S.E. Cupp Unfiltered, the panel had a reality check for all those hoping and praying for Biden to be president. “And the other thing too is, going back to our previous story, in this environment where groping is obviously… 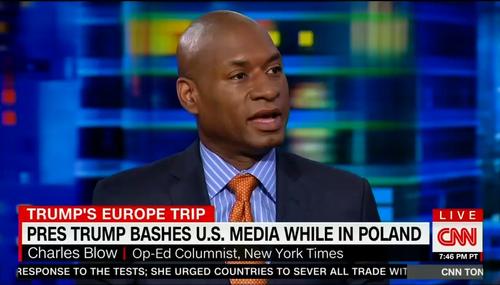 Brad Wilmouth
July 7th, 2017 12:03 PM
Appearing as a guest on Thursday's CNN Tonight, liberal New York Times columnist and CNN commentator Charles Blow managed to make a case that there is a liberal bias in the dominant media even while concluding that the liberal bias claim is "kind of false" as he asserted that there is actually an "urban media bias" instead. Host Don Lemon and CNN media reporter Brian Stelter voiced agreement with… 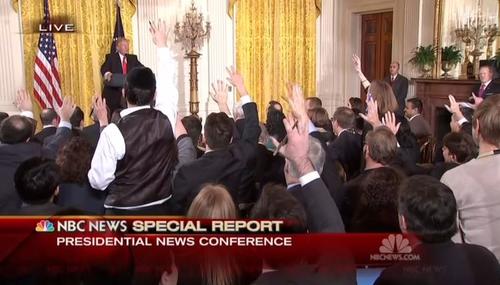 The Media Versus America

Jeffrey Lord
February 18th, 2017 3:11 PM
You might call it The Media versus America. The President of the United States held a press conference on Thursday. On that, everyone agreed. But after that? Words like “unhinged” a particular favorite to describe the event. Here’s a sample of the headline reaction.The New York Times: An Aggrieved President Moves His Surrogates Aside, The Washington Post: Debrief: In an erratic performance, Trump… 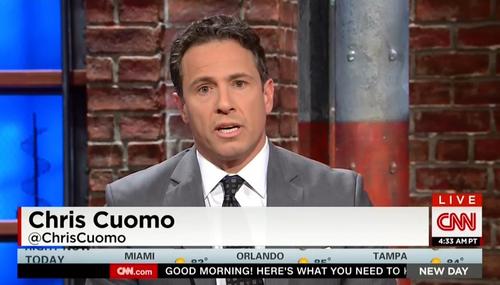 Brad Wilmouth
April 29th, 2016 9:59 AM
On Friday's New Day on CNN, during a discussion of violent protests outside a Donald Trump appearance in Costa Mesa, California, after conservative CNN political commentator Matt Lewis suggested that they might be "leftist agitators" who are effectively boosting Trump's campaign with their behavior, co-host Chris Cuomo defused his characterization by asserting that many of them "were just… 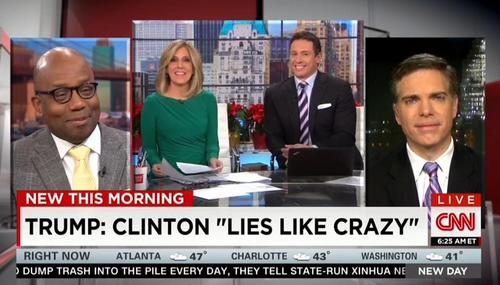 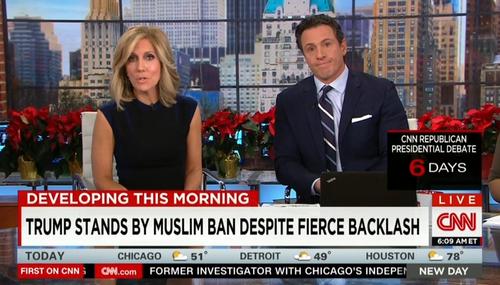 Matthew Balan
December 9th, 2015 6:28 PM
CNN's Chris Cuomo again acted as a liberal activist on Wednesday's New Day during a panel discussion on Donald Trump's controversial plan to ban Muslim immigration to the U.S. Cuomo asserted that it was the Republican presidential candidates' "moment to step up and say how they are different on this particular issue," because, in his view, "Republicans are reaping what they've sown. You know,… 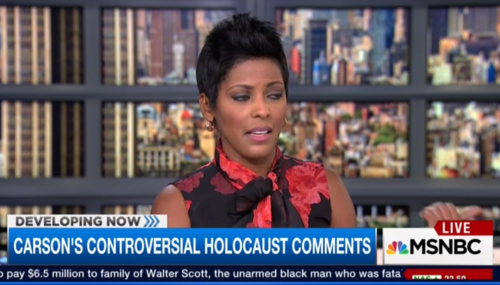 Michael McKinney
October 9th, 2015 3:40 PM
Friday on MBSNC’s NewsNation, Tamron Hall addressed Ben Carson’s statements on gun control and how he would have dealt with the gunman at Umpqua. Tamron would entertain the attacks on Carson by Matt K. Lewis and Joan Walsh. Lewis accused Carson of opining where he shouldn't and should know better. While adding her own allegation that Carson would have tried to have the children assault a gunman, …