As liberal film maker Spike Lee appeared as a guest on CNN's Piers Morgan Tonight, he complained that the National Rifle Association has a "Vulcan death grip" that prevents the enaction of further gun control.

During a discussion of politics, host Piers Morgan recounted recent high-profile shootings and raised the issue of gun control:

Spike Lee: If Obama Loses 'I Will Be Dead Before' There's Another Black President

Filmmaker Spike Lee said Monday that if Barack Obama loses his reelection bid in November, "I will be dead before" there's another black president.

Lee also said during an interview with entertainment website Vulture that Republican presidential candidate Mitt Romney's religion is going to play a huge factor in the upcoming election:

Open Thread: Even Spike Lee Admits Obama Critics May Not Be Racist

When Spike Lee, one of the most notorious racial grievancemongers, admits that people may have legitimate reasons to dislike President Obama, then you know people may be tuning out the media's virtual non-stop campaign to demonize conservatives.

In an interview with GQ magazine, Lee, known primarily for films he made in the 80s and 90s, stated that the bad economy might be reason enough for people to oppose Obama. Unfortunately, he couldn't resist raising the specter of racism entirely:

Formerly relevant comedian Roseanne Barr has become the second leftist entertainment celebrity to threaten the family of George Zimmerman, the accused shooter in the death of Florida teenager Trayvon Martin by posting the home address of his parents on Twitter.

While she quickly deleted her tweet after an onslaught of criticism by her 110,000+ followers, Barr continued to defend her action, stating that it "was good to let ppl know that no one can hide anymore." She also threatened to repeat the malicious tweet later: "If Zimmerman isn’t arrested I’ll rt his address again." She added, "maybe go 2 his house myself."

As of this writing, Barr has still refused to say that she had done something wrong by posting the address.

A few days ago, left-wing director Spike Lee, who has 248,000+ followers on Twitter, retweeted an item bearing what was supposed to be the address of George Zimmerman, the man who claims to have shot Miami teen Trayvon Martin in self defense a month ago in Sanford, Florida. But the address was incorrect and the occupants of the residence are an elderly couple who bear no relation to Zimmerman. As a result of Lee's retweet, they've received hate mail and, fearing for their safety, have fled their home.

Yet when it came her turn to report the development today, MSNBC's Chris Jansing did her level best to spin the news in such a way as to absolve Lee -- who directed some of the network's Lean Forward promo spots -- of any culpability for putting the couple in jeopardy. Here's the relevant transcript. Video follows the page break (MP3 audio here):

While Democrats mock Mitt Romney for his alleged lack of interest in the “very poor” and focus their political pitch on income inequality, one can’t help noticing the Obamas running around to $35,000-a-head fundraisers with the very rich and very famous in New York City and Hollywood.

Michelle Obama kicked off February with an exclusive fundraiser in Beverly Hills at the home of Netflix executive Ted Sarandos and his wife Nicole Avant, who raised Hollywood millions for the Obamas in 2008, and then became their ambassador to the Bahamas. Now Nicole Avant’s back managing Obama’s Hollywood money march. Many of Tinseltown’s titans ponied up: Jeffrey Katzenberg, Harvey Weinstein, Haim Saban, and Steve Bing, among others. (Katzenberg’s also given $2 million to the Obama-affiliated super PAC called Priorities USA Action.)

Director Spike Lee, along with his wife Tonya, came on Wednesday's Today show to promote their new children's book, but he couldn't leave without blaming the NRA for the Gabrielle Giffords shooting and slamming the United States of America for being "the most violent country in the history of civilization."

Initially both Lees just talked about their new book, Giant Steps to Change the World, but Today co-anchor Meredith Vieira couldn't let the controversial director of such films like Do The Right Thing and Malcolm X go, without pressing him to comment on the Tucson massacre as seen in the following January 12 exchange:

We’ve heard ad nauseam from a hopeful media -- Daniel Schorr of NPR, commentator Juan Williams and The New Republic among them -- that Obama will be a “post-racial” president. At least some of his supporters haven’t gotten the message.

Speaking from Utah, Lee was promoting his Jan. 19 “Inauguration Forum” at D.C.’s Howard University, when he  rhetorically asked anchor Fredricka Whitfield’s permission to call the capital Chocolate City. Whitfield is a Howard graduate.

Did you know that the Republican Party is totally white and is stuck in TV Land shows like "Leave it to Beaver," "Father Knows Best," and "Howdy Doody?"

So said film director Spike Lee Wednesday as he discussed the meaning of Tuesday's elections and the first black president with MSNBC's "Morning Joe" team.

Lee also said history will view things in terms of "BB" and "AB", meaning Before Barack and After Barack.

While you ponder, here are some of the lowlights (video embedded right):

B.C. and A.D?  Get with it, old man.  History is henceforth divided into the eras of B.B. and A.B.—Before and After Barack. And George W. might have been "misunderestimated" as he engaged in "strategery."  But that's so, like, yesterday.  Barack Obama is "pre-deortained."  By whom?  Spike Lee stopped short of saying God's hand is at work.  But he was clearly speaking in quasi-religious terms in discussing The One on today's Morning Joe. 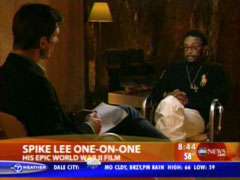 On Thursday's "Good Morning America," journalist Bill Weir touted left-wing filmmaker Spike Lee as a "social critic" and ignored any mention of the director's bizarre conspiracy theories, such as his 2005 contention that the United States government intentionally blew up the levees during Hurricane Katrina in order to flood African American areas.