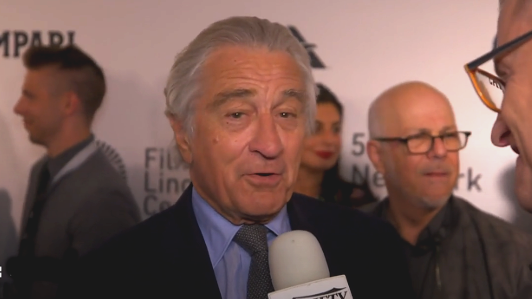 Unfortunately, time has not softened the extreme views of Robert De Niro regarding President Trump, and his hostility has apparently only been aggravated by the impeachment inquiry currently underway in the U.S. House of Representatives.

The actor made his views clear on Monday by calling the GOP occupant of the White House “such a lowlife” who “taints everyone around him.” De Niro made his hostile remarks on Monday at the 57th New York Film Festival, where a new Netflix movie he’s in --The Irishman -- had its world premiere.

Since the actor has slammed Trump ever since the Republican won the White House in November of 2016, his comments came as no surprise.

During an interview on the scene, Variety’s Marc Malkin asked the actor what he thinks of the impeachment process now underway in Congress:

I hope he gets impeached, and it has to be followed through. He’s such a low life. …  He taints everybody around him. There are very few that have escaped it. And I am amazed that so many people have not stood up to him.

De Niro ranted, "It’s disgraceful with this guy. He has no center. No ethics. No morals. He’s amoral. Immoral. He’s just — and the people around him? Not good."

The Variety article also stated that De Niro is “[n]ot a fan of the current President” and pointed back to June of 2018, when the actor greeted the Tony Awards telecast with the words “F*** Trump,” for which he received a standing ovation from the crowd. “Clearly, his feelings have not changed,” the website added.

De Niro was not the only person to use an interview by Malkin as a platform to slam the President. When asked for his opinion on impeachment, Spike Lee responded: “We shall see what we shall see.”

Malkin then pressed Lee by asking: “What do you think we’re going to see?” Lee then looked skyward and stated: “Please, God!” “Who are you looking at in 2020?” Malkin then inquired. “Who do you like?” “I’ll say this,” Lee fumed, “Agent Orange has got to go.”

Agent Orange was a form of chemical warfare used in Vietnam.

As NewsBusters has previously reported, De Niro has regularly spewed his hatred of the President on many occasions. In fact, the actor stated in mid-May that jailing Trump would actually “make American great again.”

Here is a transcript of the comments by De Niro and Lee:

MALKIN: Impeachment inquiry. What do you think?

MALKIN: What do you think we’re going to see?

LEE: I’ll say this. Agent Orange has got to go.