Conservatives George Will and Laura Ingraham both slammed the Times for this shoddy report on ABC's This Week Sunday with the former saying the truth "didn't fit their narrative" and the latter claiming it "was a shot across the bow that if you are a wealthy person in the United States, you happen to be conservative, you're going to get involved in this election, then we are going to watch everything that you do" (video follows with transcript and commentary):

ABC Lectures Rick Santorum: Stop Wasting Your 'Political Capital' and 'Get Out'

Good Morning America analyst Matt Dowd on Wednesday lectured Rick Santorum to "get out" and stop wasting "any little bit of political capital he has left." Depending on which count one looks at, Mitt Romney is currently 489 delegates short of the nomination.

That fact didn't stop Dowd from making his point clear. Over four sentences, he used the phrase "get out" four times, pronouncing, "I think he has to get out because he wants to preserve any little bit of political capital he has left and a voice in the Republican Party." The same man who, on March 26 slammed conservative states as hypocrites, instructed Santorum, "I think it would be good to get out right now before he loses Pennsylvania. But he has got to try to keep a voice in the party by getting out."

Which This Week analyst used the Trayvon Martin shooting in Florida as an excuse to slam religious conservative? It wasn't liberal host George Stephanopoulos. Instead,  Matt Dowd on Sunday said this: "We want to be a Christian nation and we want to act in a Christian manner, but, oh, by the way, we don't believe in turn the other cheek."

The former George W. Bush pollster mocked, "And we don't believe in love your enemy. And we believe in loading, loading citizens and basically give them an opportunity to shoot people." [See video below. MP3 audio here.]

John Berman focused on the fact that the conservative radio host called his own words "insulting" and that his apology went "much further than the words used by the Republican presidential candidates, whose condemnations all came with equivocations or deflections." [See video below. MP3 audio here.]

No love on the Sunday morning television talk shows for Rush Limbaugh, not even a mild defense as the unifying theme was disappointment in Mitt Romney for not denouncing the leading national conservative talk radio host. “The problem with Rush Limbaugh,” NBC News White House correspondent Savannah Guthrie complained in pretending to care about the fate of Republicans, “is that he re-framed the debate on Democrat’s terms” and “Romney lost an opportunity there to speak out forcefully against” Limbaugh which “would have shown some political courage, some backbone and ultimately,” she argued, “that would help him with conservatives.”

Meet the Press host David Gregory jumped in to assert “Sister Souljah’s not just a rap reference, it’s a political reference.” He cued up Republican strategist/Romney backer Mike Murphy: “Was this a ‘Sister Souljah Moment’ that Romney missed?” Murphy, naturally, agreed as he added in a snarky shot at Limbaugh: “It could have been and it should have been. The big myth about Rush Limbaugh is he can’t deliver a pizza let alone a vote.”

According to ABC analyst Matthew Dowd, the fact that Rick Perry's wife, Anita, has been publicly touting her husband means the candidate is floundering. Making a blanket statement on Thursday's Good Morning America, Dowd declared, "...Any time you have a wife go out on the trail, you know that you- basically, the campaign's in trouble."

He added, "If you start putting your wife out there in a front and center way, you got your campaign in trouble." GMA anchor George Stephanopoulos didn't jump in to contest this assertion. Yet, this same program didn't spin Michelle Obama campaigning for her husband as desperate.

Liberals are "pro" and bestow rights on people. Conservatives are "anti" and negative. That's the impressions that viewers would get from watching ABC. On Tuesday, Good Morning America's Bianna Golodryga mentioned the possible presidential candidacy of George Pataki, noting the former New York governor is "pro-choice, pro-union and pro-gay rights."

Arianna Replies: It Was ABC's Matthew Dowd Who Said Rubio Looked Like a 'Dictator'

So what exactly was the Queen of social news media’s tweet really about? Once the “dictator” part of Arianna’s insults is stripped away, what’s left is “Central American,” and that’s the crux of her tweet. She is playing the race card with Marco Rubio. Of course the mainstream media will fail to notice that this is a racist comment, which is no less racist than if a Republican compared Obama to Idi Amin. Is there any doubt that Arianna Huffington and her Huffington Post empire would not be leading the charge to destroy the person who uttered that unfortunate analogy?

Today, Huffington replied on Twitter to Breitbart: My tweet was merely quoting, with his consent, GOP strategist Matthew Dowd’s take on Rubio’s acceptance speech. Next! 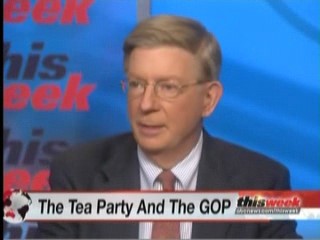 George Will on Sunday gave a much-needed education to the entire "This Week" panel about how the Tea Party is moving the GOP in a positive direction that could alter politics in this nation for years to come.

As Christiane Amanpour and her Roundtable guests - Democrat strategist Donna Brazile, National Journal's Ron Brownstein, and Republican strategist Matthew Dowd - all fretted about the so-called Civil War brewing in the GOP, Will was once again the voice of reason.

"At the beginning of the year, the question was, will the Tea Party people play nicely with others and will they obey the rules of politics? Who's sort of not playing nicely?" asked Will.

"Mr. Crist starts losing the primary to a Tea Party favorite Rubio. He suddenly discovers that he's an independent and changes all his views overnight," he continued.

"Mrs. Murkowski loses a primary and suddenly discovers that she has a property right in her Senate seat and she's going to run as a write-in. Senator Bennett thought of that in Utah, Senator Castle in Delaware is thinking of a write-in candidate. Who are the extremists?" (video follows with transcript and commentary):

ABC's George Stephanopoulos actually brought up the ClimateGate scandal as a topic for discussion during the Roundtable segment on Sunday's "This Week."

As NewsBusters has been reporting since this story broke more than a week ago, television news outlets have been quite disinterested in the controversy now growing with each passing day.

Breaking this trend, Stephanopoulos aggressively waded into this seemingly verboten subject by mentioning how it complicates President Obama's trip to "Copenhagen to deal with climate change."

George Will of course agreed saying that the release of these e-mail messages raises a serious question about why America should "wager trillions of dollars and substantially curtail freedom on climate models that are imperfect and unproven."

Not surprisingly, New York Times columnist Paul Krugman found "not a single smoking gun" in those e-mail messages (video in two parts embedded below the fold with transcript and commentary by myself and others involved in this debate):

Watching Saturday’s network morning shows, the talking heads seemed to agree that Friday night’s debate did not produce “a clear winner” or any “knockout punch,” and that it was unlikely that any “needle was moved” among undecided voters. Yet those same networks tried to also argue that Obama had really won the debate, superficially suggesting that McCain’s “disdainful” body language poorly contrasted with the “warm” and “deferential” Obama.

On style, “Barack Obama did a much better job,” ABC contributor Matthew Dowd asserted. NBC’s Chuck Todd insisted that “McCain barely could look at Obama, was disdainful at times, almost annoyed that he was having to share the same stage....Here was Obama being deferential, and here is McCain being disdainful.” 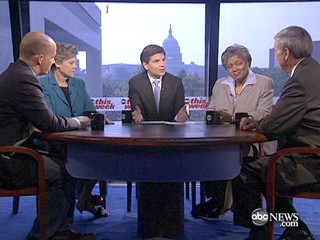 When ABC's George Stephanopoulos, along with three-fourths of his panel, pile on a Democrat with the cameras rolling, you know said liberal elected official made a blunder of epic proportions.

Such was the case on Sunday's "This Week" when with the exception of Democrat pol Donna Brazile, it was virtually unanimous that Democrat presidential nominee Barack Obama's decision to go back on his campaign promise to accept public funds was "a big, big deal and a big, big flip-flop."

Readers should brace themselves for an alternate reality, as in a strange moment in television news history, George Stephanopoulos, Cokie Roberts, Sam Donaldson, and Matt Dowd actually agreed that the Obamessiah made a serious boo boo (video available here, Brazile's sycophancy removed for what should be obvious reasons, picture courtesy ABC News):