To commemorate Presidents Day and Washington's Birthday, last week I highlighted the first four of the top 10 reasons I wish George Washington were still alive:

10) Washington was a role model for many, even as a youth.

When President Barack Obama was re-elected, the winds waned behind many patriots' ships' sails. My wife, Gena, and I felt that sock in the gut for our country and posterity, too. But instead of cowering in defeat, I believe we need to discard conventional (unsuccessful) strategies and advance in new directions.

The future of our country is going to hinge not upon the Republican Party's reinvention (as so many think) but upon each of us patriots asking what isn't working about our approach and modifying our attacks for greater impact in the culture and political wars. You don't fight and win unconventional wars with conventional weapons; that's why we lost in November.

Last week, I summarized how President Barack Obama has not lived up to his campaign promises to lower the national deficit and debt and get our nation's fiscal house in order. So now I'm calling on him to heed the economic advice of our nation's first eight presidents.

Before I highlight some of the Founding Fathers' wisdom on federal debt and spending, let me remind readers how Crossroads GPS recently summarized Obama's relation to national debt:

On Wednesday's CBS Evening News, after a report in which it was noted that the Obama administration has invoked executive privilege over the investigation into the Fast and Furious scandal, anchor Scott Pelley related the history of other Presidents taking similar measures.

During an interview with former Speaker of the House Newt Gingrich on Hardball Thursday, the host disparaged George Washington as an elite "with a couple of hundred slaves" (video follows with transcript and commentary): 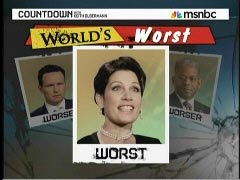 On Monday’s Countdown show, MSNBC host Keith Olbermann mocked Minnesota Republican Congresswoman Michele Bachmann, tagging her as "Worst Person in the World," for her recent declaration in an interview with World Net Daily that she would like to dine with Jesus Christ, Ann Coulter and a number of other historical and public figures. In addition to cracking that Coulter would accuse Jesus of being gay and that conservative talk radio host Mark Levin would "run out on the check," the MSNBC host concluded that Jesus would try to stop Bachmann and presumably other conservatives from "mak[ing] the House of Representatives a house of morons."

Olbermann: "Coulter would question Jesus’s sexuality. Levin would run out on the check. And Jesus would shout, "Get these out of here. Do not make the House of Representatives a house of morons," and then turn over the table. You know, like in the Real Housewives of New Jersey."

The Countdown host went on to mock the conservative concept of adhering to the original intent of the Constitution as meaning slavery would be legal and that women would not have the right to vote. Olbermann:

From the Archive: George Washington Fought Revolutionary War ‘For Profit’

With the rise of the Tea Party, their push for constitutional limits on government power and admiration for the wisdom of the Founding Fathers, I thought I’d use this last holiday of the summer as an opportunity to post an item from the MRC’s archive which exposed how a major cable network once tried to discredit George Washington’s moral authority in history, and thus the legitimacy of the Revolutionary War.

In an A&E movie, aired in 2000, on George Washington crossing the Delaware, The Crossing, he is persuaded that just like the hired-gun Hessians, his opposition to British taxes means he too is fighting “for profit.” Jeff Daniels, playing George Washington, decries the Hessians: “You want me to weep for those bastards, men who kill for profit?” General Nathanial Greene counters: “Our own cause is, at its heart, a fight against British taxation, is it not? In the end sir, we all kill for profit -- the British and the Hessians, and us.” That convinces Washington.

“That spin is no surprise,” a 2000 MRC CyberAlert item noted, “when you learn that the screenplay was written by a communist. Really.”

Letterman: Washington Rolls Over in Grave if Palin Elected President

UPDATE AT END OF POST: Letterman also took a swipe at Palin during his opening monologue.

On Monday, the "Late Show" host used his Top Ten list to disparage the former governor of Alaska claiming that George Washington would roll over in his grave if Palin were elected president.

Never mind that she hasn't announced her candidacy or that the presidential election is more than two and a half years away.

Such inconvenient truths don't phase Letterman for in a list of the "Top Ten Things George Washington Would Say If He Were Alive Today," a woman the "Late Show" host probably never heard of two years ago actually came in second (video embedded below the fold with complete list, h/t Story Balloon):

See UPDATE at foot: Gen. Petraeus subsequently testified to the importance of Iraq to national security.

In the wake of the odious MoveOn.org ad calling our commander in Iraq "General Betray Us," [read Dean Barnett's excellent take here] you might have thought the last thing a responsible member of the media would do would be to accuse other senior officials of "betrayal."

I did say "responsible." On this afternoon's "Hardball," Chris Matthews accused President Bush of "betrayal" for his handling of Iraq.

The "Hardball" host was fuming over Gen. Petraeus's reluctance to state whether the war in Iraq would make America safer.