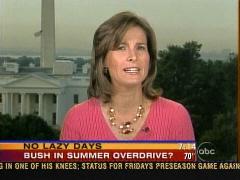 ABC’s Claire Shipman appeared eager to trot out more Democratic hyperbole on President Bush’s handling of Iraq during Tuesday’s "Good Morning America." Setting up Shipman’s piece, GMA anchor Robin Roberts reported on the latest USA Today/Gallup poll, which found President Bush’s overall job approval rating up to 42%. Minutes later, discussing the President’s stance on the war in Iraq, Shipman asserted that during his Monday news conference, the President "offered no real softening of a policy that grows more unpopular by the day, even among Republicans."

An examination of the same USA Today/Gallup poll that Roberts reported on shows that 36% of those polled approve of President Bush’s handling of Iraq. This is actually a one percent increase since USA Today/Gallup last measured public opinion on the issue in July.

While still low, the poll shows that public opinion on the President’s handling of Iraq is, if anything, holding steady, not growing "more unpopular by the day." This appears to be another demonstration of the liberal media going beyond the facts to put their own spin on the war: bad for President Bush, bad for Republicans, bad for America.

Relevant portions from the 7:15am EDT report follows:

Robin Roberts: "On a day when he ordinarily would be vacationing, President Bush is hard at work today, in overdrive, some would say. He is heading to Minnesota to campaign, part of a blitz to boost Republican candidates around the nation, and he’s got some wind in his sails. A USA Today/Gallup poll, out this morning, says the President's approval ratings, 42 percent, his highest rating in some six months..."

Claire Shipman: "..It’s an unusual sight, the President holding forth in the briefing room in mid-August. With no news to trumpet, the grim reality of Iraq became the 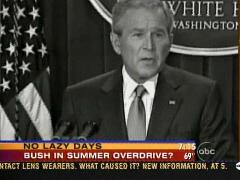 centerpiece...And he was typically testy on that subject, especially as regards critics."

President George W. Bush: "They want to leave before the job is completed in Iraq."

Shipman: "But he offered no real softening of a policy that grows more unpopular by the day, even among Republicans. Indeed, he repeatedly made plain the U.S. will not pull out."

Like a negative political ad for the opposition, as Shipman spoke her two sentences about Bush refusing to soften his policy, his picture transformed to black and white and zoomed in, crowding out the top of his head.